Welcome to Konami's Brooktown High, or as I like to call this morally reprehensible little gem, The Training Manual for Deserving School-Shooting Victims

R&amp;C has always provided the gamer with a full, challenging, and fun experience. As far as I know, they've got the 'Lombax mechanic with wrench and robot pal' niche sewn up. 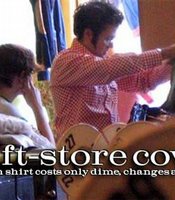 For those who had a prosperous year, Christmas morning held the promise of a nice goose and a plump red visitor with an engorged sack filling your flue. Who doesn't dream of being smothered in a flood of oversized packages swollen with the love of their fellow man? Who indeed? 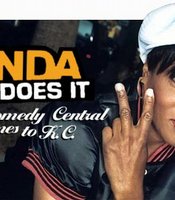 Wanda (Sykes) does it

Wanda Sykes has one of those voices that makes you laugh no matter what she's saying. Her segments on Comedy Central's "Crank Yankers," for instance, where she's complaining to a mechanic about the, uh, dookie left in her back seat, or calling a prison to arrange a conjugal visit - with anyone who's up for it - are among the show's most hilarious moments.

In real life, our childhood fantasies are frequently pushed aside in order to try making a living writing snotty little "stories" about other peoples' jobs instead of pursuing dreams of a cowboy life. Um, for example. But in real life, horses do exist, and some stalwart men and women ride the range rounding up doggies or something. And real-life robbers from lower-income neighborhoods are busted by real-life cops. There are even real astronauts, believe it or not. And some people actually ignore the sphincter-tightening reality that fire is something you run away from. Fast.

Q&A with King Buzzo of The Melvins

The new Melvins record is a collaboration with a guy named Lustmord called "Pigs of the Roman Empire." The cover is on the back. And that's just the beginning of the sass. King Buzzo (above, center) has been defying convention with his band Melvins for 20 years. They've weathered major label contracts, tours with White Zombie, and "Dookie," and have emerged as smooth and freakish as a two-headed snake. How, you may ask. Dunno. lawrence.com spoke with the miraculously locked monarch about literally thousands of topics, all of which can be found at lawrence.com, but some right here.

A lot about Sebadoh seems accidental. The band's very existence began as a side project for Lou Barlow, who was trying to cope with playing bass in the less-than-democratic environment of the band Dinosaur Jr.