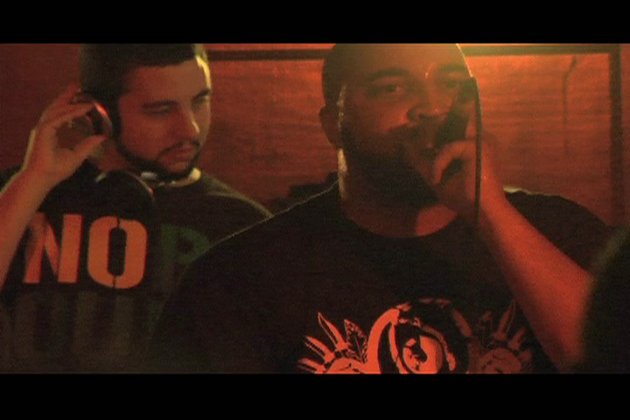 The I-70 Series makes a pit stop in Lawrence, topping off the local hip hop scene while sparing enough time to check their tire pressure and fill up on Pita Pit. Co-hosts Ryan Johnson and Kyle sit down with some of the Midwest's finest rappers including Stik Figa, Steddy P, Dutch Newman, and Earthworms. So take the next off ramp (the East Lawrence exit is finally open) and get ready for the pyroclastic flow.

Though lo-fi, surf-pop has made a resurgence over the past few years, one can't help but feel it either leans towards the more experimental (Animal Collective) or the infectiously danceable (Surfer Blood). That's why the precocious sounds of Real Estate feel like a return to form when compared to bands of the same ilk. Co-hosts, Ryan Johnson and Kyle Sheline, chill with the Jersey boys before their show at The Jackpot Saloon. photo by Colin O'Neill

Katlyn Conroy and the Wild and Wooly

Katlyn Conroy has lent her voice to a number of bands over the past few years, but with the Wild and Wooly, she's found a place to flex her own songwriting skills. With a mesmerizing stage presence and a tight band comprised of members of Another Holiday, Katlyn is proving that you don't need to look outside of Lawrence for the next best singer-songwriter; she's already here.

UUVVWWZ (pronounced Double 'U' Double 'V' Double 'W'...'Z') might have one of the most ponderous band names ever, which in this case is a good thing considering the group's eccentric sound. Part art rock with a dash of experimental blues, the Nebraska quartet has a little something for everyone. AK Brashear sits down with UUVVWWZ to discuss the band's unique songwriting practices and how he might improve his own name by adding more random letters.

On the third installment of The Turnpike Music Showcase , The Appleseed Cast deliver an epic performance fit for any admirer of the preeminent Lawrence rock group. With over a decade of music making under their belts and the creation of some of the best post-rock to ever come out of the Midwest, it is our great honor to have these guys on our show. Host AK Brashear sits down with group founders, Chris Crisci and Aaron Pillar, along with recent additions, John Momberg and Nate Whitman, to get some perspective on the band's continuing journey.