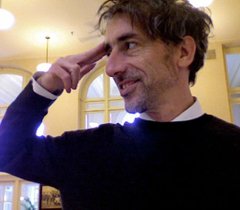 I do hope you'll be blogging remotely :)

I'd love to see a similar treatment of the Pistols' "Bodies."

I'm not so sure that Time's "You" is everyone who uses a computer. Rather it's everyone who, rather than simply being a passive consumer of content, becomes an active producer of content. And that's very cool.

"It's a story about community and collaboration on a scale never seen before. It's about the cosmic compendium of knowledge Wikipedia and the million-channel people's network YouTube and the online metropolis MySpace. It's about the many wresting power from the few and helping one another for nothing and how that will not only change the world, but also change the way the world changes."

"You can learn more about how Americans live just by looking at the backgrounds of YouTube videos-those rumpled bedrooms and toy-strewn basement rec rooms-than you could from 1,000 hours of network television."

Or, in other words, 2006 is much like what happened with Ronald Reagan in the '80s with so-called "Reagan Democrats." As he put it, "I didn't leave the Democratic party. The Democratic party left me." In the '80's, then, according to the logic making the punditry-rounds, the Reagan Revolution was "really" a Democratic infiltration.

Or, much like what happened in the '50s and 60's when white southerners abandoned the Democratic party for the Republican party as a result of civil rights legislation. Dixiecrat Democrats and many voters, unsupportive of the national civil rights push, found a better home in the Republican party and eventually gave Nixon his majority. LBJ is widely credited with remarking that the Civil Rights Act of 1964 would result in losing the South to Republicans for a generation. He was right. Those erstwhile Democrats who did not support civil rights legislation became Republicans.

Or, 2006 is much like what happened when the country as whole left the Republicans for FDR in the Depression.

In other words, what we've seen in 2006 is America as usual, in all its wonderful electoral complexity.

When a political party stops representing what you believe, or what you want, you leave it; and usually, in America, that means going over to the other party in our 2-party system.

To accept the proposition that what 2006 "really" represents is a victory for Republicans and conservative principles, and not, as it would appear on its face, a win for Democrats on the order of Republican wins under Gingrich in 1994 (an idea finding articulation in many areas of the media, mainstream and not) -- because, the thinking goes, like Reagan's leaving the Democratic party to become a Republican, many candidates left the Republican party to run and win as Democrats -- would mean to accept that the Reagan revolution "really" represented a victory for Democrats, since Reagan's electoral success depended on previously life-long Democratic voters.

Both are fairly dissonant perspectives to maintain, cognition-wise.

"and both are home to hillbillies grappling at one stage or another with substance abuse problems."

"The aspens are starting to turn"?

Are you communicating in code to Judith Miller?

A good book? Or a book that's good for you?

"can we at least tease people who admit to reading Proust?"

Though I'd argue it's a little simplistic and disengenous to assert that the judicial branch has no role to play in insuring the state - be that the legislature, the governor, what have you - be bound by the constitution. Judges are "unelected" for a reason, which I'm sure you're aware of.

But that's, likely, another discussion.

As for the laying out of what a libertarian candidacy might look and act like, quite interesting.

p15: The Gospel according to Mark