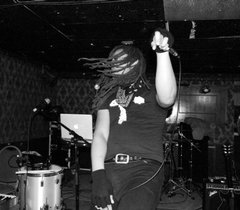 I'm glad to see that this article has generated a healthy dialogue both online and in the Lawrence music community. A good number of our contemporaries across a few genres have approached me about it in the last couple weeks.

As far as piracy goes, I feel like it's a much less black-&-white than most people might like it to be. Yes, it affects all musicians at all levels. Whether that's positively or negatively depends on a band or artist's interaction with their potential fanbase. In either case it's important that whatever precedent you set stays consistent as you, your music and your audience grow.

In my opinion if you work really hard and create quality music you shouldn't automatically be expected to give it away. Especially if it's good! There's no other transaction-based industry where those are acceptable terms.

HOWEVER, I can't tell you how many CDs I've been happy to give away to new friends we've made on tour. I feel like if someone has paid admission to see you play, paid attention to your performance and shared some kind words with you afterward, that's a valid transaction. It's much harder to gauge what kind of impact your music is having on an mp3 aggregator pumping out of low-grade computer speakers.

HOWEVER, I've discovered some of my favorite bands under just those circumstances. If it gives someone an opportunity to get a glimpse into my work then what's so wrong with that? Why not?

Ultimately, the worst effect that piracy has had on a band like Cowboy Indian Bear is the threshold you must reach to grab the attention of labels, independent or mainstream, is unreal at this point. In 2002, if you moved 1,000-5,000 units in a calendar year independently you could entertain the possibility of a decent-size indie at least having a conversation with you when you came to their city. Now you'd be lucky to get a form letter e-mail reply.

Not that signing to a label in 2012-13 is going to be the best solution for every band but it nevertheless is a model that PR & media still base their industries around. People mistakenly think that "staying indie" is easier than it ever was but with no financial backing, valid press outlets or consistent revenue stream (unless you have a REALLY great relationship with your audience, digital service is not going to make you money. Your music is largely getting pirated no matter what) it's harder than ever before. Granted, there are lots of exceptions but no working model for one artist ever translates fool-proof to another, not these days.

Oh, you mean people with no style?

This show actually takes place on SAT JUN 25th, not on the above date. Sorry for the confusion.

Barr, you haven't washed your hair in months. Neither have I.

Unfortunately Ghosty will not be joining us but THE SNUGGLE BUGS are on the bill instead!

Also, we are raising money for Lawrence, KS' Family Promise, an organization serving homeless families for long-term periods. Please take a look at their website:

All monies from the bake sale, games and contests will go directly to Family Promise. There will be materials available with more information and a donation bucket.

This show is actually ALL AGES! Kansas City's Capybara is on the bill as well and they play 1st! 9 pm SHARP!

Heartbreaking. They have a pretty good crew over there these days. Sorry to hear it.