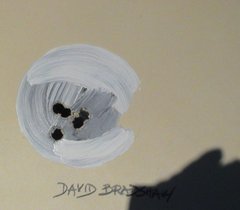 I wonder at you looking for someone to blame for your actions. It is ironic that you choose William. I don't know where you got the idea that William was impoverished. I had heard of Burroughs Adding machines before I heard of William. You said "As much as we'd like to laud him as someone who was there, man, who got persecuted and busted and lived in poverty and exile, the "authenticity" of his experiences is suspect"

While there was never the wealth rumored,and there was never a trust fund. The burroughs family sold their interest before the company became a national concern. A little like the colnel did with KFC, money but not wealth. Anyone who thought any of these guys, William, Allen, Jack were impoverished, hey they met at college and William graduated from Harvard. I am sure he was broke at times. I also know he had jobs and worked. To blame William for your treatment of others is the most telling part of your arguement. You might believe that William protrayed himself as impoverished, but he didn't. You might believe he never had to have a job, but he did. People sometimes believe because someones family has money their jobs don't count as real jobs, and their work isn't real work but that is incorrect. He had a lot of gifts and a lot of faults. There is the cult and myths abound and you are right to question the worship of the myth or a man. Celebrity is an odd creature with it's seperate life but even if you believed William was impoverished and never worked a little home work should of disabused you of those assumptions.