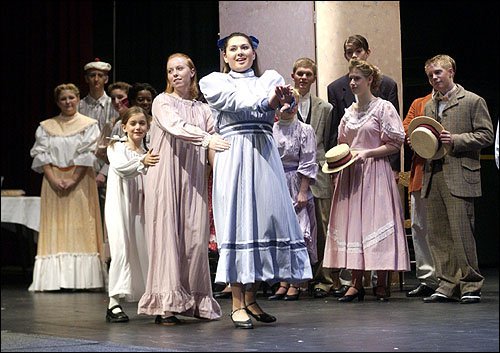 Whitney Juneau as Esther Smith leads Anna Cluff as Agnes Smith and Mallory McFall as Tootie Smith during a scene from "Meet Me in St. Louis," a musical being staged this weekend at Lawrence High School. Set at the time of the 1904 St. Louis World's Fair, the play tells the story of the Smith family and features musical favorites such as "The Boy Next Door," "The Trolley Song" and "Have Yourself a Merry Little Christmas." The show opened Thursday and plays again at 7:30 p.m. today and Saturday at the high school, 1901 La. Tickets are $6.