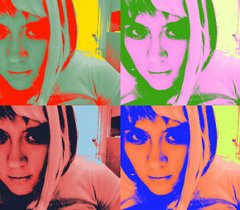 If Life Gives You Lemons, Preserve Them.

I think the answer here is probably obvious, but do you suppose you could do this with limes as well? Because my fixation with sour tartness means I often prefer limes over lemons... I'm excited to try this though. Summertime means I start infusing vodka, and I think preserving fruits will be a nice addition to my candy-colored jar-lined cupboards!

I think we've strayed away from the point, at least, I guess, the point that I was supporting/trying to make.

First of all, please do not ever again compare "me" to Jessica Simpson because of my age. EVER. I think everyone can agree that using the Beatles versus Jessica Simpson as a comparison of the talents of "old" people versus the talents of younger people is ludicrous, and clearly tailoring a point to your favor.

I think what Dot was trying to say is that we can no more write off a person in their 30's or 40's as out of shape and out of business than we can write off someone in their early 20's because they know nor understand nothing. Folks, that's ageism. You shouldn't disagree with McVey's imagery because he's young, but certainly, (and I believe that you do Tex), disagree with his work because you follow a different spiritual path. There's nothing wrong with that.

What I DO think is due to a little bit of youthful indiscretion is the use of shocking, weak images to convey a much more deep and almost "academic" idea. As I said before, I saw this in my studio classes a lot. But we're learning, aren't we? It takes time, energy, and trial after trial to learn how to convey messages in your art without overtly and glaringly throwing them in your audience's face. Maybe he's just not there yet. And hey--if in fact he wanted it to be this obvious, I still (and maybe for reasons I don't understand, just a feeling?) don't think that he's trying to spit in the face of Christians. I mean, how is this really any different than the people who stand up downtown or on campus and yell about how we're all sinners who must repent or pay the dire, dire consequences? Because that is offensive to me.

Read It and Weep

A-ha! Murdoch's addressing the state of affairs in newspaper-land... predicting that all his News Corporation-owned newspaper websites will be charging for use within 12 months. He also claims that 360,000 people have downloaded a Wall-Street Journal iPhone app within three weeks, and that prices for such services were about to rise.

Welcome to the blogosphere, Katy!

I'm a big fan of the form-fitting dress as tucked-in shirt idea. Never considered that before. And as far as awesome, straight out of Great Expectations gold jewelry goes, there's no place better than the Antique Mall!

On the futility of bailouts

Perhaps we could take tip from France, where Christine Lagarde, Minister of Finance, actually fired the leaders of some of their top banks, holding people accountable for the failure of such large institutions instead of putting billion-dollar, diamond encrusted band-aids on them. If we don't want huge institutions to crumble, thus crippling cities where they hold such a large stake in the labor force, could we at least look at how to restructure them and make them work?

The French have also weathered the global economic failure better than most of the other G-20 nations because they have such a stable benefits plan in place for their citizens--real Social Security benefits and unemployment assistance that has allowed much of its population to survive.

Of course, no matter how much I try to pay attention to the news and progress of this whole big economic mess, I was an Art History major... I can't pretend to know or understand much.

No Butts About It

Thanks for sharing Meatwad! That is hilarious. I think I will go find that story on npr.com now...

I'm not sure if I enjoyed that because you began with a challenge of sorts, or because it was entertaining (probably both!), but that was great!

Glad the delivery went well and good luck with the newborn. Hopefully you'll get some time to post more.

But I certainly hope that if I ever post a story on here about my views of religion or politics, or share pictures of my artwork and you happen to not like it, I'm not equated to a child throwing a temper tantrum over sweets.

I have to say that comparing a child throwing a temper tantrum - throwing his shoe at his mother, all because he was denied a cinnamon role - to someone's music album with a controversial cover (or image rather, because as he says in his interview, it's actually inside under the CD) is not a fair nor helpful argument. Sure, it's inherently shock value, but that "contemptible" photo and McVey's interview are certainly not suggestive of anger. Confusion. Perhaps disgust. Irritation and disbelief... all likely. But anger? And especially pure, childish anger in the vein of "my mother should give me what I want whenever I want it"? No.

As a former studio art student at KU, I saw kids make art like this all time. No, not necessarily pushing knee-jerk religious buttons, but art that is likely too blatant or obvious to make an effective, intelligent point. But every time a piece like that was created, the intentions were honest. And no matter how much I dislike trite, "shocking" artwork that doesn't seem to dig deep enough, it's somebody DOING something, instead of stagnantly complaining about things. Why then should anyone sit at home on their computer and anonymously reprimand a young kid for doing something constructive with his time?

The Burrough's quote is interesting because as much as I enjoy reading him, I still disagree. What a horrible way to go through life, assuming that you will regret the things you do, every day. McVey might look back on this in 10 years and feel a little ashamed, or maybe he'll laugh at it, but wouldn't you rather he learned that this method of finding answers didn't work for him so he moved on to searching another venue? And if you do want him to feel regretful about it, then you're only suggesting that because you hold beliefs that you feel are right and morally superior to his, and that, once again, is not fair nor constructive.

Throw Your Hands in the Air, But Please Take Care

Thanks for coming to Steddy's defense. That's great-that's just what every local musician needs. I apologize if any of it came off a little harsh. I did actually enjoy his show...sometimes I can get caught up in my "poetic license" and forget to explain things for the sake of flow (maybe something Steddy himself would understand!?).

I really think my only complaint was that I just didn't understand why he kept talking about KC. I mean, even if he had mentioned KC in tandem with the Lawrence scene, that would have been great. I get it. Kansas City has a great support group of hip hop artists, but it just felt so out of place to keep talking about it at an all ages show in Lawrence where half of the audience was underage and thus likely from Lawrence. If he does support and know so much about the local Lawrence scene, why not use that to his advantage to engage the crowd, especially a crowd who doesn't know who you are?