The students are back in town and hopefully they won't run over you as you make your way to this weekend's cavalcade of cowboy cabarets, "candy-ass dance parties," and fiddling and picking contests in South Park. Good luck!

The Kansas State Fiddling and Picking Championships is an event somewhat bittersweet in its implications, arriving at the end of August and marking the official end of another summer in Lawrence. The event itself, however, is always a stellar day to witness the state's best fiddlers and pickers (and a few concerts from local bluegrass bands) while eating and drinking in South Park. Free State Brewery has been on hand with beer in recent years.

Can't wait till Sunday? Get a jump on the picking and grinning with a Friday matinee at Replay featuring Old Fangled and Alferd Packer Memorial String Band. Details here on this pre-party.

Visit the official Kansas Fiddling and Picking website for more information and a schedule of Sunday's events. 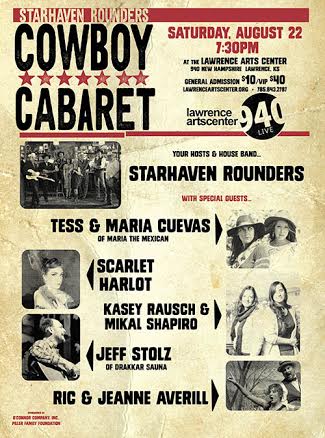 "Cowboy Cabaret" seems like an odd and unexpected combination of words, but this event from LAC's typically-excellent 940 Live music series is shaping up to be a memorable evening.

We've had several good times listening to KC's Starhaven Rounders play their country covers on the Replay patio. Mix in a bevy of special guests (including Drakkar Sauna's Jeff Stolz and the members of Maria the Mexican) and this should become a good old-fashioned Saturday night hootenanny.

We asked Kirsten Paludan, a Rounders member as well as the director/co-producer/co-creator of this show, to give us a rundown on why the Cowboy Cabaret is a must-see weekend event. Here's a short list of her reasons: 1) it's a rare chance to see cool local artists performing with a full-on country-and-western backing band; 2) it has its own theme song; 3) an appearance is expected from a "rather frisky donkey." Sold! High-rolling cowboys and cowgirls should also inquire about the VIP option, which includes a pre-show party with the cast onstage plus free beer and BBQ.

Check out more from Paludan about what the show has in store in this LJWorld piece. 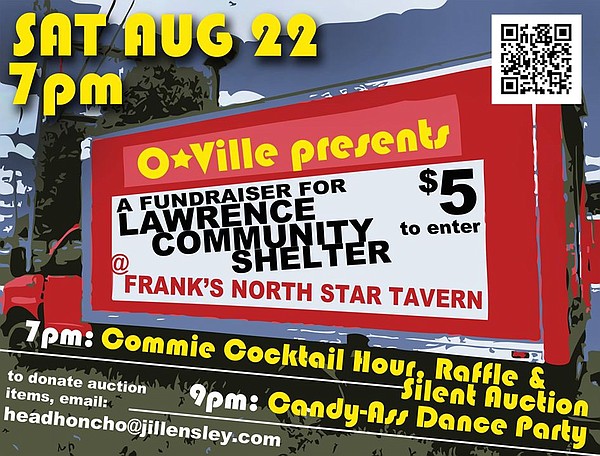 Saturday brings a good opportunity give back to the community at an unusual fundraiser centered around the recent Payless Furniture controversy in which owner Bob Fyfe claimed that the city of Lawrence was essentially "Obamaville" and deemed its residents a bunch of "Commies and candy-asses." Longtime Lawrencians, of course, decided to embrace these designations!

This benefit for the Lawrence Community Shelter kicks off with "Commie Cocktail Hour," in which guests are invited to wear red (get it??) and enjoy a silent auction and raffle. This is followed by a "Candy-Ass Dance Party" in Frank's basement. You can also order Christine Maki's in-demand "Commies and Candy-Asses" T-shirts at the event.

Find all the necessary details at the Facebook event page and head to Frank's to shake those candy-asses. 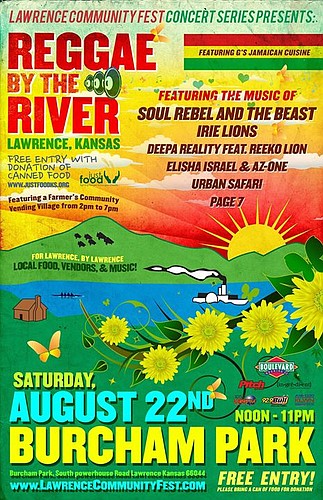 Reggae by the River, noon to 11 p.m. Saturday at Burcham Park

Summer is waning but the music festivals aren't quite over. Head to Burcham Park for the first-ever Reggae by the River, an event presented by the Lawrence Community Fest organization.

One can of food (but be kind and bring several) is the only cover charge for this otherwise free event that seeks to collect 5,000 cans of food for needy Douglas County residents.

Twenty food vendors are slated to be on hand, as well as a "Farmer's Community Vending Village" in the afternoon. The event also bills itself on the Facebook event page as "family friendly, dog friendly, cooler friendly." The last one seems very surprising, if true. Won't that cut down on beer sales? 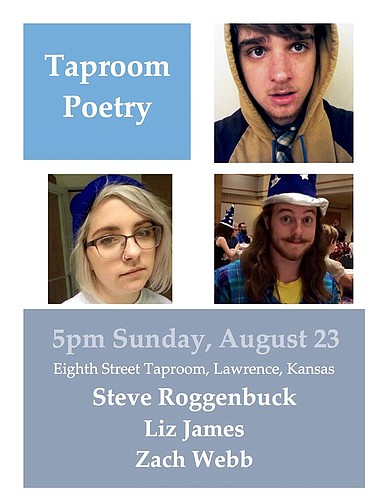 According to a 2014 piece in The New Yorker, the work of Steve Roggenbuck might be similar to what Walt Whitman would produce if he were alive and "vlogging." The New Yorker terms Roggenbuck a true "internet poet" in that his poetry "is made, distributed, and viewed almost exclusively on the Web, taking the form of tweets, Facebook posts, YouTube videos, and image macros."

In addition to The New Yorker, Roggenbuck's work has been discussed by media outlets from Rolling Stone to The Guardian, and an exhibit of his videos is currently on display at the New Museum's 2015 Triennial.

Local writers Liz James and Zach Webb round out the bill along with an open-mic reading.

The Facebook event page has more details on the event. 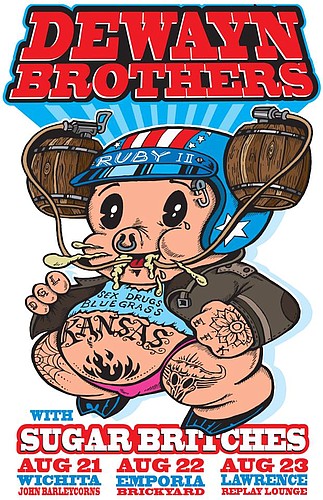 If you're looking for a considerably rowdier alternative to Sunday poetry or a perfect follow-up to Sunday's picking and grinning in South Park, look no further than the Replay patio, where one of the region's very best bluegrass bands, Dewayn Brothers, will make an increasingly rare Lawrence appearance for a barn-burner of a Sunday matinee.

Hailing from Emporia, Dewayn Brothers list their genre as "Kansas bluegrass." We're not 100 percent sure what distinguishes Kansas bluegrass from other forms but we know to expect a full dance floor and drunken stomping. LFK's ever-sassy and ever-present Sugar Britches will open the show at 5.

Yes, work and/or school looms the next morning but, for these three hours with a patio beer in hand, you simply won't care. The Facebook event page lists 100+ guests. The flier above offers a nice feel of the vibe for the Dewayn's current three-city weekend-whirlwind tour with the Britches. 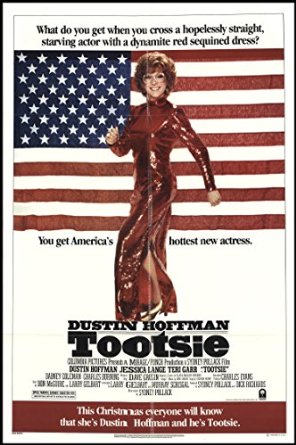 Our Weekend Picks are unusually Sunday-heavy this week, but we couldn't dare leave out Liberty Hall's screening of "Tootsie."

If you haven't seen Sydney Pollack's 1982 classic in awhile, rest assured it holds up as one of the most finely crafted comedies ever made, with impeccable performances from Jessica Lange, Teri Garr, Dabney Coleman, Charles Durning, and Bill Murray in addition to Dustin Hoffman's legendary title role.

Since this is an official Film Church presentation, expect Liberty Hall manager Maggie Allen to kick things off with a short "sermon" explaining the film's continuing importance (in her typically humorous fashion).

Tweet us @LarryvilleLife with under-the-radar ideas about next week's Final Friday events.