Recent columns have focused on family-friendly summer fare, but send the kids to bed for (most of) this column. We're here to talk about indie theater, Comedy Freakouts, ASSJAMZ and GWAR. 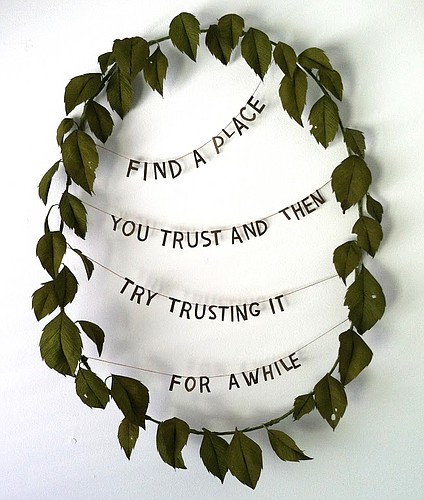 Art Opening: Grace D. Chin's "Find a Place You Trust and Then Try Trusting It For Awhile," 6 p.m. Friday at Bourgeois Pig

We often showcase less-traditional Final Friday events, such as last month's Wonder Fair "performance art" walking tours. But this month we wanted to bring attention back to the kind of art that's hanging on the wall!

Stop by the Pig for Grace D. Chin's show, which takes its interesting title from a list of rules intended for young artists that was composed by artist/activist Sister Corita Kent. Chin says this collection reveals her search for "pithy, compelling statements that can live with and empower a person daily."

If you're like us, you've been wandering around saying "SERENITY NOW" ever since the students returned to town last week. Perhaps this show will help us find some new mantras of comfort.

Find more details on the show and Chin's bio at the Facebook event page.

[Also recommended for your Final Friday art ramble: the Neil Goss/Alicia Kelly opening at Cider Gallery along with the "Food Truck Friday" event in the courtyard outside the gallery].

"Come Back to the Five and Dime, Jimmy Dean, Jimmy Dean," performances at the Percolator at 8:30 p.m. Friday-Saturday and Sept. 4, 5

We're always happy to support scrappy local theater performed in unexpected locations. Hopefully Lawrence will feel the same as Orange Mouse Theatricals stages Ed Graczyk's 1976 play "Come Back to the Five and Dime, Jimmy Dean, Jimmy Dean" at the Percolator over the course of two weekends.

The play (which was adapted for the screen by Robert Altman in 1982) concerns an all-female Jimmy Dean fan club which reunites near Marfa, Texas, where Dean filmed "Giant."

If the play alone isn't enough of a lure, Orange Mouse Theatricals is offering an "immersive event" they bill as a mix of "live theatre, an art gallery opening, shopping in an old-school 5 & Dime, popular icons from the past, root-beer floats, beer, great coffee and more!" 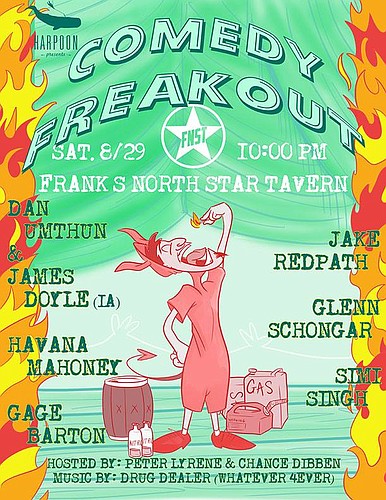 The Facebook event page suggests this could be the final installment of the (reasonably) long-running Comedy Freakout event at Frank's, so make sure to get some last laughs just in case.

This edition brings in Iowa headliners Dan Umthun and James Doyle along with the usual local yokels and hosts Peter Lyrene and Chance Dibben. Drug Dealer, from the Whatever Forever record label, will provide the tunes.

If this is indeed the last Freakout, we hope that Frank's continues to host comedy events in the future. As we always say, "Everything seems funnier when you're drunk late at night in an old cockfighting pit." 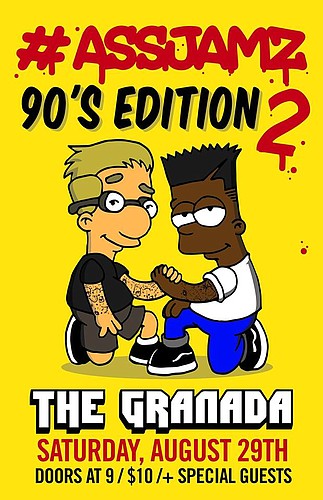 The Facebook event page commands attendees to "RELEASE YOUR BOTTLED GENIE AND SAY BYE, BYE, BYE TO SILLY POST MILLENNIAL INHIBITIONS." We don't expect this to be much of a problem.

Buying a ticket in advance via the Granada site lets you skip the (long) line at the door and impress your friends as you walk by them like a VIP. 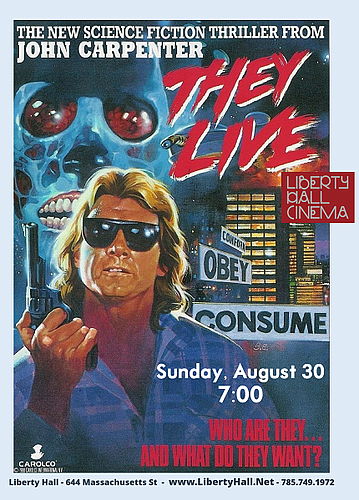 OBEY this blurb (if you catch our reference!) and head to Liberty on Sunday evening for a screening of John Carpenter's funny/scathing sci-fi satire of class issues and consumerism in Reagan-era America. The legendary fistfight scene remains hysterical and astounding in its length (six-plus minutes).

Given the recent passing of the film's star, "Rowdy" Roddy Piper, the screening should also hold sentimental value for many longtime fans of this cult classic. Hopefully the screening draws as many fans as Liberty's recent raucous screening of Carpenter's "Big Trouble in Little China." And hopefully the Carpenter screenings continue ... because we'd really like to see "The Thing" on the big-screen.

Find more info on the film at the Facebook event page. 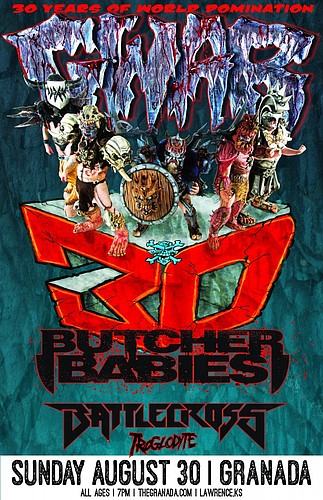 Some people will spend Sunday walking peacefully through the Fall Arts and Craft Festival at South Park. Others will pack the Granada to let a bunch of intergalactic warriors spray various "fluids" all over them.

Yes, the legendary "shock-rock" masters of GWAR are back in town and back at the Granada, which seems to be their usual stopping point when they pass through the area. Maybe it's easier to hose off the fluids there?

The band was left without any of its founding members after the death of Dave Brockie last year. However, in the spirit of the best intergalactic warriors, they still continue to rampage through the universe.

Read the full and fascinating "mythos" of GWAR at their official website and visit the Facebook event page to find out how many people are bold enough to attend.

Tweet us @LarryvilleLife with tips for next weekend's Labor Day picks.