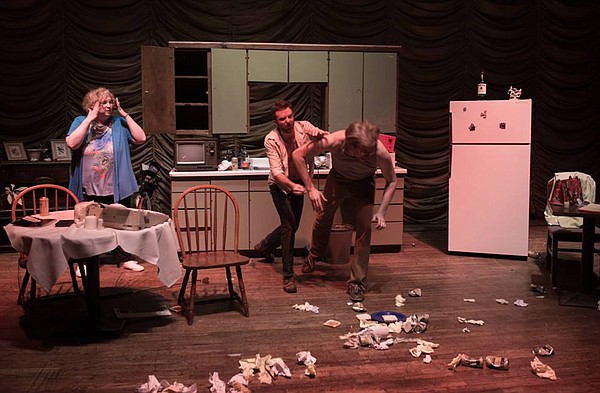 Full disclosure first. Yes, I’m friends with “True West” director Rob Schulte and some of the Card Table Theatre crew. But I’m also someone who sees a lot of Lawrence and Kansas City theater, and I’m comfortable saying that Card Table’s production of Sam Shepard’s mind-bending 1980 classic is one of the more ambitious and memorable theatrical outings the area has seen in quite some time. Even if you don’t “like” it (and most of you are going to like it), you’ll still remember and talk about it.

The venue is essential. It’s a rare thing that Liberty Hall has agreed to offer up its beautiful space for two consecutive weekends for an unusual staging of a challenging work of live theater (and particularly to a staging that only allows 60 audience members at each production). If you think you know Liberty Hall, think again.

Upon entering, the audience is directed through the wings and onto the stage itself, behind the drawn curtain, then seated in a semi-circular fashion, facing outward toward Liberty’s main room. With Liberty’s cavernous interior effectively sealed off, the audience is immediately startled out of the complacency of familiar surroundings, perhaps more able to believe themselves in a nondescript kitchen in a small home somewhere outside the Mojave Desert.

In terms of casting, Schulte’s smartest move was to further stress unfamiliarity by drawing deeper within — and even outside — the usual Card Table Theatre casting pool for his two stellar leads. Chris Roady and Derek Trautwein play Lee and Austin, two brothers holed up in their mother’s home while she is away on vacation. Roady and Trautwein are naturalistic and impressive here, effectively capturing a brotherly bond that can turn on a dime from playful banter to primal anger.

They are also boldly tackling the Broadway technique used by Philip Seymour Hoffman and John C. Reilly in which they alternate lead roles each night. Seeing both incarnations (as I did) is a wonderfully disorienting experience for the viewer and a skillful feat of acting by Roady and Trautwein (who bears an uncanny resemblance to the late, great Hoffman in some scenes).

Rounding out the cast are local comic/actor Jay Maus (suitably smarmy in his two scenes as visiting Hollywood producer Saul Kimmer) and Liberty Hall manager Maggie Allen, nearly unrecognizable as the vacationing mother, who doesn't enter the stage until the maelstrom of violence at the end.

Finally, what IS “True West” about and why will you remember it? Like most of Shepard’s work, it can be cryptic and somewhat maddening, less focused on plot than mood, which is enhanced between scenes by Brown’s quiet acoustic strumming and the buzz and howl of offstage crickets and coyotes (perhaps a bit too distractingly loud at times).

The play’s (surprisingly short) first act is a slow burn, establishing the tension and jealousy between the two brothers: one a family man and aspiring writer, the other a drifter and small-time thief.

The longer second act ratchets up the tension incrementally through short scenes that build, as most Shepard plays do, toward onstage destruction (numerous objects are bashed and flung) and shocking human violence, staged so realistically that our companion suggested the actors might need a “safe word” to prevent accidental onstage murder.

Like all great plays, it’s ultimately about us, the viewers. As Lee and Austin gradually lose sight of who they are, their identities bizarrely swapping and merging, the audience is left to question the boundaries of our own identities. How much of your brother (or your ever-absent father) actually lives within you and shapes your behavior? And can you break free of the darker implications of these forces?

Claustrophobic and intense and often darkly funny, “True West” is not a light night on the town, but it provides the kind of artistic and cultural jolt that you’re not going to find on a polite Final Friday art walk or an evening in the comfy confines of Theatre Lawrence. Embrace it while it’s here. A few tickets remain for Friday and Saturday's performances and a few more will be released in the (likely) event of sellouts.

Performances of "True West" will be 7:30 p.m. June 12 and 13 at Liberty Hall, 644 Massachusetts St. Tickets cost $15 and are available at the Liberty Hall box office and website.