This week's diverse mix of picks contains everything from circus performances to sausage-themed soirees to spoken-word poetry. Soak it up.

Sometimes we just have an inkling that a particular Nerd Nite will be epic, and this is one of those occasions.

The other talks on this body-themed evening include weightlifting and "the intrinsic code of aerial silks body wraps." We're hoping for demonstrations and show-and-tell, and we have a feeling that the Nerds will crank up Olivia Newton John's "Let's Get Physical" at least once in the evening (probably more than once). 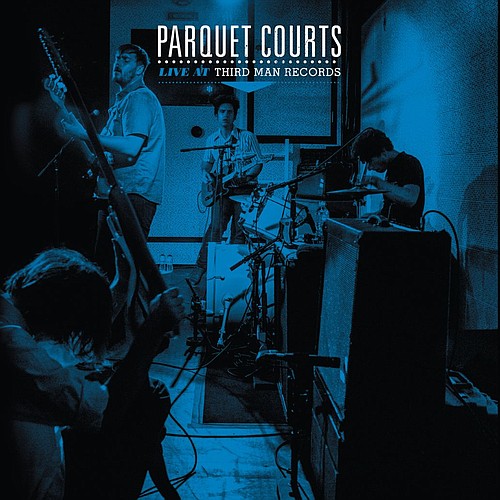 So you're telling us that the wonderfully wordy Brooklyn indie-band Parquet Courts have decided to stretch a bunch of songs out to jam-band length on a new live album recorded at Jack White's Third Man Records studio? Well... why not? After all, Pitchfork's 7.5 review assures us it all makes sense:

"Parquet Courts’ sarcastic verbosity can’t fully conceal their latent desire to lock into a groove, zone out, and coast on that perfect sound forever. And in terms of appealing to jam-band enthusiasts — well, what demographic can better relate to a song like "Stoned and Starving"?"

KC rockers Lazy and Houston's Young Mammals round out this solid mid-week bill. The Facebook event page is here. 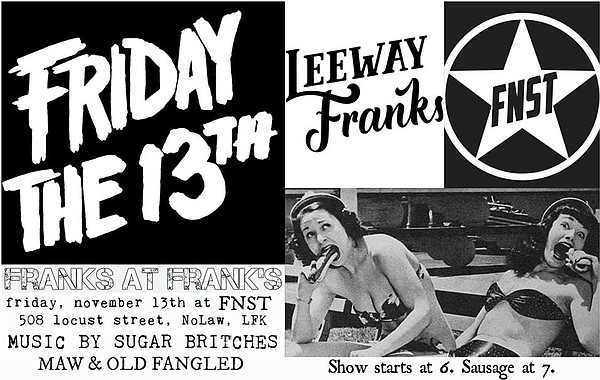 Yes, the sausage-slingers of Leeway Franks will ply their trade north of the river at this shindig at Frank's North Star. Two of the event's three bands (MAW and Sugar Britches) are made up solely of ladies, so there's much more to the evening than just a sausage-fest. (Expect some similar jokes from the ever-raunchy Britches throughout the evening).

The Facebook event page is here, and we think every person named Frank in town should attend, because a bar full of Franks eating franks at Frank's would be so awesome!

[Odd coincidence: If you stop by the Replay on the night before this event, you can sample the bar's new wieners from Cosmic Dogs while listening to a musical showcase from Wiener Records featuring our pals from Schwervon! and other cool bands. Sadly, no one thought to market this event in any kind of clever way]. 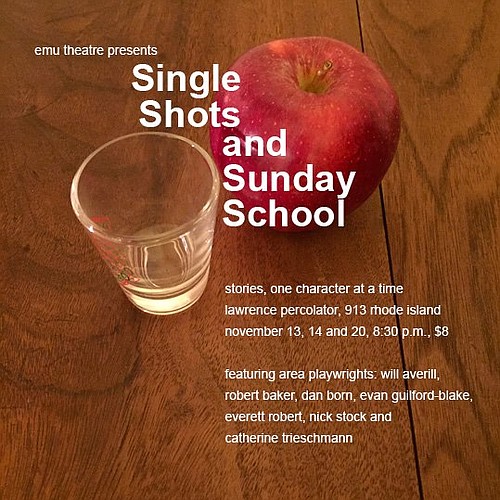 It's a good weekend for theater in Lawrence. KU University Theatre opens Ibsen's classic "A Doll's House" and EMU Theatre returns from hiding (or at least we haven't noticed them lately) with this intriguing series of one-acts at the Percolator.

The Facebook event page bills the event as "the stories of people, one character at a time, as written by some of our best area playwrights." These include off-Broadway playwright Catherine Trieschmann and LFK rapscallion Will Averill.

Our research indicates that one of the plays deals with William Quantrill and another consists of William Burroughs' wife recounting the story of her life leading up to her husband shooting her in the head in Mexico City. This may not sound like a lighthearted affair, but we suspect that many of the plays are actually chock-full of dark humor.

Poetry of Andrea Gibson, doors at 8 p.m., show at 9 p.m. Sunday at Bottleneck

It's a major Sunday for poetry fans. One can attend the Taproom Poetry Series at 5 p.m. then head over to the Bottleneck to experience the acclaimed spoken-word poet Andrea Gibson, the first winner of the Women's World Poetry Slam.

Gibson is touring in support of her new collection, "Pansy." Find more details at her official website here.