Halloween may be over, but costumes and cosplay are all over this week's installment, which includes an annual comedy treat, a burlesque "hexstravaganza," and a screening of a sci-fi/comedy cult classic. All that and ASSJAMZ too.

Heartless Bastards/Slothrust/Katy Guillen and the Girls, doors at 8 p.m., show at 9 p.m. Thursday at Bottleneck,

We're always in favor of kicking off the weekend with a real Thursday barnburner, and Thursday night's triple-bill of acclaimed female-fronted bands at the Bottleneck looks like a winner.

Heartless Bastards' frontwoman Erika Wennerstrom belts out the band's roots-rock raucousness with a power you won't soon forget, and Kansas City opener Katy Guillen and the Girls have a growing reputation as one of the region's grittiest blues-tinged rock acts. The big surprise for local audiences this evening, however, may be the band sandwiched in between: Boston's Slothrust.

Impose Magazine offers this memorable assessment of Slothrust's 2014 album "Of Course You Do":

"Combining Leah Wellbaum's slurring malaise with her punchy, post-grunge guitar, everything about Slothrust's sound feels both earnest and cathartic, like a heart that pumps raw after a winter run."

Prepare to feel a bit raw yourself on Friday morning after this show. 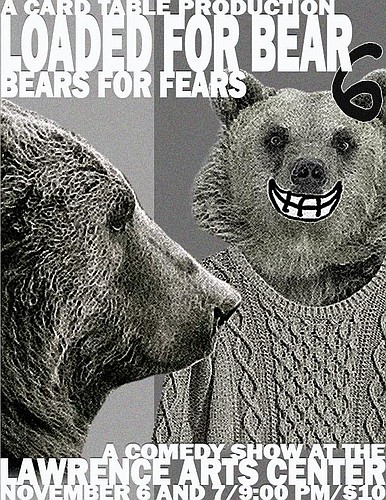 The Loaded for Bear sketch comedy show at the LAC has been a reliable source of big laughs for the last few Novembers, and the annual treat returns again for two shows this weekend in the downstairs Black Box Theater.

Loaded for Bear has been admirably ambitious and absurd in its humor these past few years (more akin to, say, "Mr. Show" than SNL). You'll recognize a few familiar faces from LFK's late, great Victor Continental show on stage, but the Loaded for Bear gang has traditionally been less reliant on local humor than Victor's antics, as well as less-reliant on the low-brow crudeness of most stand-up comedy (though it's certainly safe to expect some local humor and low-brow crudeness).

Cast member Andy Morton tells us that the writing process for this year's eight-member production began during a weird Branson getaway way back in April and offers this view of what to expect:

"This year's show will run the gamut from standard fare like sex education and office food days to tackling more sensitive subjects such as gender and race. From the basic structure and setup of normal sketches to the absurd and downright surreal, there's a little something for everybody. But when it gets weird, it gets really weird."

Look for new cast member Sarah Matthews (you may remember her from such bars as Frank's North Star) to steal a few scenes.

The event has two different Facebook pages: one for Friday and one for Saturday. Order tickets online here via the Arts Center or stop by the box office at 940 New Hampshire St. 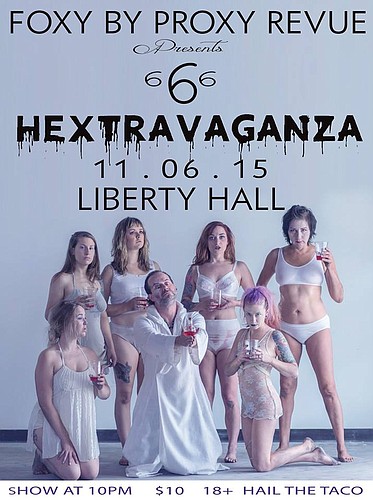 We often covered (or uncovered) the local burlesque scene on our older, raunchier blog, but this may be Foxy by Proxy's first major appearance in the PG-confines of this column.

The local troupe will celebrates six years of wiggling their way around Lawrence clubs with a huge bash at Liberty Hall, and they promise that "dances, hilarity, sexual gyrations, and surprises abound."

The troupe invites the audience to "bare witness" to their "occult secrets" on this special evening. "Bare witness!" Get it? Because they are very scantily clad! This whole "Hexstravaganza" seems like a good way of extending your Halloween fun by one more weekend. 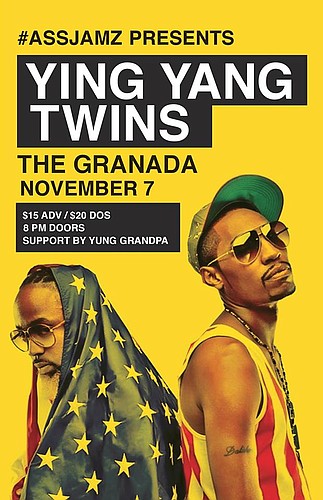 If you're young and want to dance (neither applies to us, obviously), there's little doubt about your Saturday night destination. The newest installment of ASSJAMZ brings a touring headliner to the stage: Atlanta-based duo Ying Yang Twins.

With song titles like "Salt Shaker" and "Shake" and "Jigglin," it seems safe to assume that asses will certainly shake (and jiggle and jam).

The Facebook event page stresses (in all-caps, as usual) the duo's appropriateness for this event: "WE FEEL LUCKY TO BE BRINGING TWO PEOPLE TO #ASSJAMZ WHO TRULY UNDERSTAND THE BEAUTY OF THE BOOTY." 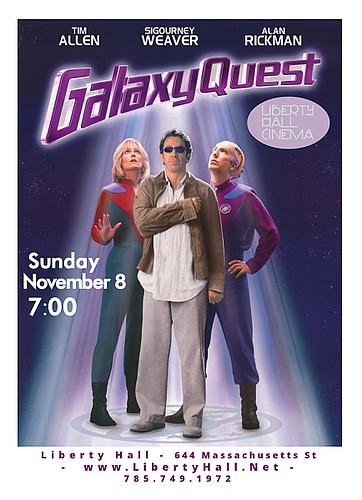 It seems odd to champion a film starring Tim Allen as a real gem, but it's certainly true in the case of 1999's very funny sci-fi comedy "Galaxy Quest." The clever premise involves the cast of a once-popular sci-fi series whose fantasy becomes reality as they are pressed into a world of intergalactic shenanigans.

Do you doubt the film's true cult status? Don't. Our friends in The Noise FM are such "Galaxy Quest" nerds that they recently started a podcast ("By Grabthar's Hammer... What a Podcast") devoted ENTIRELY to the film. Check out episode 3, "What a SEXtraterrestrial," in which the Noise Boys "discuss the grotesquely romantic relationship between Tech Sgt. Chen and Thermian Laliari."

We're hoping for a few fans in costume at the screening. The Liberty Hall website has further info.