Posts tagged with Ashes To Immortality

Posted by Larryville Life on December 2, 2015 at midnight

Thanksgiving is over, which means that (by today's cultural standards) it's pretty much Christmas. Expect to see a holiday event or two popping up in most of this month's columns along with the usual array of music, movies, art and theater.

Most shows at the Jackpot fly under our radar these days, but occasionally we spot a worthy show popping up there. Wednesday's Baroness gig certainly qualifies.

The highly-acclaimed Southern sludge/metal/rock band rolls into town in advance of a new album called "Purple," which drops on Dec. 18 (add it to your collection alongside the band's other albums, which are titled "Yellow and Black," "Blue" and "Red," all of which received very-high 8.5 or 8.4 ratings from Pitchfork).

Baroness got a lot of press in 2012 following a terrifying bus accident in England, which resulted in a few members leaving the group. However, singer John Baizley vowed in Spin magazine that "Baroness doesn’t stop because we got hurt on the way to work." Looks like he's true to his word. Head to the Jackpot and celebrate their return to Lawrence.

Numerous shows are listed as sold out on the band's tour date page, but we're guessing you'll be just fine at the Jackpot. 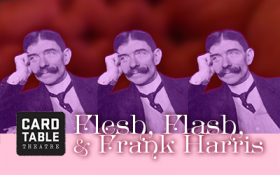 Prepare yourself for a sentence full of acronyms. LPL has teamed with Card Table Theatre and LFK theater legend Paul Stephen Lim (PSL), the founder of EAT (English Alternative Theater), for a series of one-act plays. Thursday's play is the second in the series, and it looks particularly intriguing.

Written by Lim, "Flesh, Flash, and Frank Harris" follows the infamous writer and editor from his student days through his friendships with theater luminaries Oscar Wilde and George Bernard Shaw. Harris' autobiography, "My Life and Loves," was banned as pornography in both England and the U.S.

Lim's play has an interesting backstory of its own: first performed in 1980 at the old Lawrence Community Theater downtown, it went on to have a successful Off-Broadway run.

Every year on the day after Thanksgiving, jolly old Saint Nick finds himself stuck on top of Weaver's Department Store at Ninth and Mass. for reasons we've never exactly understood. Is there a mythology behind this tradition? Did he wreck the sleigh? Is he drunk and suicidal? We simply don't know. But every year the fire department shows up and helps him down their ladder to greet the good little boys and girls of LFK.

But this year it... didn't happen. Mother Nature, with her terrifying "wintry mix," led to a cancellation and rescheduling to prevent the fat man from sliding off the roof and traumatizing several future generations of Lawrencians. We're guessing Friday will be more successful, as warm temperatures are predicted. But, let's be honest, there's always a surprising element of danger to this weird event. Have any Santas ever perished? We'll consult the archives. 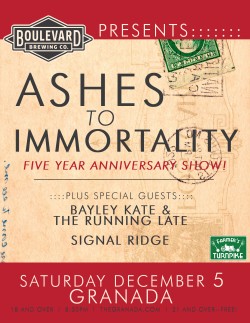 It's the five-year anniversary of the raucous, many-membered bluegrass/Americana outfit Ashes to Immortality, and they'll be celebrating with a Boulevard-sponsored bash Saturday that's free for those 21 and older. We'll assume the Boulevard beer is not free!

Joining forces for the evening will be the great voice of Bayley Kate (with her band The Running Late) and LFK pickers and grinners Signal Ridge. The Facebook event page is here.

Free shows are always a winner for us (especially during the pricey holiday season!). In fact, we've already got our eyes on a free Free State-sponsored holiday show from the funk-masters of the Phantastics coming up on Dec. 19. 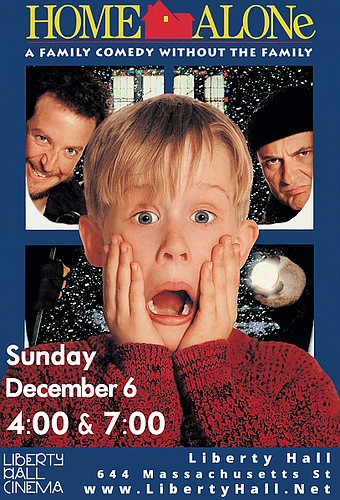 Liberty Hall is giving the people what they want this holiday season: screenings of classic Christmas comedies.

The series kicks off with "Home Alone," and it's a safe bet that the theater will be full of raucous kids, perhaps especially at this matinee screening. Let's hope there aren't too many re-enactments of the film's wild slapstick which, in real life, would only result in emergency room visits. Best to just stick to safe Macaulay Culkin imitations.

Visit the Liberty Hall website for more info and mark your calendars as well for "Scrooged" (Dec.13) and "A Christmas Story" (Dec. 20).