This weekend isn't as festival-heavy as the previous two, but we still have one major festival to showcase, along with two major rock shows (one of them from Major Games!). Also on tap: a music conference, an unusual theatrical event, and an edgy Sunday afternoon of poetry. 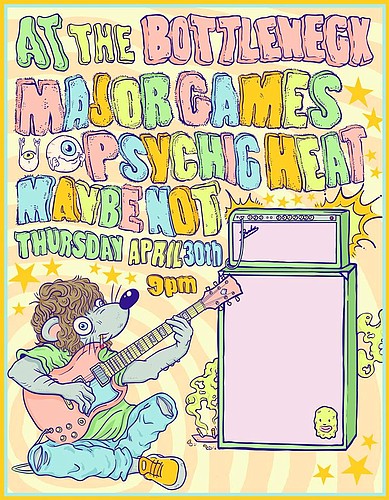 If you're in the know on the local music scene, you've probably already heard Major Games long-awaited new album, which is unsurprisingly dense and intense (we're currently digging the track "Prism"). As a live band, they're well-known for moments that will melt faces clean off, Raiders of the Lost Ark-style. Be prepared for a full-on musical onslaught at the Bottleneck tonight from one of LFK's best (and occasionally loudest) bands.

The openers for this official album release bash are Maybe Not (fresh off their 3rd place finish at Farmer's Ball) and the mighty Psychic Heat. It's the rock show of the week, folks. You may want to call in sick on Friday. 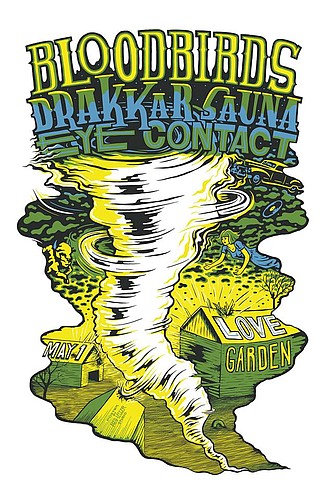 This show is so cool it needs absolutely no description on the Facebook event page apart from "jam times." The fact that 125 people are currently listed as attending should tell you that this is the place to be on May Day.

Bloodbirds' Facebook page suggests that this gig (along with a KC show next weekend) will likely be the last for a long while, so don't miss this beloved psych-rock trio (featuring former Ad Astra Per Aspera members Mike and Brooke Tuley) as they "jam" with beloved locals Drakkar Sauna and up-and-comers Eye Candy (a band also described on the event page as "ex-Ad Astra Per Aspera").

Are you in a struggling band and wish that YOU had a major album release party on the horizon? Consider attending this second annual event designed to offer musicians insight into recording and promoting and other facets of the industry. The afternoon is devoted to panels and workshops focusing on issues of "audience development" and "music industry mechanics" and the evening gives way to a major slate of well-regarded local bands such as Westerners and Pink Royal.

Visit the Facebook event page here and the official website here for full schedules of panels and bands and other necessary info.

Last year's inaugural Food Truck Fest in East Lawrence was a raging success in terms of attendance but, we're gonna level with you here: It was also a bit of a frustrating mess after a certain point in the evening, with the bigger-than-expected crowds often waiting in line more than an hour for food truck fare. However, the organizers are insisting that this year's festival has more space, more trucks, and more volunteers ready to make this into the great event it can and should be. Let's hope so...especially since 1500 people are currently listed on Facebook as attending.

Among the new participants this year are LFK's very popular purveyors of creme brulee, Torched Goodness and KC's Bochi Truck, serving up "The only real boneless wing in town." Paper Buffalo will be on hand to play some tunes and this year's Fest will also feature buskers (it's hard to escape them these days).

We love showcasing unusual theatrical events, and it doesn't get much more unusual than this staging of David Mamet's "The Shawl" by Orange Mouse Theatricals at Aimee's Coffeehouse.

A variety of ticket prices will earn you everything from drinks to food to a tarot reading to accompany Mamet's "biting exploration of trust, greed and betrayal, and the power of spiritual knowledge in a secular world" (Mark Shenton, Playbill).

Visit the Facebook event page here to learn more about this "immersive event." 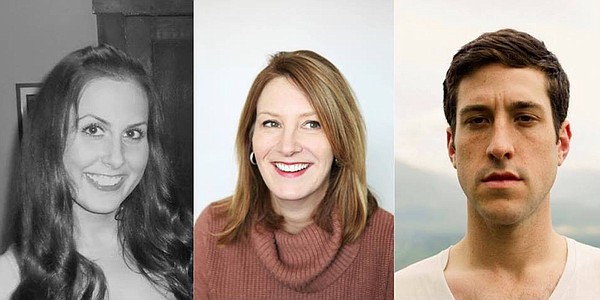 We had an absolute blast listening to the great Southern poet Tim Earley read at the last installment of this series, and we have it on good authority that this month's event (the last before a summer break) is another don't-miss lineup of great poets.

For those who fear an evening of polite verse, think again. One of the evening's featured poets, Jennifer Knox, is as funny and filthy as LFK's own "smutty metaphor queen" Patricia Lockwood. Her work has been featured in the New Yorker and, even hipper, McSweeney's. Read Knox's poem "Chicken Bucket" via this blog and, if you're still bold enough, come and listen to her along with Meg Johnson and Rich Smith on Sunday.

Visit the Facebook event page here for more details and to read the impressive bios of each of the readers.

Tweet us @LarryvilleLife with future tips or angry rants.