Walmart at midnight on Black Friday is no joke.

I wandered over to the shopping center, 3300 Iowa St., a few minutes before Thanksgiving officially ended. I had read some ads noting deals for $1.96 movies, good discounts on heated blankets and other various midnight bargains. I was confident I'd be able to find everything that had interested me. I ended up leaving with only one item thanks to some rookie mistakes.

I completely underestimated how many people had the same idea I did. The parking lot was packed and I'm pretty sure I ended up being closer to the Target across the street when I finally got out of my car. I was also a little shocked when I entered the building. It felt more like noon on a Wednesday before a new KU semester than midnight on a Friday.

The normal walking lanes were divided in two, with major sale items lining the space between. People generally followed established shop-walking patterns, though I did witness a shorter woman almost become the victim of a mauling by cart. No apology was issued, what I assumed was just the nature of the Black Friday beast.

I reached the movie section at 12:04 a.m. Everything I wanted was already gone. It hadn't even been on sale for five minutes and I was out of luck. Feeling defeated with my one item — many around me had carts full of toys, TVs, movies, towels, etc. — I tried to make my way back to the check out lanes at the front of the store. Instead, I was herded along with the rest of the shoppers on a predetermined path. The number of people around me made it hard to go anywhere but where they were going. I'm not a claustrophobic person, but I was beginning to feel a little uncomfortable. I managed to break away from the crowd and walked easily through the kids clothing section, seemingly not a holiday shopping hot spot.

Another thing I noticed while I was there was that people were already claiming items that weren't going on sale for another five hours. Hot-ticket items, mostly in electronics, were being guarded by dedicated consumers. I couldn't imagine holding something for that long just to be able to buy it later, but to each their own.

The one part that did go smoothly was the check out. The process was quick and painless.

If I learned anything from the experience it's that I'm not really cut out for Black Friday shopping.

8:51 a.m. update by Joe Preiner
Chief photographer Mike Yoder was out and about during the morning shenanigans. Shoppers were bundled up to fight the cold as they waited in various lines. The man at the front of the Best Buy line had been waiting there since about 6:30 p.m. Thursday.

7:41 a.m. update by Joe Preiner
While the shopping continues at some of the larger stores around Lawrence, the scene downtown has yet to pick up. Here are a few photos of the local consumer scene from a little earlier this morning. 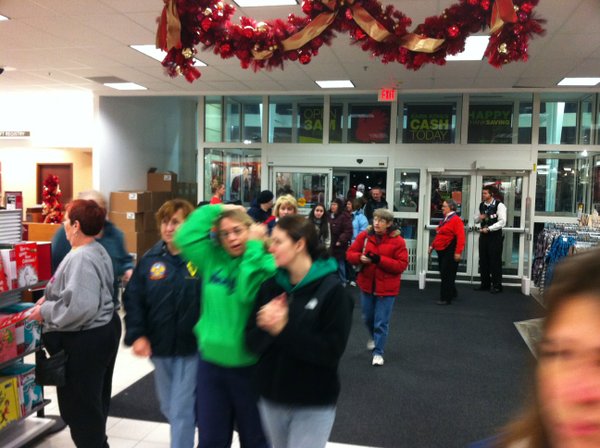 Local consumers head inside Kohl's at 3 a.m. to catch early deals on Black Friday. Many area stores opened early for what is considered to be the year's biggest shopping day. by Mike Yoder 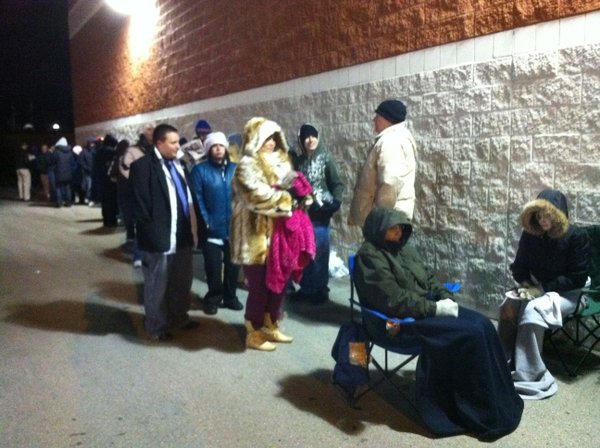 Anxious shoppers wait outside Best Buy in Lawrence hoping to score some deals early on Black Friday. by Mike Yoder

7:02 a.m. update by Joe Preiner
Here's an update on how busy some of the go-to shopping destinations are currently:

The local residents from today's Man on the Street question didn't think they'd be getting out for Black Friday deal finding. Did you make it out this morning?

6:33 a.m. update by Joe Preiner
Reporter Shaun Hittle caught some of the morning craziness today at a few area stores. Check out these videos for an idea of what crowds were like.

3:42 a.m. update by Shaun Hittle
Temperatures continue to fall into the low 20s, but some shoppers got to warm up at Kohl's, which opened its doors at 3 a.m. A block away, about 100 people remain lined up at Best Buy, set to open at 5 a.m.

While the Kohl's shoppers get the early prize for crazy entrance, nobody's got anything on the resilient Best Buy crowd. Shoppers report waiting in line since 7 p.m. Thanksgiving Day. 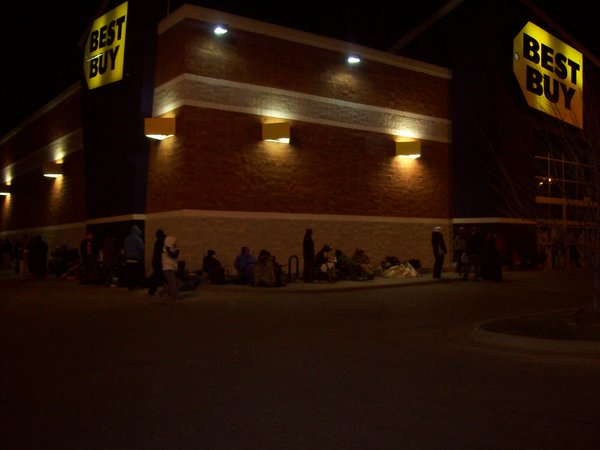 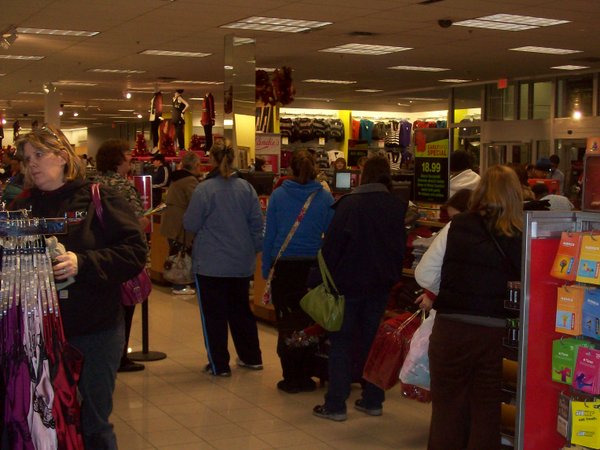 2:00 a.m. update by Shaun Hittle
The trend for holiday shopping in 2009 was denimn, but this year the National Retail Federation says consumers are looking for bling.

Gift cards and clothing are still among the most-requested presents for 2010, but jewelry is a more luxurious trend we haven't seen in recent years due to the economy.

LJWorld.com reporter Christine Metz spoke with local jewelers about what they expect this holiday season. 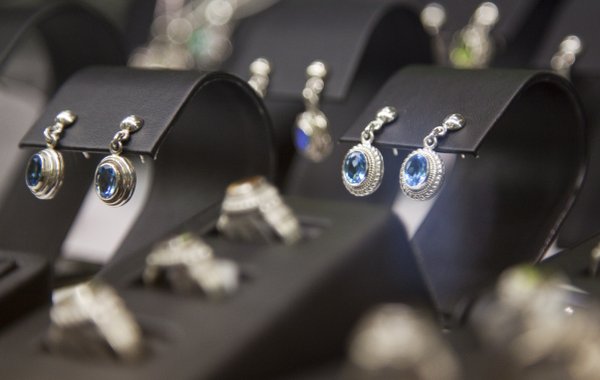 A selection of earrings and rings sits in the display case at Kizer Cummings Jewelers, 833 Mass. on Tuesday, Nov. 23, 2010. by Kevin Anderson

1:10 a.m. Update by Shaun Hittle
Leah Coons, 14, waited in line at Old Navy for more than an hour in order to cash in on Old Navy's giveaway of the X-Box "Connect" dance game. Coons explained that all you have to do is spend $25 to get the game, which is "really easy to do." Later, in a hushed tone, Leah reports that only the first 30 shoppers can get a wristband for the game. Luckily, she's about 6th in line.

After she spends her $25 and gets her game, she headed to bed.

Worth the cold by Shaun Hittle

12:35 a.m. Update by Shaun Hittle
More than 100 eager Black Friday shoppers waited outside Old Navy awaiting the store's midnight opening. Some of the deals found included two for $5 fleece gloves, hat, or scarves. And of course, this boy's vest: 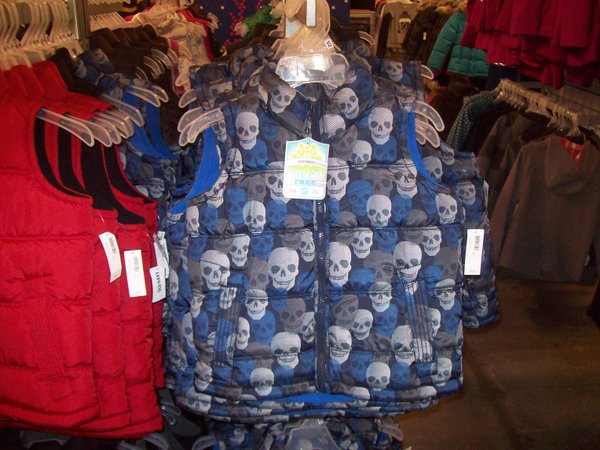 Here's a look at the crowd filing in: 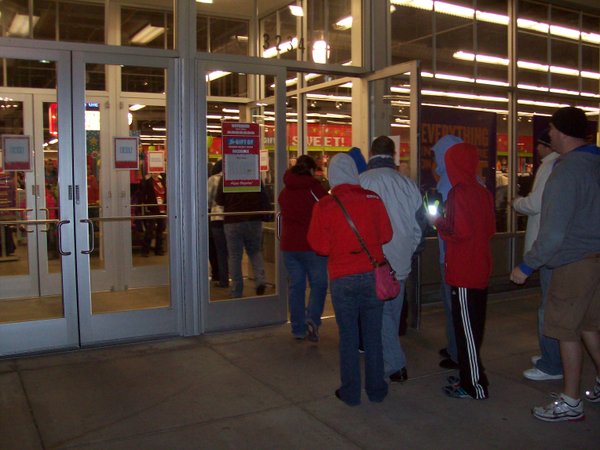 12 a.m. Update by Whitney Mathews
This morning, stores across Lawrence will open early and offer some of their best deals of the year for holiday shoppers. We'll be bringing you periodic updates on Black Friday deals, news and crowds in town.

Many stores will open before dawn on Black Friday. Here’s a list of some area stores that will welcome early shoppers.

Are you shopping today? Take our poll and tell us how much you plan to spend.