Lawrence-based band Truckstop Honeymoon was a couple of songs into their show at the Brick, a small venue in Kansas City, on Friday when stand-up bass player Katie Euliss said the band would answer any questions the crowd had.A lively young woman near the back shouted, “What’s your favorite food?” ...

Bluffs Run Greyhound Park, Council Bluffs, Iowa—Quiet and smoky. Mostly old men staring silently side-by-side at the simulcast screens. Someone was shouting out, “Come on six, hold it, hold it!” Exactly two weeks earlier, in the sixth race, dogs one through eight finished first through eighth, in order. A “perfect ...

What the Oracle Said

In light of the economic crisis, the Breaking News staff turned to the Oracle of the Caves and the Hills. This is what the priestess said, transposed from the notes:**A relatively famous man once or twice said, perhaps he said it on three occasions, perhaps it was a woman who ...

Breaking News on the Campaign Trail

Sen. Joe Biden rally. William Jewell College. Liberty, Mo. Thursday.A young man named John ascended the podium. He had graduated from law school and landed his dream job, he said. Then he had quit his dream job to work for the Obama campaign. The people cheered. An energetic, middle-aged white ...

_The service of the Christian religion and my own faith in essential Christianity would not be diminished one iota if it should in some way be discovered that no such individual as Jesus existed._ - Nobel Prize-winning physicist Robert A. Millikan_Best Choice Soymilk only uses specially selected Organic beans which ...

_None are more hopelessly enslaved than those who falsely believe they are free._ - Goethe_This card is the property of Dillons. Use of this card is subject to Dillons' current policies and such privileges may be restricted at any time._ - back of Dillons Plus cardThe Thai House got a ...

_The higher we rise, the more isolated we become; all elevations are cold._ - French writer Stanislas de BoufflersA tipped-over barbecue grill rusted in a weedy front yard on the 900 block of Connecticut Street. The day was sunny, cloudless and warm.One block north is a house well known for ...

_The man who lives only by hope will die with despair._ - Italian proverbThe locusts were loud in the woods surrounding Roanoke Park in midtown Kansas City, 35 miles as the crow flies northeast of Lawrence's City Hall. Roanoke Park is a midsized park with a sand volleyball court, a ...

_Reader, Breaking News is now a blog! Oh boy! In the past it was published in the [Deadwood Edition][1] with great fanfare. Then it was gone for a while. Now it's here. To familiarize yourself if you are unfamiliar, check out some old editions [here][2] and [here][3] and [here][4] and ... 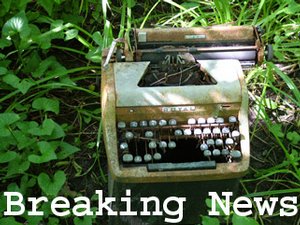