Kansas City filmmaker Kevin McKinney's documentary "Corporate FM" won over moviegoers who caught the film at the Lawrence Arts Center in May. The film explores the corporate takeover of local radio stations that began with the Telecommunications Act of 1996, and led to the homogenization of local radio.

McKinney, a KU grad, uses the example of KLZR, the erstwhile Lazer (now KISS FM), as a poster child for all that's wrong with Big Radio. Interviews with former owner Hank Booth (who expresses remorse for selling that station), former DJs and folks embedded in the bustling Lawrence music scene of the 1990s create a somber scene.

McKinney argues that the lack of diverse, locally owned radio stations leads to cracks in the community (for instance, a syndicated radio show out of Miami can't tell you about a fundraising drive for a cancer-stricken child or that traffic on I-70 is backed up.). The film takes the stance that the plight of local radio represents everything that's wrong with the corporate influence on government and society. Basically, it's all about money.

So McKinney is taking another shot at a Kickstarter campaign to get the film in more independent theaters and college campuses (college kids listen to radio, right?). In June, McKinney tried to raise $20,000 for distribution costs, but that proved impossible. Now he's back with a smaller goal of $7,200.

‘Corporate FM’ filmmaker, who documented the fall of The Lazer, seeks distribution funding

It seems like everyone and their brother has a Kickstarter campaign, seeking funding for projects that are personally and professionally important. That's not meant to diminish the hard work and passion artists, musicians and others have for their projects, but the novelty of Kickstarter has worn off a bit, a least for media.

But if you've tried to tune into local radio recently (in the last 12 years or so), you may have noticed that there are lot of similar formats and playlists out there. Perhaps you've wondered where your favorite DJs have gone. Where is that local flavor? 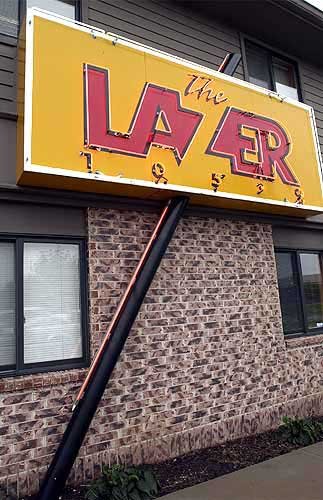 Filmmaker Kevin McKinney, a KU graduate and a Kansas City resident, asked those very questions in his documentary "Corporate FM," which details how federal legislation - the Telecommunications Act of 1996 - allowed corporations to sweep in and gobble up local radio stations. In Kansas City, two companies, Entercom and Cumulus, own 14 stations. In Topeka, Cumulus owns six stations.

This means, according to McKinney, that there's no need for competition. Why would a conglomerate want to compete against itself? So, he postulates, they take the easy route, bundling advertising, recycling playlists, syndicating programs, laying off local personalities.

McKinney, whose film played at last month's Free State Film Festival at the Lawrence Arts Center, spent eight years making the documentary. Much of it focuses on the demise of The Lazer, the cutting-edge rock station in Lawrence that was sold by the Booth Family to the Zimmer Radio Group in 1998. It changed formats several times, and now can be heard as KISS-FM, playing top 40 hits on the 105.9 frequency.

So what about Kickstarter? McKinney is seeking $30,000 in funding to distribute the film and spread the word about why local radio sucks. And he's got one day left to do it.

So far, he's secured less than $5,000, 33 hours to go. With Kickstarter, it's an all or nothing deal: If he doesn't reach the $30k goal, he gets no money and the folks who have pledged their support get their money back.