It wouldn’t be the holidays without Tchaikovsky’s immortal classic, “The Nutcracker” ballet. Sugar plum fairies and cute, little girls as snowflakes are an annual part of the December tapestry.

But if you know Ric Averill, the creative director for the performing arts at the Lawrence Arts Center, you know he doesn’t like to do anything traditionally. He’s constantly looking to innovate, and, thus, it can be no surprise that “The Nutcracker” has not escaped his vision. 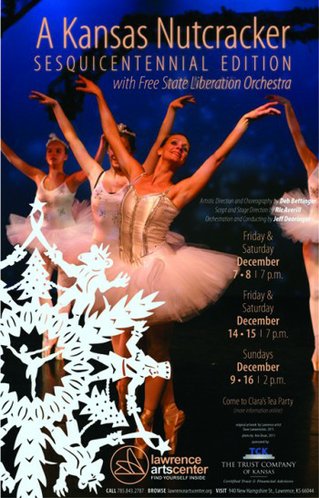 Averill has been presenting “A Kansas Nutcracker” off and on since 2002, alternating it with another holiday production, “The Snow Queen.” Prior renditions have set the story in 1856, at the height of the free-state battle in Kansas. To kick off the sesquicentennial celebration of Quantrill’s 1863 raid of Lawrence, Averill has updated his “Nutcracker” to take place at Christmastime 1861.

The Civil War has been raging for eight months. Abolitionists in Lawrence are coming around to the opinion that this conflict may last longer than was previously thought. A dark mood hangs over the holiday.

Averill marries the original characters from the 1816 fairy tale with historical Kansas personages. Clara, the young woman from the original story, is staying with Godfather Drosselmeier in Lawrence, while her father, Dr. Stahlbaum, is away in Washington setting up hospitals for the war. She receives a nutcracker as a Christmas gift from her godfather at a party he hosts.

But Drosselmeier invites Kansas’ first governor, Charles Robinson — a staunch free-stater — and Senator James Lane to his party. Lane is an opportunist and a general in the Kansas Militia.

“They hated each other,” Averill says of Robinson and Lane. “And when you have opposed guests at a party, trouble ensues.”

The jibes between the two spark a debate covering the politics of the time — the war, slavery and temperance — and Clara is fascinated by the discussion ... and by her godfather’s handsome nephew Kurt, who will soon go off to war.

“Instead of a handsome prince, like in Tchaikovsky,” Averill says, “Kurt takes the place of the nutcracker in Clara’s dream.”

And thus, instead of a fantasy about a candy paradise invaded by mice, Clara dreams of 1861 Kansas, and a struggle by the handsome Kurt to lead contraband slaves held by Lane along the Underground Railroad to freedom farther north.

But if that doesn’t sound quite like the usual holiday fare, don’t worry. “A Kansas Nutcracker” doesn’t forget its origins. This is still Tchaikovsky’s most beloved work.

“The snowflakes and the flowers are done in traditional balletic manner,” Averill says.

The Arts Center’s professional dance troupe performs much of the ballet, although the scope of the production calls for amateurs as well. And, of course, this is “The Nutcracker.” There will be little girls dancing as snowflakes.

“There are around 150 people involved in this production,” Averill says, “including 15 backstage workers and a 12-piece orchestra that includes a harp and a mandolin trio.”

And so, a familiar tale will once again come alive in a whole new way. Not only is “The Nutcracker” on again in Lawrence, it will have Averill’s Kansas flavor once more.

This is also an outstanding article. I wish I could be there for the performances.

Ric Averill, thanks for adding this material to the Nutcracker!

Show the picture gallery on the front page, plus comments. It's great photography and will interest many people!