“Of all ideals they hail as good,” American satirist Tom Lehrer wrote in his typically irreverent ode “Oedipus Rex”, “The most sublime is Motherhood.”

Julie Dunlap and Sara Stotts seem to have their tongues planted similarly in cheek with the debut of their show “Mother%$!#hood,” which gets a staged reading at the Lawrence Arts Center on Friday night. 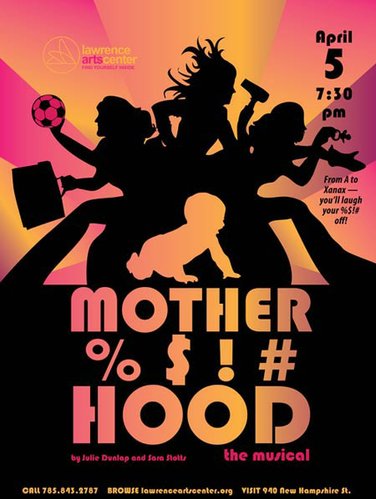 The show tells the story of three women who meet at their gynecologist’s office while pregnant. One is a first-time mom, who is looking forward to everything. Another is a Type-A mom who has her children’s ages and lives planned to exact schedule. The third is a woman with children in junior high who has become unexpectedly pregnant.

“She thought she was done with all this, but whoops!” Dunlap says.

Each is a different person experiencing motherhood differently, but they share common experiences. The songs tell their stories and describe problems, but they are also designed to elicit laughter.

“There’s the song about when Mom goes on Xanax,” Dunlap says. “There’s the one where she wants to slap the class bully. There’s dealing with teaching a teenager to drive, where 20 mph feels way too fast.”

There’s even a song about prom. One mother has a serious talk with her daughter’s escort before the big night, explaining to him that she will (mess) him up if he tries sleep with her.

“It’s an 18-year journey in 90 minutes featuring everything from the mundane to the extraordinary,” Dunlap says. “We explore every genre of music except rap.”

Dunlap and her college roommate and longtime friend Stotts conceived the show several years ago as an irreverent tribute to women’s trials and triumphs raising children. Dunlap’s kids became involved in theater at the Arts Center, and she came to know Performing Arts Artistic Director Ric Averill as a result.

“Lawrence is the greatest city in the world,” Dunlap says. “I talked to Ric about the show, and he wanted to read it. As we gave him more and more material, he got excited. We went from having a very small reading in the Black Box (Theater) to something much bigger on the Arts Center’s main stage.”

She stresses that Friday night’s performance is still a staged reading. Actors will have scripts in hand, and it’s not a full production.

“There will be plenty of visual surprises for the audience, though,” she says.

The show may be irreverent, but it remains celebratory of women raising children.

“We want women to be able to laugh at themselves and their journey and know they are not alone,” Dunlap says.