As ideas go, a vegetable circus is up there with the silliest of them.

And for Jaimie Carswell and partners, that’s the idea.

“We wanted to come up with the stupidest show possible,” he says affectionately of “Cirque de Legume,” which plays the Lawrence Arts Center Friday night and Saturday afternoon.

Despite the name, it bears no resemblance to the Cirque du Soleil shows made famous in Las Vegas. There are no acrobats, grand sets, or seemingly impossible acts of grace. In fact Carswell’s show is pretty much the opposite. It’s two clowns, who, upon discovering they have an audience, attempt to put together a performance. The result is, well...

“It’s two idiots who put on a circus using only a box of vegetables,” he says. 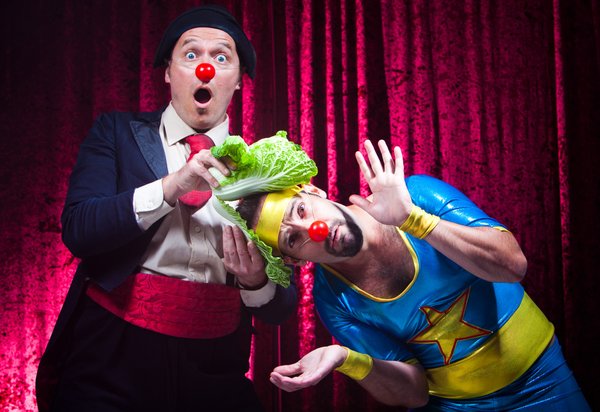 “Cirque de Legume” asks the audience to come along on an imaginative ride.

“We never think twice about vegetables,” Carswell says. “But, if you really look at them, you notice how exotic a vegetable is. They’re bright colors, and they look unusual, and we don’t notice because they’re so everyday.”

And thus, they can become something else. Such as chili peppers becoming the blades in a knife-throwing act.

The emphasis is on physical humor. The vegetables don’t just stand in for other things; they are consumed, over-consumed, and spit. Such as when one clown is playing a horse, and the other is constantly feeding him carrots. He does his best to keep chewing, but he develops a cough, and, well, you can imagine what happens.

Obviously, that type of humor appeals to children, but Carswell says, despite it being an all-ages show, “Cirque de Legume” is not aimed at kids.

“When you see a picture of a clown in a red nose, you think it’s for children,” he says. “But it’s not a children’s show. The children often laugh, because they’re laughing at their parents laughing.”

Kids see the world in imaginative terms, he believes. Adults have to be retrained to see that. “For an adult, it’s funny to see someone using a pepper as a knife,” Carswell says, “but for a child, it’s normal. It’s silly, but it’s normal.”

He sees clowning as a key to making that type of imaginative humor work.

“To make clown humor work,” he says, “you have find something the clown finds beautiful. That thing, whatever it is, then, becomes funny. So we have a circus and vegetables, and the clowns find them beautiful, which makes them funny to everyone else.”

And there’s something else important too, he says: Failure.

“It’s a very specific style of clowning,” he says. “It’s not how good they are; it’s how bad. What they’re trying to do is stupid. A circus with vegetables is stupid. It can’t succeed, but they’re hopeful it will. They keep hoping that each idea they have will work. It really taps into that whole idea of failure and hope.”

Regardless of why it works, “Cirque de Legume” is laugh-out-loud funny. It’s been on tour since 2009, garnering terrific reviews from The New York Times and Associated Press among others.

It might be two idiots trying to put on a circus with a box of vegetables, but where else can you see a hypnotist use a swinging beet to put his subject to sleep?

“Cirque de Legume” runs March 1 and 2 at the Lawrence Arts Center. Curtain is 7:30 p.m. on Friday and 3 p.m. on Saturday. Tickets are available by calling the box office at 785-843-2787 or online at www.lawrenceartscenter.org.