When you have a story featuring monsters, gods and larger-than-life heroes, it’s not an easy thing to put onstage. Ric Averill, the Lawrence Arts Center’s artistic director of performing arts, was not daunted. He got a lot of help.

“We have 45 young actors, 15 community actors, and five professional actors working on this project,” he says of “Escape from the Labyrinth,” his new production that tells the stories of Greek legends Theseus and Icarus.

With only about a month to put it together and the limitations of putting such an epic story onstage, Averill had the cast work together to create both the script and the scenery.

“We’d take a scene from one of the myths,” he explains, “and we’d give it to a small, mixed group of child and adult actors. Then we’d have them go off and improvise how we were going to stage it.”

Each child has a shield and a staff. In the improv sessions, they worked out how to hold them, organize them and move them to create visual effects that would evoke the images required. They would also work out the action and then rehearse how to make it all fit together. 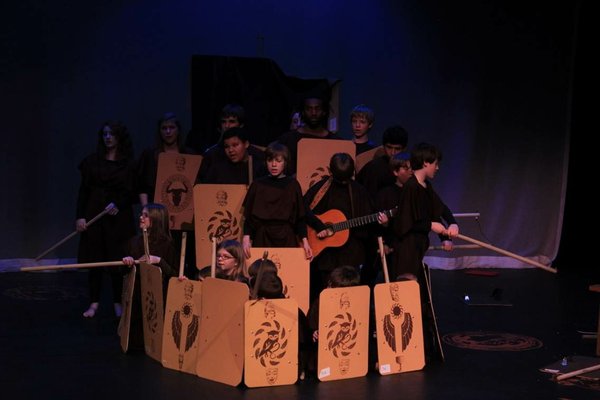 The cast spent three weeks creating their scenes. Then Averill took what they’d done and wrote a script to accommodate it, essentially formalizing the improvised scenes into a cohesive play with lines for the actors to say.

“It was all very tribal,” he says.

The finished product concerns the exploits of two famous sons: Theseus, son of the King Minos, and Icarus, son of the great builder Daedalus. Averill offers a new take on the legends wherein the two grow up together, leave, and then ultimately return to deal with the legacies of their ineffective fathers.

“It’s really an action-adventure story,” he says. “Theseus, of course, has to slay the minotaur, and Icarus uses his father’s wings to fly up to the sun.”

That sort of magic requires a different kind of assistance, and for that Averill turned to puppeteer Spencer Lott.

“We’re using all kinds of puppets,” Averill says. “Spencer’s designed some amazing things. We’ll have shadow puppets for a lot of the monsters, and there is a smaller version of Icarus with the wings on a string that will fly up to the sun and get burned.”

“It’s a five-person puppet,” Averill says. “One person plays its head, and four others play the arms and legs.” 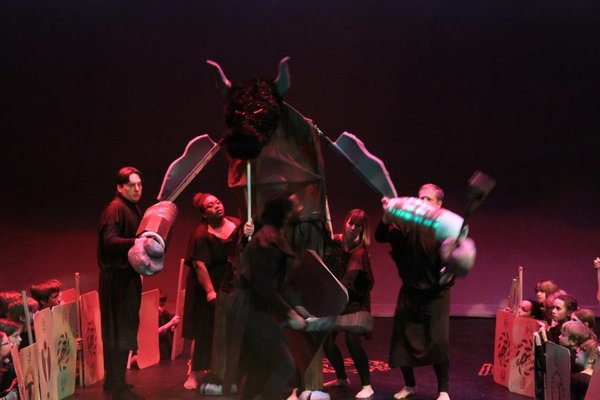 Averill expects the show to have broad appeal.

“Particularly for the middle-school-aged kids,” he says. “The adventure and the spectacle really go over well with that age group.”