'The Addams Family' creeps its way onto Lied Center stage

Say “The Addams Family” and the first thing to pop into your mind is likely the macabre TV show from the 60s. Failing that, it’s probably the two movies from the 90s starring Raul Julia, Anjelica Huston and Christina Ricci based on the show.

Regardless, the music you likely associate with it is the iconic theme song. Whether you know the words or not, you know when to snap your fingers. 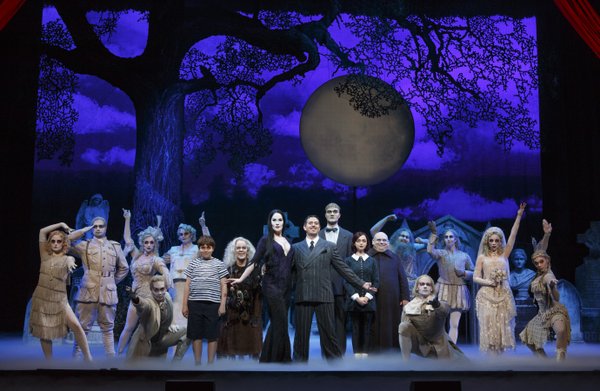 But there is more music than that. A lot more. In 2010, a Broadway musical based on “The Addams Family” premiered and starred Nathan Lane as family patriarch, Gomez, and Bebe Neuwirth as Morticia. It won a Drama Desk Award for outstanding set design and several Broadway.com fan awards, including favorite new musical.

The show ran for two years before closing, and a new tour hits the Lied Center stage Wednesday night.

The TV show was based on a series of single-panel gag comics by Charles Addams. The musical features an original story by Marshall Brickman and Rick Elice (the team behind “Jersey Boys”) based on the comic, rather than on the series or the movies.

Sinister Wednesday Addams is grown up and has fallen in love with a normal boy named Lucas. She confesses that love is changing her from her ghoulish ways, and she has invited Lucas and his family for dinner, charging her macabre relations with being normal for just one night. Naturally, that’s an impossible task for Gomez, Morticia, Uncle Fester and Pugsley to pull off, and, Lucas’ parents have family secrets of their own that further complicate the shenanigans when everyone gets together.