Ask Jennifer Glenn about “The Pirates of Penzance,” and you’ll get an unusual answer.

“Well, there’s absolutely no plot to it,” she says of the classic Gilbert and Sullivan operetta.

The story concerns young Frederic, who has just completed his indentured servitude to a misfit band of pirates. He plans to turn on them and slay them all once he is free. But there’s a complication.

“According to the contract, he’s indentured to the pirates until his 21st birthday,” Glenn explains. “But Frederic was born on February 29, so he only has a birthday every four years. Despite being 21 years old, he’s got to serve for 16 more birthdays.”

Frederic falls in love with Mabel (in the space of a single song, Glenn notes), the daughter of a British major-general. He is torn between his love for Mabel and his duty to the pirates.

The show is anything but dull, though. Like all Gilbert and Sullivan shows, it’s ridiculous and very funny. Between a screwball band of pirates, Keystone Cops, and a major-general with enough daughters to marry to an entire ship of pirates, there’s plenty of hilarity.

The original operetta is approximately two-and-a-half hours long and is almost entirely sung. Neither feature sounds like a good fit with performers ages 8 to 14. The Arts Center selected an adaptation that handles those problems.

“All of the songs are shortened, and some of them are cut,” Glenn says. “And a lot of the songs where plot is given out have been changed to dialogue, so it’s easier to understand. It’s really a great script. It keeps all the humor but makes it accessible to kids performing it and kids in the audience.

“Plus, it only runs an hour, and there’s no intermission.”

If Gilbert and Sullivan are famous for something other than ridiculous, largely plotless musicals, though, it’s wordy songs that require good diction. That can be an issue with kids, too.

“Some of them just weren’t used to having to really pronounce their consonants,” Glenn says. “They’d sing a line, and I’d say, ‘What?’ to let them know they needed to enunciate more. And we’ve just been hitting the consonants every day to get them focused on it.”

Glenn notes there are plenty of highlights. She added a comedy bit with the cops chasing a band of orphans, there is something happening onstage whenever there is music, and the show’s most famous number — “The Very Model of a Modern Major-General” — is captured perfectly by her cast.

“Other than that, it’s bunch of kids doing Gilbert and Sullivan,” she enthuses. “What could be better than that?”

“A Kansas Nutcracker” marries the story of Clara (Estrella Frankenfeld) and her nutcracker prince from the famous Tchaikovsky ballet with those of Kansas’ first governor, Charles Robinson (Jason Van Nice), and its first senator, James Lane (David Sturm).

Set on Christmas Eve 1861, the show begins at a barn in Lawrence at the home of the fictional Godfather Drosselmeier (Ric Averill), a toymaker, whose skill borders on the magical. He’s invited Robinson, Lane, and a host of other guests — some historical, some fictional — to a grand party to celebrate the holiday.

Politics dominate the conversation as Robinson and wife Sarah (Lauren Krause) cast Lane as an opportunist and a closet bigot. He’s captured several escaped slaves and is holding them as “contraband” — a practice legal at the time but frowned on by the Free State abolitionists that populated Lawrence. The Robinsons pressure Lane unsuccessfully to liberate his slaves and then team up with Drosselmeier to help them escape.

In between are presentations of political causes popular in Kansas at the time — abolition, women’s suffrage and temperance. Evidently, no one ever told Drosselmeier and his guests you don’t discuss politics or religion in a party setting.

At the center of the drama is Drosselmeier’s goddaughter Clara, who becomes interested in her godfather’s handsome nephew Kurt (Blair Bracciano).

Despite taking up most of the first act, the play serves as a kind of prologue for the action of the ballet. After her nutcracker is broken by her younger brother during an erratic reenactment of the Battle of Wilson’s Creek, Clara falls asleep and dreams of the strange vistas of Kansas and of the escape of Lane’s slaves.

At this point, the show becomes truly delightful. The familiar Tchaikovsky dances are reinterpreted to present an entirely new landscape — the “Spanish Dance” features prairie crickets; the “Russian Dance” is performed by U.S. Cavalry soldiers. Characters from the play re-emerge in Clara’s dream — Kurt becomes the Nutcracker Prince; Lane is the Mouse King.

The script, written by Averill, is an update of his original 2002 version and is much stronger than previous editions. He gives us a good villain in the opportunistic Lane. Sturm is pompous in the role, clearly having fun strutting around the stage.

Frankenfeld and Bracciano have nice chemistry as the young, would-be couple, and Saskia Ferrara gives a delightful turn as boy-crazy Jeanette, who attempts and fails to win Kurt for herself.

But the show is strongest when the action gives way to the dancing. Deb Bettinger’s choreography is entrancing. She effortlessly mixes professional ballerinas with children performing onstage for the first time. She finds the right mix between beautiful and cute.

Several of the dances were particularly engaging. Clarate Heckler creates one of the highlights of the first act as a wind-up ballerina doll. She’s led on stage, and then Drosselmeier cranks on a giant turnkey to get her going. Heckler moves precisely from position to position with each turn, until she is at last set free to flit around the stage, twirling gracefully while blowing kisses mechanically.

Heckler also shines in the second act, performing a solo ballet with complete composure while young children in cricket costumes hop all around her.

Shelby Steichen is exquisite as the Snow Queen, and Matthew Rodriguez (who doubles as contraband slave John Brooks) is perfect as her Snow King. Supported by a fine cast of adult ballerinas, little girls as snowflakes and a prairie chorus, they bring the first act to a magnificent end.

Adriana Gramly mesmerizes as a snake that poisons the Nutcracker Prince at Wilson’s Creek. Dancing with a long swath of silk to simulate the snake’s undulating body, Gramly weaves her way across stage, stepping over and through the silk and then wrapping and unwrapping herself in it in entrancing fashion.

Steffani Day’s costumes, based on original designs by Jennifer Glenn, are gorgeous. The period pieces are spot-on, perfectly evoking the dress and imagery of Kansas’ first year of statehood. The fantasy costumes from Clara’s dream world are exotic, imaginative and beautiful.

The set is sparse, consisting mainly of drops to provide background to the acting and dancing. But they are magnificently painted. In particular, the prairie landscape is the picture of the Kansas countryside and is well lit by Art Kent.

In all, “A Kansas Nutcracker” charms on nearly every level. A treasury of dance and local history, it takes familiar stories and re-imagines them in invigorating new ways.

Ask Jenifer Harmon about her favorite story from a life in theater, and she gives an interesting answer:

“Gosh, almost every time I do a show it becomes my new favorite story.”

It’s a telling statement for the Lawrence Arts Center’s Staff Production Stage Manager. Harmon is rarely onstage herself. Her job calls for her to make other people look good, garner applause for performers and directors. So all those favorite stories are about other people succeeding.

“The relationships with the performers are my favorite part of a production,” she says. Harmon came to her position in roundabout fashion. The daughter of a Kansas City DJ and a former development director for Kansas Public Radio, the arts are in her blood. In high school, she was a visual artist – drawing, painting, and sculpting. At Kansas University, she studied dance and fell in love with modern style.

But it didn’t come easily to her, and, as many young people do in college, she found something new by chance. As a dance major, she was required to take either a class on costuming or one on lighting. Harmon chose the latter and discovered a destiny for herself. Her interest in the performing arts and her skill in visual arts came together perfectly.

“It felt right making the environment of a show work,” she says. “I really enjoyed that.”

As a stage manager, she gets to do that and more.

“I make sure things go smoothly,” she says of managing a show. “I keep track of all the details of a production and make sure everything comes together the way it should. I love being that element that keeps it all together.”

But she’s not interested in making a new favorite story just for herself. Every time it’s about someone else.

“We’re all part of creating theater,” she says. “It’s extremely gratifying to me when the performers get that applause.” 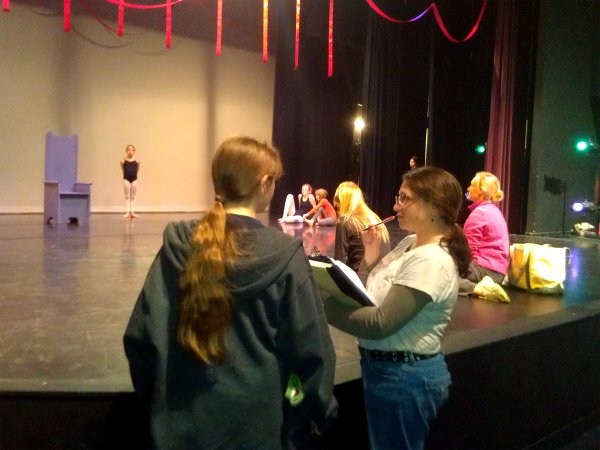 “I’m excited about creating opportunities for kids to get involved in technical theater,” she says. “I love it when kids who act get involved on the tech side. They learn there is more to putting on a great show than just a fine performance.

“I also love when shy kids decide to work backstage on a production and get involved with extroverts like actors. It’s nice when everyone gets to try out the other person’s styles.”

Harmon is a facilitator. She brings different kinds of people together to realize a broad artistic vision.

“There are so many pieces to making a show work,” she says. “There’s the director’s vision for the whole thing, the actor’s view of their roles, the set designer’s vision of what it looks like, and the lighting designer’s ideas for how it’s seen.”

Helping make it all happen is a good story every time. And each one is better than the one before for Harmon. After all, each one is a new favorite story.

A life in theater doesn’t get much better than that.