A big, fat puzzle: School lunch, budgets, calories and our kids — what you can do 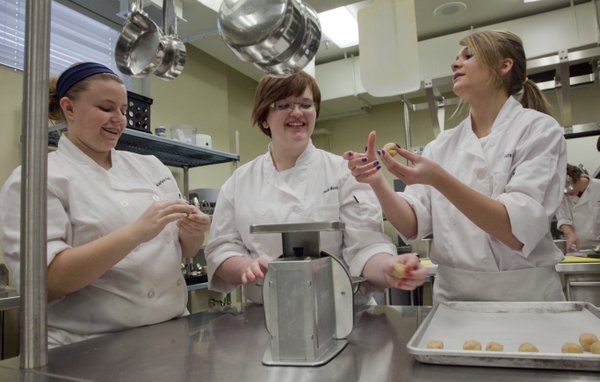 Last week, I wrote a story about the puzzle that is school lunch.

What's so puzzling about lunch?

About eight ways to Sunday, those things DO NOT go together in mass quantities.

In both Lawrence and Eudora alone, thousands of students at all grade levels are eating school-prepared meals daily. Some, for both breakfast and lunch. And, in case you hadn't noticed, funding for schools (and their lunches) is a bit contentious right now in the state of Kansas. So, no more money is probably coming for school lunches right now ... which isn't helping out our school nutritionists at all.

Each week, those charged with making sure school lunches comply nutritionally are also having to factor in not only more strict dietary guidelines, but rising food and labor costs and the sheer reality that kids won't eat everything under the sun. Not to mention, many kids are bringing their lunches to school because either they or their parents aren't too pleased with what's going on their kids' plates.

And, believe me, parents who are upset about school food, the schools hear you — and so does Jamie Oliver. The Lawrence schools trashed their fryers years ago. In Eudora, the only fryers in the entire school system reside in the high school's very cool culinary arts kitchen, where they're used sparingly. Many schools in both towns have school gardens that add to their students' plates through a loophole in the government system. The Lawrence schools even have a pilot program going to see how economically (and practically) viable a local farm-to-school program really is.

So, school lunches are getting there. They're getting healthier, they're getting more attention, they're getting less prepackaged. But it's not perfect and everyone involved knows it — the kids, the parents, the teachers, the administrators. If one thing became clear to me while talking to them about school lunch it's that everyone is trying to improve upon and even end the days of "tater tot casserole." (Yes, that's something that's served.)

As a parent, my first reaction to the idea of my son eating a school lunch wasn't a good one. I still remember being literally the only kid in my class who didn't like the hexagonal mishmash of cheese and hamburger known as "fiestada pizza" in elementary school. But, I also remember fishing quarters out of my dad's change bowl to grab a plate-sized chocolate chip cookie from the a la carte line in middle school. And, sure, my high school had a salad bar, but the only thing I ever got from it was four dinner rolls for a dollar to store in my backpack as pre-track practice fuel.

Um, yeah, I was about as imperfect as school lunch as a kid, and I don't expect my kid, or anyone else's to be any different.

So, what can we do to make the puzzle easier to solve? To make things healthier, more locally sourced and full of good, REAL food?

We can let our kids go through the school lunch line.

This is a hard one for me, because, since motherhood, I always figured I'd be the hippy dippy parent sending my son to school with kale salad and a kombucha chaser. But, in talking with local food advocates, educators and administrators, it became clear to me that this thinking won't do the schools one iota of good.

Rather, the more students who participate in the school lunch program, the more funding the schools will get to improve what goes on their plates. More funding equals more made-from-scratch items, more money to buy locally grown fruits and veggies, and more chances to make improvement.

My son still has a few years to go before he's grabbing a lunch tray five days per week. I'm hoping that by then, the farm-to-school program and school gardens will be in full effect at every Lawrence school and he'll have some much better choices than fiestada pizza or tater tot casserole.

And even if things don't improve quite so rapidly, that's OK, I'll feed him the best I can at home. Because all we can do is the best we can, especially when solving a big, ol' fat puzzle.

Sarah! This is a wonderful article!!!

It is super-complicated. I have long said that pulling our kids from school programs (or pulling them from school altogether) does nothing to help fix the problems.

I'm tempted (if I could afford it - and I can't) to go so far as to home school my kid. But that just ends up equalling some semblance of white flight. I need to be a parent who is participating in the public school - not leaving it alone to go to rack and ruin. My (hopefully good) kid needs to be in that school, leading the way. It will be good for my son.

And this school lunch problem is part of that too. Here's hoping that by the time our boys get to the school lunch part of the show it's much better. If not, hopefully they'll get enough good stuff at home to counteract the lunches. ;)

So glad you agree, Megan;)