The case for gardening, even if Mother Nature doesn’t always agree 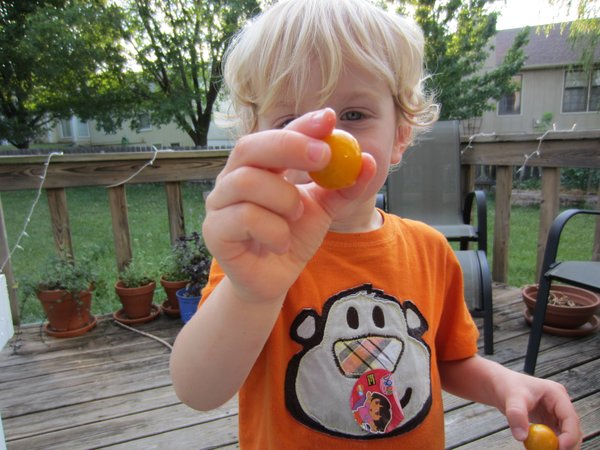 Our cherry tomatoes did great even with the bad weather the past two years. Good thing, too, because they are the only tomatoes the kid will eat. by Sarah Henning

I might not get to celebrate spring break, you know, being old and all, but that doesn’t mean I’m not excited about it.

Not only does it mean the unofficial start of warm weather (hear that, snow!?) and March Madness but also means that spring is here. Or almost here. Or close enough that we can all start thinking about gardening.

For months, I’ve been talking with a part-time farmer friend who is growing several types of kale this year. With each little update on this process (picking seeds, ordering seeds, starting seeds indoors), I’ve gotten more excited about the coming growing season. I’ve had a garden for three years — three raised beds plus a pretty good-sized container garden on my deck — and it’s been fun, though not necessarily highly productive.

If I’m being honest, the last two summers have been a kick in the teeth as a gardener. Plants bolted. The bugs hit. Blossom end rot did in many tomatoes. Poor planning left some plants gasping for nutrients. My blueberries and raspberries were crushed by the heat, as were many of my container herbs — I’ve been able to kill three “unkillable” mint plants every single year (yes, the body count is at nine). Melons have never, ever thrived for me. Oh, and it turns out I hate weeding.

That entire paragraph probably makes you wonder if I have a black thumb or why I’d ever want a garden in the first place, especially since I apparently suck at it.

But here’s the thing: I don’t think I suck at it (the weather had a lot to do with my kill rate) and I actually do find it fun.

There’s something downright enjoyable about being able to go out and harvest what you put into the ground/raised bed/pot. And 100-degree temps, a hatred of weeding and bad luck aren’t going to change that.

Because, here’s the thing: I think it’s incredibly important to get reconnected with where our food comes from. 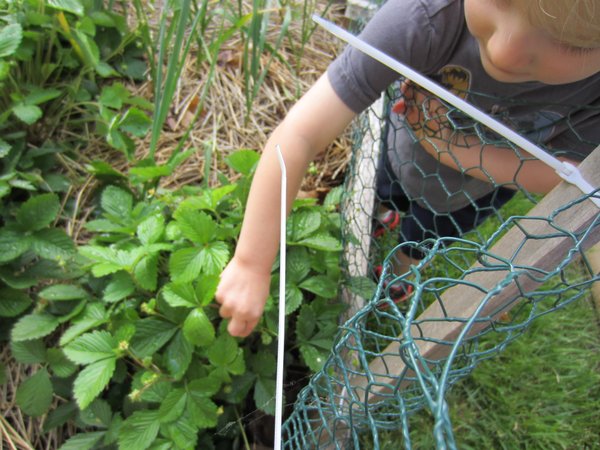 On the hunt for tiny strawberries. by Sarah Henning

Growing up, we had a garden, but I only really remember harvesting tomatoes. And at the time, I don’t think I totally “got” how good a fresh tomato was. It was just a tomato that appeared in our backyard after way too frickin’ long.

In fact, not only do I think I didn’t get it but I also think I didn’t really appreciate that homegrown food at all. It was a novelty, and the big, smooth vegetables sans imperfections from the grocery store seemed more like “actual” food to me.

It’s silly to think about now, but I don’t know how I could’ve been so disconnected. And I don’t want my son to ever feel that out of touch with what he puts in his mouth.

It’s not that my parents didn’t try to interest me in our family garden, it’s more that the food culture was very different back then. We were in the middle of a shift from agricultural awareness to total blindness and back again — at least in my opinion and experience as a child of the ’80s.

Today, we have the advantage of a resurgence in restoring some awareness of our food chain, not only where we buy it from, but where food comes from in general.

And I want to keep that earth-to-table connection as plain as possible in my own kitchen, for my benefit and my family’s.

My son knows more about how foods grow and come to be than I ever did at his age, and I’d like to make sure that knowledge stays with him. Because he helps in the garden, he tends to try new things just because he helped pick them. He doesn’t like everything, but there’s a better chance he’ll try something if he gets to harvest it himself than if he helps me pick it out at the store. 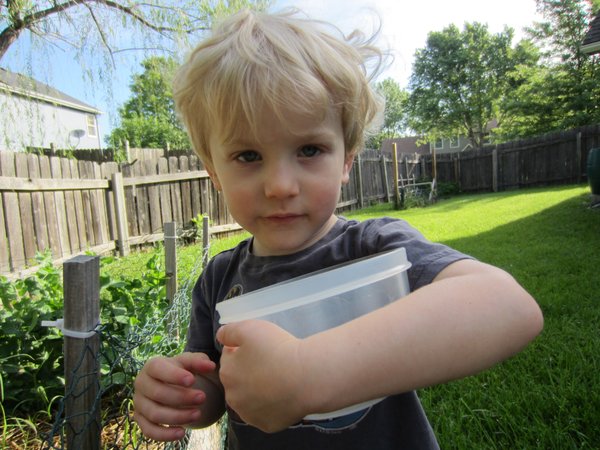 He's got his picking tub and he's not going to let go. by Sarah Henning

So, I’m planning my three-season garden for a fourth straight year. I’ve learned I grow some foods rather well (potatoes, Swiss chard, cherry tomatoes) and some plants rather poorly (see my litany of murdered plants above), but I grow them, and that’s what matters.

My planned plants for spring, summer and fall are as follows. As for which will survive, your guess is as good as mine.

Strawberries (on their third year)

Blackberries (to replace my murdered berries)

And anything else that ends up looking intriguing (which always happens)

Planted Cherokee Purples for the first time my goodness they are good! They also ended up being one of my better producers. Really not known for that but maybe they benefited from the weather conditions where others struggled. Great list Sarah but where are the cucumbers, zucchini and beans? Also, you might try okra. Big producers and there are many ways to use them up. We've never tried beets but since we are avid juicers, I'm going to have to try them this year.

Hi there! I don't typically do cucumbers or zucchini because I've had a horrible squash beetle problem! It's so sad to see them shrivel up and die. But, perhaps, I should try them again. We've also done beans in the past and will probably do them again this year. I've never done okra, but that sounds fun, too, thanks!