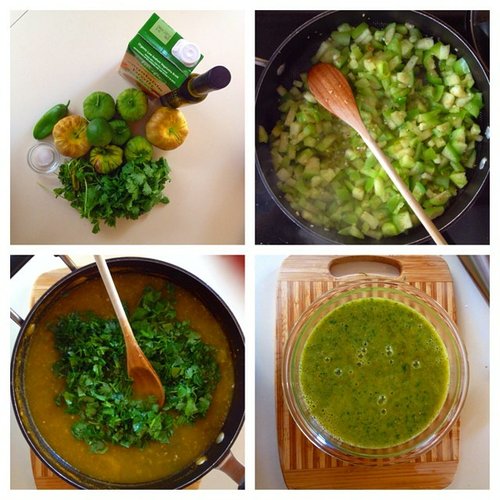 Recently at the Lawrence Farmers' Market, my husband spotted some great-looking tomatillos — those little green husk tomatoes that add tart and tang wherever they go.

We immediately scooped them up and begun to make plans for salsa verde.

If you've never made green salsa at home, it's actually easy to do, if not slightly more involved than making fresh regular salsa. That's because you've got to cook down the tomatillos. Not quite as easy as chopping and blending a few tomatoes, onions and peppers, but totally worth the effort — this sauce goes perfectly on almost anything. Which is good, because it makes 2 cups.

Use it all in a week on various dishes (we've used it on fajitas, salads, veggie burgers and the like) or freeze it in small portions a la pesto and save it for later.

10 tomatillos (husks removed), cleaned and diced (Our tomatillos were really big, so we used fewer)

In a small saucepan over low heat, saute the garlic and jalapeño in oil until fragrant, about 3 minutes.

Add the tomatillos and salt, saute until the tomatillos begin to release moisture, about 5 minutes. Add the vegetable broth, bring to a slow boil, and cook for about 20 minutes, stirring occasionally.

Remove from the heat, let cool until it is not steaming, then add the cilantro and lime juice. Pour into a blender and blend until relatively smooth, about 30 seconds.