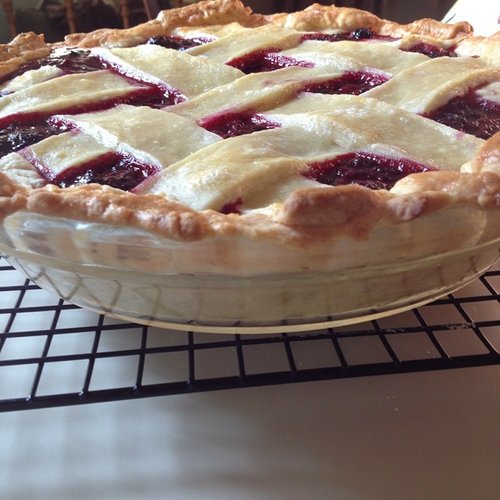 The best wedding present I ever gave. by Sarah Henning

A good running buddy of mine requested at her recent wedding that a few of her guests bake two homemade pies for the reception’s dessert table rather than bring a gift. It’s an idea that I thought was genius. And went along perfectly with the locally sourced theme of this wedding in which 75 percent of the reception dinner for 200 was grown by the bride herself and the rest (save for a bit of watermelon) was bought from local vendors. (And you thought your wedding was crazy to plan.)

In keeping with the locally flavored theme, I wanted to make at least one pie that showcased the abundance of blackberries we have right now in our home berry patch. I also wanted to feature the pie crust my grandma made probably weekly when I was little. As I wrote awhile ago, she was a fabulous cook and I’m honored to have her recipes in my arsenal.

So, for one of my two wedding pies, I decided I’d make pie the old-fashioned way. Grandma’s crust paired with my spin on Sauver’s blackberry pie recipe.

The result, as you can see above, was gorgeous, and tasted great, too.

Now, it’s not exactly the healthiest thing I ever put in this column, however. For a pie more along the lines of what’s usually in this space, check out this recipe, which I adapted into my other pie by making it in a deep-dish pie plate and using cherries for the topping rather than strawberries (I called it Vegan Cherry Cheesecake Pie at the wedding).

1 recipe for pie dough (below)

Zest of one lemon or 2 more teaspoons of lemon juice

A pinch of cinnamon

Unwrap 1 dough disk; transfer to a well-floured surface. Whack it with a rolling pin several times to flatten it out; turn it over and repeat. Roll out dough to form an 11-inch circle and transfer it to a 9-inch deep-dish pie pan. (If dough tears and needs mending, dab a little water where it requires patching and "glue" on a piece of dough.) Cover with plastic wrap and refrigerate.

Beat egg white and 1 tablespoon water together in a bowl and set aside. Roll out remaining dough disk into an 11-inch circle; cut into ¾-inch-wide strips. Arrange strips over pie in a lattice pattern, trim excess dough and crimp edges of pie. Brush crust with egg mixture; sprinkle with remaining sugar.

Bake on the middle rack of the oven until crust is just golden, about 15 minutes. Reduce heat to 350 degrees, bake until golden brown and bubbling, about 30 minutes more. Let cool before serving.

Note: I had leftover dough from the latticing and ended up making “pie dough cookies” with the excess (this is another thing I used to do with my grandma). To do this, combine the remaining dough scraps, roll into a rough circle, and then top with butter and cinnamon sugar. Roll the dough into a log and then cut little pinwheel shaped cookies from the log (cut each slice about a quarter-inch thick). I baked them for about 20 minutes once the temperature was lowered to 350. The kiddo loved these more than the actual pie.

1 ¼ cups shortening (Note: I swapped butter for this recipe, as I don’t like the nutritional profile of shortening)

Cut-in until the mixture doesn’t cling (breadcrumb or shortcake texture). Note: This can take five minutes or more, be patient.

Add wet to dry ingredients a little at a time, stirring constantly until moist-will form a ball when completely mixed.

Chill in discs, wrapped in plastic, for at least one hour before rolling out.