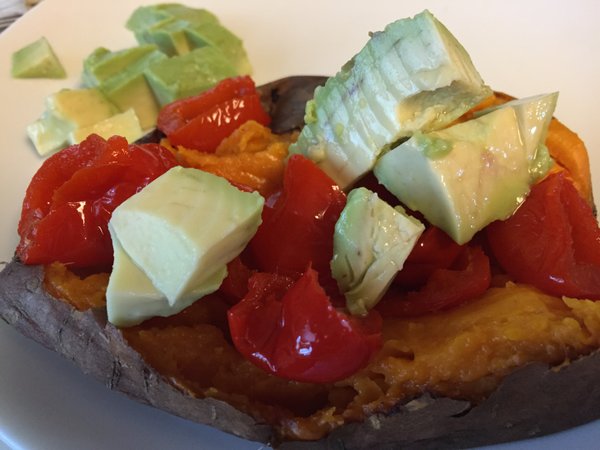 A "baked" sweet potato made in the slow cooker and topped with peppadew peppers and avocado. by Sarah Henning

It’s hard for some people to imagine, but maternity leave isn’t just a 12-week staycation with a cute baby. It’s 12 weeks of barely any schedule, unpredictable amounts of sleep and never knowing when you’ll actually have time to do something.

Which means that I both have time and don’t have time right now to actually get in the kitchen and cook.

There are blocks of time where I could prep and cook a great meal. But the chances of a particular block of time like that being around an actual preferred eating time (breakfast, lunch or dinner) are slim to none. Try more like 5:30 a.m. or 2:15 p.m. or 8:30 p.m. Not exactly ideal.

Plus, half the time I’ll either end up with an hour I didn’t know I was going to get (surprise!) or plan on time that’s not there (double surprise!).

Obviously, it’s sort of hard to time something in the kitchen if you have no idea if you’ll have to tend to a fussy baby in the middle of chopping things or right when you need to flip something in the oven. Thus, my cooking has been pretty much limited to weekends — not helpful when I want to make something fresh for lunch or dinner.

To make things easier, I’ve been trying tricks that I’ve heard about but never necessarily tried. Up first: the genius use of a slow cooker to “bake” sweet potatoes.

I heard about this cooking hack more than year ago, but I’d never actually decided to give it ago until I really, really needed it to work. Which is dumb, because all you have to do is wrap potatoes in foil and place them in your slow cooker. I have no idea why I waited so long.

Prep took about a minute. And four hours later, I had a blissfully perfect baked sweet potato, plus three more to have for leftovers during the work week, when eating lunch is usually a difficult, solo affair.

I know it sounds silly that it’s easier to have something cook for four hours than for 45 minutes, but if you’ve ever lived on the uneven terrain that is fresh parenthood, you’ll know exactly why this seems so much easier.

And if you haven’t or are long past that point? You’ll still love the “set it and forget it” easiness to this recipe.

Wrap each sweet potato in foil. (No need to poke holes in the potatoes). Place the wrapped potatoes in a single layer in a slow cooker. (Mine can fit four, though some may only fit two or three.) Cook on high for 4 hours or on low for 8 hours. Remove, split open and enjoy.