Turn a BLT into an addicting AST 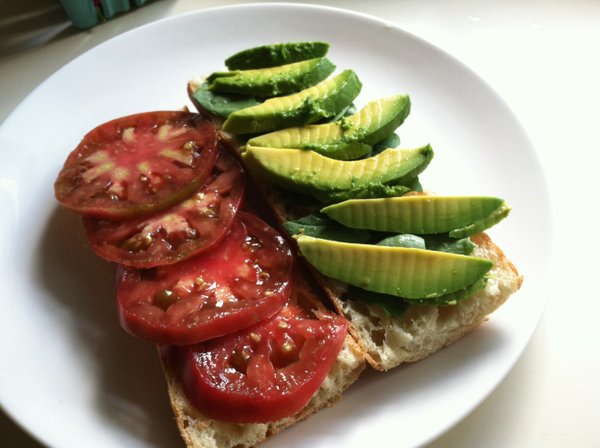 The sandwich I've eaten for weeks on end. Don't judge me. by Sarah Henning

Confession time: If you follow me on Twitter (@shhenning), you might already know that I’m pregnant. And probably going to have another kid just about any second now.

In any case, as most of you know, pregnancy often comes with its fair share of cravings. In fact, if you look back in these posts, you can tell I was having a major love affair with curry during my first trimester.

But in August, a new, forceful craving emerged: the BLT.

Which is funny because I haven’t had bacon in probably 20 years or more.

Though, it wasn’t the bacon I was craving, per se, it was the mixture of crusty bread, juicy tomatoes and mayo that I really, really wanted.

So I came up with my own twist on the BLT: The AST, otherwise known as the avocado, spinach and tomato sandwich.

I’ve had probably three a week since. Don’t judge me. The baby loves it. Apparently, she’s as much of a “rut” eater as I am.

Recipe note: I know that most people probably eat their BLTs on sandwich bread. I prefer a baguette because when combined with mayo, it reminds me of some truly great sandwiches I had while studying abroad in Spain in college. Even if you’re not a crusty bread person, I urge you to give it a go. You might just love the hard/soft combo of ingredients.

1/3 to 1/2 crusty baguette (We used Wheatfields), sliced in half

Half an avocado, sliced

Mayo, Vegenaise or other condiment of choice

Slather both halves of your baguette with mayo. Top with spinach leaves (stems removed). Place avocado slices on one half and the tomato slices on the other half. Smoosh together. Enjoy.