The tale of the Thai dragon peppers 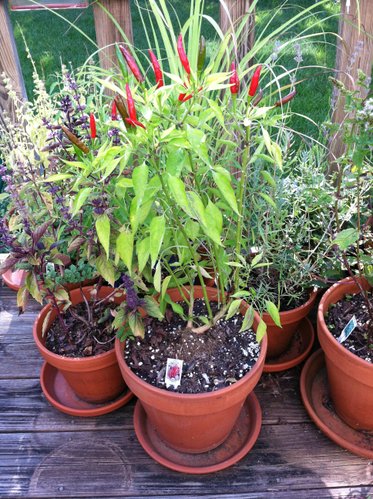 I’m the garden planner in the family, but this year, the hubby made a special request after spotting the tag of a transplant at Vinland Valley Nursery: a Thai dragon pepper.

Though the name alone was enough to conjure visions of our family turning into a clan of fire-breathing Medieval beasts, the hubby was way more jazzed about the spicy possibilities than anything else we’d planned for the Henning Garden 2014, so we bought it.

In July, the tiny peppers on our single little plant started to turn red. And, suddenly, we realized we’d actually have to figure out what the heck to do with our scarily named cultivars. Surprisingly, Mr. Let’s-Buy-This-Terrifyingly-Hot-Pepper didn’t immediately know what he wanted to do with it.

So, we made salsa—mostly because it seemed like step one in conquering (and understanding) the Thai dragon. The one we picked to try roasts the peppers first before putting them in a fresh tomato-and-onion salsa. The roasting added great, professional-grade taste to the salsa. Or, so said my husband, who was the only one brave enough to try it.

Note: After some research, we found out that the Thai dragon’s opening bid on the Scoville scale is 75,000 units—or just less than a habeñero pepper, which has a starting value of 100,000 units. For reference, a jalapeño starts at 3,500 units.

½ teaspoon salt or more to taste

To roast the chiles: In a large saucepan, bring 1 quart of water to a boil. Have ready a medium-size glass or metal heat-resistant bowl. Heat a cast-iron skillet over medium heat. While the skillet is heating, slice open the chiles, remove the stems and seeds and open the chiles so that they can be easily flattened when pressed with a spatula. (Wear gloves when handling hot chiles.) Place the chiles in the heated skillet and use a metal spatula to press and flip them frequently to toast, about 1 minute. Watch the chiles carefully to prevent them from burning. Remove the skillet from the heat and transfer the chiles the heat-resistant bowl. Pour the boiling water over the chiles and set aside for 10 minutes, to allow the chiles to soften. Drain the water from the chiles. Set aside.

Mince the cooled chiles as finely as possible and place in a mixing bowl.

Add the tomatoes and onion to the chiles and stir in the lime juice and salt. Chill the salsa for 30 minutes or let sit at room temperature, for the flavors to blend and the tomatoes to tenderize and release more of their juices.