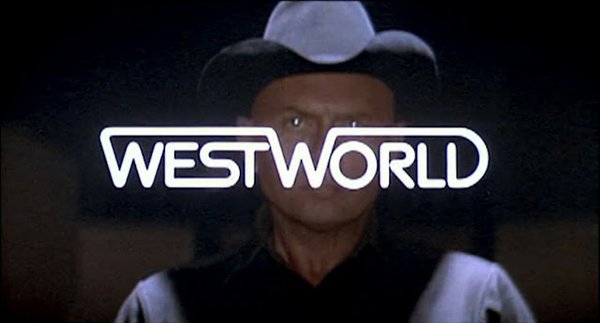 When I head down to the video section of my local library to choose a movie to review. I usually avoid the Westerns. I don't care much for Westerns. Most of them look the same to me--they always involve cowboys, they always involve guns, there's always a stampede of cattle, they always have one scene in a saloon where a fight eventually breaks out, there's always the final shootout where the good guy and the bad guy stand at opposite ends of the street with their hands hovering over their weapons, and on a few occasions there's a damsel tied to the railroad tracks. Yeah, I know there were good ones like True Grit and The Magnificent Seven, but it isn't really a genre that excites me very much.

But for the past few days, there has been one DVD that has caught my eye every time I browse the science fiction movies. I read the back of the DVD cover several times and the premise was just too good to pass up.

Written and directed by Michael "Let's Use This Idea Again in 20 Years, Only with Dinosaurs" Crichton, Westworld takes place in the futuristic adult amusement park resort of Delos, where for a meager $1,000 a day, rich people can visit one of three historically-themed areas - Romanworld, a place modeled after Pompeii in the decadent and lustful days of ancient Rome, Medievalworld, featuring 13th-century Europe and all the swordplay and chivalry you could want, and, of course, Westworld, which takes guests back to 1880 in the rough and violent days of the Old West. In Westworld, as in the other two, visitors are invited to indulge their every fantasy--rob a bank, bust out of jail, get into a barfight, have a shootout with the meanest gunslinger in town (played by Yul Brenner, who's even dressed like his character from The Magnificent Seven), and even drop by a brothel and--well, you get the idea.

The parks are all populated by lifelike robots who act out characters in the world to which they are allocated--so lifelike are they that they look, act, talk and even bleed like real people, but fortunately they are all played by real actors in this film so as to avoid the whole "uncanny valley" problem with robot movies. (You hear that, Robert Zemeckis?) They are programmed to interact with the guests and make their visit to Delos a more realistic experience, and borrowing a page from Asimov's Three Laws of Robotics, they are specially programmed not to harm the guests, whereas the guests can kill them if they so choose. Heck, the guests can even have sex with them if they like.

But wait--how do you tell the androids apart from the guests? Well, apart from the fact that the robots' hands don't look quite right yet, in Westworld the guns they provide the guests, while they do shoot real bullets, are also equipped with heat sensors which prevent them from going off when pointed at any living thing.

Well, this is from Michael Crichton, don't forget, so don't get too excited.

Our movie today focuses on Peter Martin (played by Burt Reynolds lookalike Richard Benjamin). It's his first time in Delos and he's with his friend John Blane (James Brolin), and once they get there the two of them take a tram driven by robotic stewardesses to Westworld.

Their hotel is on a Wild West movie set (Medievalworld's is in a still shot of a castle, while Romanworld is just shown as an outdoor garden with statues around it).

They wet their whistle at the saloon where they meet the gunslinger, who bumps into Peter, makes him spill his drink, and then sits down next to them casually hurling insults at Peter until the two of them draw their guns and Peter shoots the robot down in slow motion as well as cold blood.

Peter gets thrown in jail for shooting the gunslinger again when he ambushes John in their hotel room, and John busts him out, shoots the sheriff (but does not shoot the deputy) and the two of them ride off into the outskirts.

They even pay a visit to Miss Carrie's brothel in town, where they find some female robots and--

Well, let's just say I hope these robots are properly and regularly cleaned after use.

While they're at the brothel, Delos maintenance crews are cleaning up the spoils of a bank robbery while some technicians in the underground control room are meeting to discuss some problems they've been having with the robots - apparently they've been breaking down at an increasing rate lately. At first they were minor malfunctions until six weeks ago, and now robots all over the park have been having problems. It's almost as if there's some sort of cyber-disease infecting the machines in the park.

...OHH, they mean a VIRUS. Okay. This was before there was any such thing as network security or firewalls, when computers weren't regularly interacting with each other, so I imagine back then you had to program the robots and HOPE that nothing went horribly wrong. They don't really mention where this...virus comes from--some latent programming error, some technical glitch in the robot manufacturing area, or perhaps all the robots in the park have become self-aware and are now taking their revenge on humanity for all the abuse they've suffered at the hands of the park's guests. All are equally viable.

More strange things occur when John gets bitten by a rattlesnake, a wench droid from Medievalworld refuses the sexual advances of a guest, and another patron is later stabbed with the Black Knight's sword after an unscheduled ambush in the breakfast hall.

Meanwhile, we see a quick glimpse of the android players going all Caligula on the guests at Romanworld.

While this is going on, Peter and John have just come to after the film's obligatory barfight (complete with slow-motion punching) and meet the gunslinger once again. John attempts to engage the android in a quick draw shootout but is shockingly gunned down in the street for his trouble. All Peter can do is run when the gunslinger starts shooting at him as well, which leads to a chase on horseback through the outskirts of Westworld, with the robot aided by an infrared heat scanner and Peter aided by a fleeing engineer who suggests he throw acid into its eyes but otherwise tells him he's doomed.

Peter escapes into the corpse-littered Romanworld where he conveniently finds a manhole cover leading to the underground control area and repair shop beneath the park. He passes by the main control room to find all the engineers sealed inside, dead of asphyxiation. Their attempt to power off the robots by shutting off the electricity in the entire park left them sealed in the room with the ventilators turned off, and they eventually ran out of air.

Not a good idea to run the ventilators and door locks on the same circuit as everything else in your UNDERGROUND CONTROL ROOM. Especially when you need to shut the power off to quell a sudden robot uprising.

Peter finds some bottles of acid and takes the now-dead engineer's advice, throwing it in the gunslinger's face when it finally catches up to him, but it has about as much effect as oil-based makeup with ground-up Alka-Seltzer if you threw water onto it.

We finally end back in the breakfast hall in Medievalworld, where lucky for Peter the gunslinger's heat sensors are confused by the numerous torches lit along the walls. These torches also serve an equally useful purpose when Peter uses one to light the metal man on fire and escape into the dungeons, where after rescuing a girl in chains who turns out to be a robot, the gunslinger's charred, rundown husk of his former self arrives to give him one last scare before falling over and breaking down for good in a shower of sparks.

Of all the movies I've reviewed so far, Westworld has the distinct honor of being the quickest film I've ever watched. At a running time of 88 minutes, that's not too surprising...and yet it is sort of surprising since nothing too exciting happens for the first twenty. Maybe it's because I'm not too keen on Westerns, but much of the first part plays out like James Brolin and Richard Benjamin in a Western. It isn't until around the barfight scene where things start getting interesting, once the robots start going haywire and the futuristic dream turns into a nightmare.

I will say, though, that veteran actor Yul Brenner does turn in a chilling performance as the homicidal robotic gunslinger. I imagine it's because of his experience acting in Western movies. All he has to do is play the rough, tough cowboy type he's known for, which fits the cold, unfeeling android that is his character. You only have to get a closeup shot of his face to tell that he isn't human. In fact, you can't really tell which of the cast are human or not unless we're previously introduced or we see them from close up, which sets a much, much darker tone than giant reptiles with tiny arms that can eat a lawyer sitting on the toilet in one bite.

Adam Lafferty also likes to talk about movies, among other things, on his other blog, popculturevomitbag.blogspot.com.