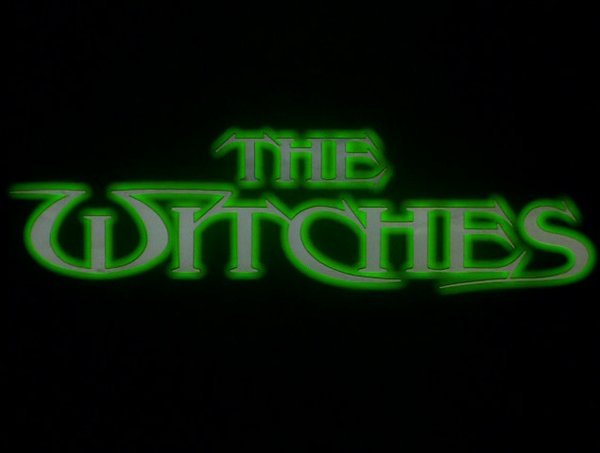 "The Witches", 1990, directed by Nicolas Roeg. by Adam Lafferty

Ah yes. Roald Dahl. My and many a person's favorite children's author, whose books about chocolate factories, big friendly giants and telekinetic child prodigies have wowed readers for decades, and whose books have just as often been turned into feature films.

Based on the eponymous book written by Dahl (who died three months after it was released), and executive produced by Muppet man Jim Henson (who died three months BEFORE it was released), The Witches was released in 1990 to widespread critical acclaim, revitalized the film career of its director Nicolas Roeg, who had previously made independent to small-release films to less critical applause, and was nominated for five Saturn Awards and a BAFTA while its top-most billed actress won two American film critic awards.

Shame its box office takings were underwhelming. As is so often the case with the movies I do.

Let's start with the basics: WITCHES ARE EVERYWHERE.

They don't fly on broomsticks or have warts. They look just like normal women.

They do normal things and live normal lives.

And they REALLY HATE CHILDREN. With an unbridled passion.

In fact they hate them so much they want to KILL THEM.

But not so much that they risk being sent to jail for something really horrible. No, they are much more subtle than that. Witches have an acute sense of smell which they use to sniff out a child (the clean ones smell like fresh dog's droppings to them) and then at the time when their target is least suspecting, they strike...and the child is never heard from again.

Your child's only hope is to know when they're looking at one, whether it's the rash from their wigs, the gloves on their hands, the lack of toes on their feet which makes it hard for them to wear fancy shoes, their purple-tinted eyes, or when one holds their nose when they walk by.

The common witch, shown here, is one of the top modern dangers to children among Boy Scout troop leaders and Catholic priests. by Adam Lafferty

Jasen Fisher from Parenthood stars as our main protagonist (let's call him Luke, since the movie kinda does, too) who lives with his Norwegian grandmother (Swedish film starlet Mai Zetterling) in England after his parents are killed in an automobile accident. His grandma's had some experiences with witches--as a child in Norway she lost her best friend to one, and she also lost a finger during an encounter with one. 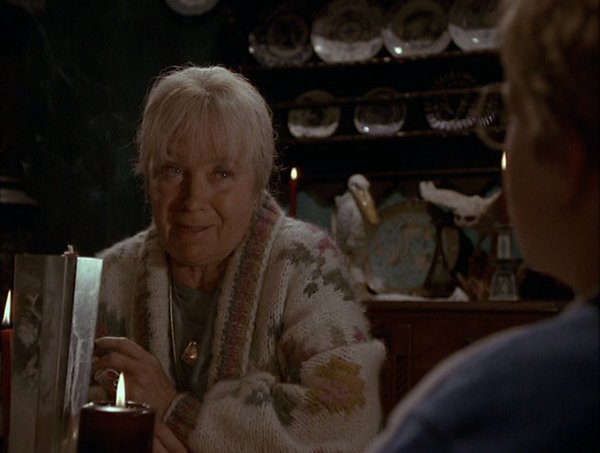 "...and then the witch cut the little boy into pieces and served him up with fava beans and a nice Chianti, all because he didn't do his homework." by Adam Lafferty

One day, on Luke's ninth birthday, his grandmother suddenly becomes ill. The doctor diagnoses it as a mild case of diabetes and recommends that she and her grandson take a nice seaside holiday at a fancy hotel in Cornwall so she can recover. As it happens, that same hotel is hosting the annual convention of the Royal Society for the Prevention of Cruelty to Children, a charity organization helmed by a snooty woman named Miss Eva Ernst (Anjelica Huston).

Luke's grandmother recognizes Miss Ernst, but cannot remember from where. Can't imagine why she does. I mean, Morticia Addams running a charity group? Doesn't sound suspicious to me.

As a birthday present, Luke's grandmother gives him two mice as pets, which he names William and Mary. They bring them along to the hotel, where they are quickly brought to the attention of Mr. Stringer, the hotel mana-- 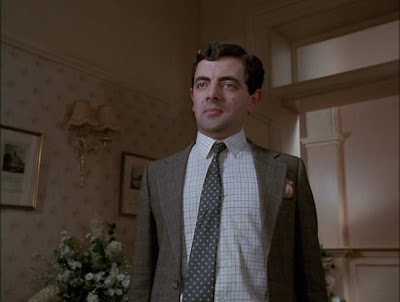 Risking the wrath of the hotel staff, Luke sneaks them out of his room and into the ballroom to train them to do tricks just before Miss Ernst leads the RSPCC members into the room en masse for their meeting and lock the doors behind them.

One of them strangely starts to scratch at her scalp.

Another one Luke notices has purple eyes.

Wait, what? They're all witches? NAWWWWWW. Suerly not. A charity that aims to protect children can't possibly be trying to kill them. I mean, I'm sure their leader, Miss Ernst is a charming, generous lady who wouldn't harm a hair on their-- 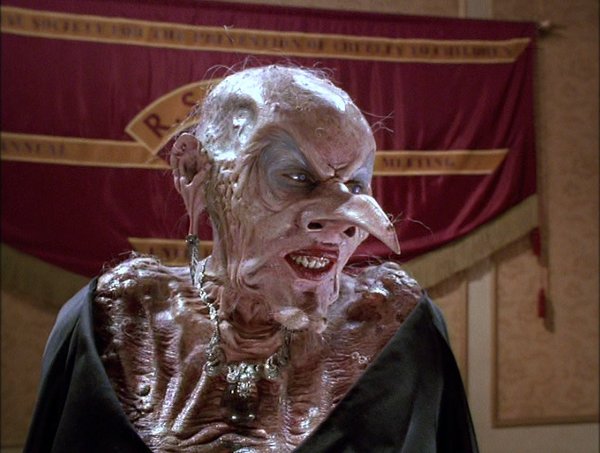 KILL IT WITH FIRE.

Eva Ernst, now revealed to be the Grand High Witch of All the World, wastes no time berating the witches of England for their lack of success in wiping out all of the nation's children, as the parents of England are clearly making them faster than they can kill them. She orders them to have all the children exterminated by their next annual meeting, and then introduces a new scheme with which to do so: every witch will resign from their jobs and buy a candy store where she will sell confections laced with "Formula 86", a potion of which one dose will in two hours' time turn whoever ingests it into a mouse.

I suppose it never occurred to her to find some way to discourage all the adults in England from having sex to INSURE that England will be rid of children forever. Not in a kids' book, anyway.

As a demonstration, she's invited a fat kid named Bruno Jenkins (Charlie Potter) to the meeting after giving him a chocolate bar tainted with "Formula 86" about two hours ago. The doors are unlocked, and Bruno walks in demanding the six other bars of chocolate he was promised, and sure enough, at two hours' time exactly, some wiggling, smoke effects, puppetry and reversed film later, Bruno is now a mouse of his former self. 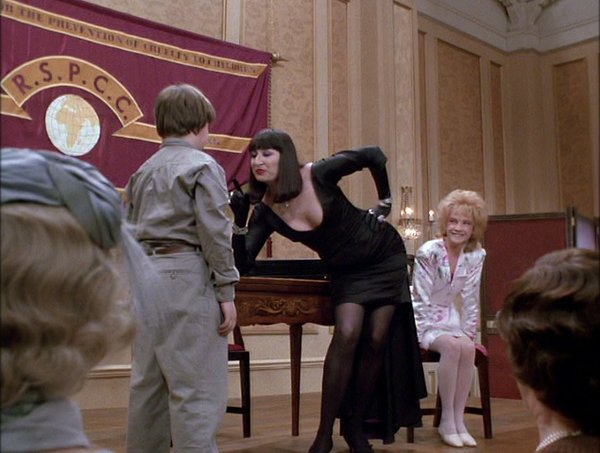 With any luck, Bruno's voice will drop and they'll think he's a teenager. by Adam Lafferty

How quickly the potion works after more than five doses soon is demonstrated when after the meeting ends, one of the witches gets a quick whiff of dog's droppings, which sends all the witches sniffing around the stage. In the ensuing clamor Luke makes a break for the doors and a chase sequence starts.

Alas, the Grand High Witch captures Luke, somehow smuggles him back into the ballroom without anyone else noticing and proceeds to pour the whole bottle down his throat. Formula 86 takes effect instantly as right away Luke shrinks down to mouse size and then escapes everyone stamping on his now empty clothes.

After finding Bruno, who has to be TOLD that he's just turned into a mouse, Luke returns to his room and explains to his understandably startled grandmother that the hotel is crawling with witches, and is very quick to formulate a plan--with his grandmother's help, Luke sneaks into the Grand High Witch's hotel room (conveniently one floor below his) and absconds with a bottle of Formula 86, which he plans to introduce into the food at dinner that night, where the Grand High Witch and her entourage, as the RSPCC, will be attending a special banquet in their honor. 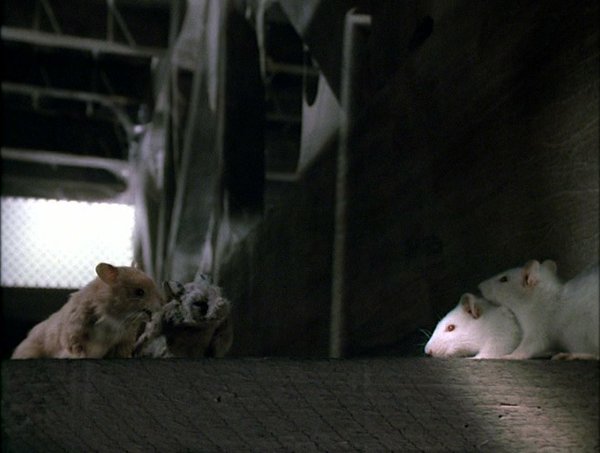 Oh, get a room. by Adam Lafferty

A couple of times, Luke's grandmother attempts to return mouse-Bruno to his parents, who had both also ordered the same soup that the RSPCC were eating, both times ending very awkwardly. At least the second time is concurrent with all the witches suddenly gagging and convulsing and growing fur. That and Bruno didn't have his tiny mouth full of food at the time.

With all of England's witches suddenly turning into mice, all hell breaks loose in the dining hall. Screaming, stamping, running around screaming and stamping. Grandmamma talks down the Grand High Witch has she slowly revers to rat form and then gives Blackadder the distinct honor of dispatching her himself. 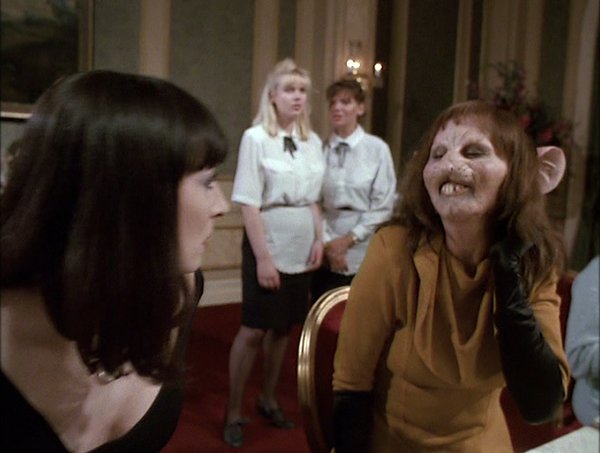 Back at his grandmother's house, a trunk is delivered with all of the Grand High Witch's money inside, as well as an address book with the names and addresses of all the witches in America. Luke and his grandmother discuss the idea of traveling to the States as the two of them turn in for the night.

And they all, except for the witches, lived happily ever after.

I have neglected to mention that in the movie, the Grand High Witch has a secretary named Miss Irvine (Absolutely Fabulous' Jane Horrocks), an abused and long-suffering subordinate who finally resigns when her boss won't let her sit at the banquet table and sends her back to her room. At the end of the movie she follows Luke all the way to his house and in the middle of the night she stands outside and shoots some beam of light out of her fingers to turn Luke back into a human being. She even gives him his glasses and his friggin mice back. Luke and his grandmother wave at her as she drives away to go fix Bruno, too. 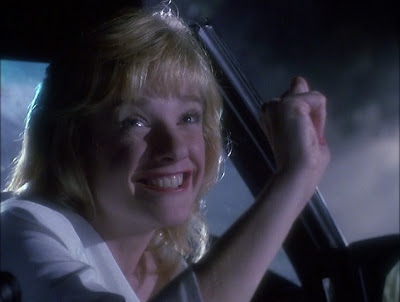 Damn it Glinda, I know witches have an image problem, but did you HAVE to bring it up in a children's film? by Adam Lafferty

Roald Dahl books have not always made an easy transition to the silver screen. Ones I do remember liking as a kid were Disney's James and the Giant Peach and Danny DeVito's Matilda, though in the case of the latter the book was slightly better, and Wes Anderson's Fantastic Mr. Fox was pretty good too; however, given the family-friendly morals prevalent in all-ages cinema today, I don't think George's Marvelous Medicine would survive a trip through the Hollywood movie machine. Meanwhile, Charlie and the Chocolate Factory has already been adapted twice--the original film with Gene Wilder is considered a classic, yet Dahl hated it for deviating from the original story, a mistake which was, sadly, more grossly repeated in the ending of Tim Burton's 2005 remake, which ruined a film that was otherwise more true to the book.

Roald Dahl hated this movie too. Largely because of the ending.

Can't say I blame him. Why did they turn Luke back into a boy at the end? It doesn't make sense. What, are there GOOD witches now? Is this some Wizard of Oz-type world where there are good witches as well as bad witches? Or were the screenwriters so concerned with the film's marketability that they gave it a Hollywood ending? Weren't Luke and his grandmother about to set off to rid the world of all witches? Because this final scene sort of implies that now they don't have to anymore, and the sinister activities of a child-hating minority of women shall continue interrupted, which if you ask me is more of a downer ending that the one in the original book.

Other from that, the rest of the movie is okay. Good makeup and visual effects and great performances from Anjelica Houston and Rowan Atkinson. Overall, a very fun and enjoyable movie. 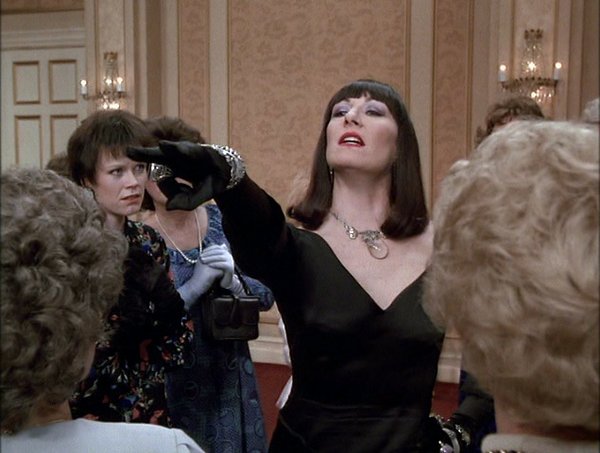 "Next ve declare var on Rrrrrraul Julia. I hear he has a veakness for French accents." by Adam Lafferty

Adam Lafferty also likes to talk about movies, among other things, on his other blog, popculturevomitbag.blogspot.com.