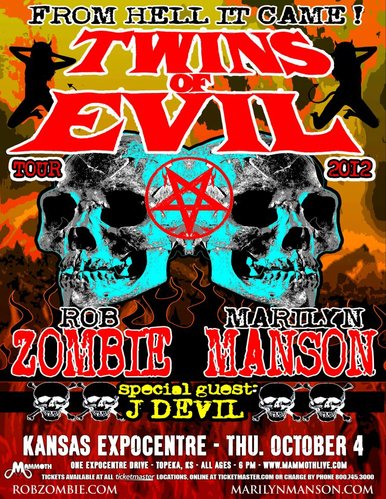 In a double-header that can only be described as heaven to horror movie devotees and outcast youth, the Twins of Evil Tour, with Marilyn Manson and Rob Zombie, comes to the Topeka Expocenter on Thursday, October 4. Also on the bill is another icon of the nu-metal scene: Johnathan Davis of Korn's side project, J Devil, opens the all-ages show.

A Topeka show this big is a rare occasion, and with it coming just a few weeks before Halloween, it's probably going to be a must-see for current and former misfits all over the east side of the state.

Although both Manson and Zombie have been though the region in recent months -- both in May, with the former in Kansas City and the latter in Wichita -- never underestimate the power of a double-trouble, icons of evil show such as this. 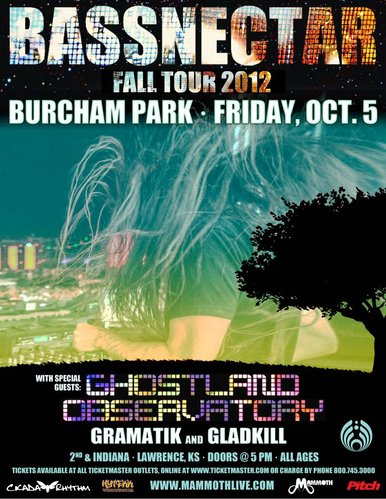 It's sucked having to keep this under my hat, but I was asked to keep quiet until the City Council approved this show. However, now that Mammoth Productions announced it, I'm guessing it's okay to share that Burcham Park hosts Bassnectar with Ghostland Observatory, Gramatik, and Gladkil on Friday, October 5.

This marks the first touring show to hit the park at 2nd and Indiana since the Brewgrass Festival in September of 2006. While Burcham played host to a variety of concerts through the late '90s and early '00s such as Warped Tour, the Tattoo the Earth Festival, Bleeding Kansas, and so on, the parking and noise situation made it more and more difficult to acquire permission from the city.

In the interest of full disclosure, I live just a hop, skip and a jump away from the park at 3rd and Illinois. Nevertheless, I'm pretty excited to see a show -- especially a dancey-pants event such as this -- to come to the riverside. It's a pretty amazing thing to watch bands rock with the Kaw flowing right behind them.

Who is the presale through?

Who's going to supply the weed for the Bassnector show with the big bust a couple of months ago?

weed will probably not be a big concern for this crown and trust me, if people want it, they can still get it. It's called commodities and if our government was worth a shit they would figure it out.