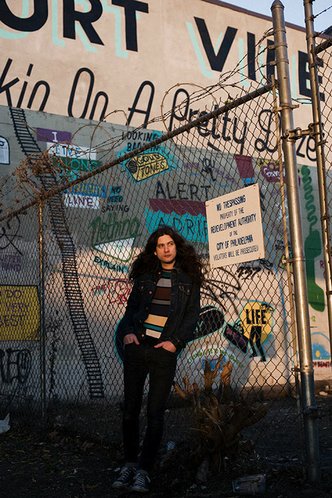 With seemingly simple guitar strums and unforced (even darkly humorous) lyrics, Vile’s music comes across as casual and resigned. The Philadelphian’s songs can be languid, droney and flush with elements of pop psychedelia, rock and folk. It is a distinctive sound that he refines more and more with each studio album, one that he's bringing Friday to the Granada in Lawrence. Beginning with self-released CD-Rs and eventually finding a home with indie label Matador, Vile and his recording and touring unit, The Violators, have received critical acclaim and a steady fan base for Vile’s brand of songwriting and the group’s vivid live performances. It’s a sound that has become somewhat emblematic of Philadelphia.

So much so that the City of Brotherly Love has decided to honor the 33 year-old musician with his own day, on Aug. 28.

“My first reaction was, it’s a total honor, it’s the Liberty Bell award, which is the highest honor you can get if you are native of Philadelphia,” Vile says. “When they said the day, I was like, that’s not every year is it?” Vile’s manager explained that it was only for this year. “I was just like, thank God, I was ultimately thinking about my friends and how it sounds kind of funny.”

This year is turning out to be big for Vile and his crew. Vile will receive the Liberty Bell award four months after releasing his biggest album yet, "Wakin on a Pretty Daze." Following his breakthrough, 2011’s "Smoke Ring for My Halo," the album has further raised Vile’s profile, with lengthy tracks that build on the type of repetitive and drone-folk structures that he developed early in his recording career.

Much of these songs were written in hotel rooms and sound checks while Vile was touring heavily for "Smoke Ring For My Halo," mostly because, as Vile states, “there’s so many parts” to these songs. (Kind of title track and opener “Wakin on a Pretty Day” expands and dilates over the course of nine minutes.)

“I would take certain parts of songs or riffs and slowly write them, as opposed in the past where I would write a song start to finish, more or less,” he says.

“A lot of it for sure was on the road because that’s where I was. Thank God I could tap into that because it’s not the easiest to be touring like crazy and switch the channel to the opposite and write.”

Vile says he gets pretty obsessive about his music and the details in his songs.

“That’s kind of our bread and butter to just get really deep in there. Y’know, the longer you work on it, the more you are like, ‘This record is almost perfect except for this 30 seconds.’… It has to be sort of perfect to me, in not like a pristine, smooth way, but in a sort of emotional, sort of cosmic way,” he says.

"Wakin on a Pretty Daze," even with its ruminations on small human themes, expands to that cosmic level. When asked about where that comes from, Vile says, “you know, I talk about it on the songs. Ultimately, ideally it’s just being a dreamer, I guess.” Lyrically the songs have a hazy quality, borne of great sensation and the idioms of day-dreaming, while at the same time containing Vile’s unique sense of wisecracking, one thing that can be easily missed by listeners and critics.

“The people who review your records — not everyone but [some] of them have their own agendas, too,” Vile says. “They kind want to be like, playing a song with the way they are writing and talk about their problems or talk about how I am totally dark in the doldrums.” Vile points to an example of a music website misquoting his lyrics and then using it against him. “Just through some lyrics, [they] act as if they know me, know where I am coming from, and don’t get the jokes per se,” he says.

Vile says his music is “totally who I am, even if it is a total psychedelic thing. It’s my personality or it can be obviously about my wife or my kids, or a friend.” He adds, though, that he just doesn’t want to “make it too straight or literal. If I have a line that is revealing to me or something, then I put a poetic line or smear psychedelia.”

“I’m doing what I want to do and I’m blessed to have enough people understand or take it for what it is.”

Kurt Vile and the Violators will perform at 9 p.m. Friday at The Granada, 1020 Massachusetts St., with openers Sonny and the Sunsets. Tickets are $15 in advance and $17 day of.

I can't believe this show has not yet sold out! I'm proud to say that I've had my tickets for well over a month now and can't wait for tonight! People just don't know what they're missing. KV is great! See ya at The Granada...