In Search of the Perfect Grunt with Jabberjosh 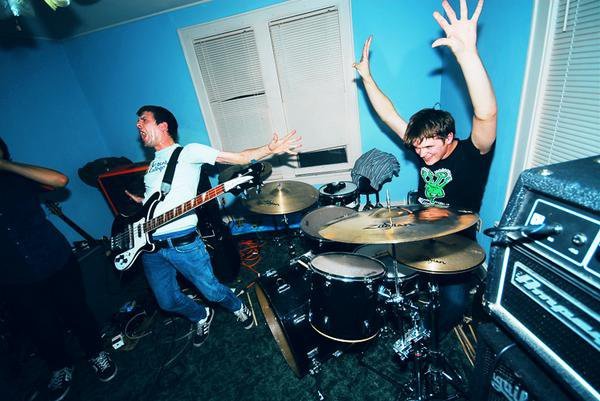 There was a time, not so long ago, when there was somewhat of a void in the Lawrence music scene as far as “heavy” sounding bands go. Luckily that period came to an end when two brothers, Sam and Will Gunnerson, emerged from their basement - and out from the the shadows of playing rhythm section or roadies - and claimed the spotlight as Jabberjosh.

The band describes their music as “Power Slop,” a label that betrays it talent for crafting drum-and-bass compositions that are as musically versatile and complex as they are punishingly loud. I recently spoke with the sibling duo about touring, celebrity birthdays, and how their upcoming full-length pays tribute to blues-rock pioneers ZZ Top.

“One of our favorite things about touring is food,” explains Sam, elder brother and bassist in Jabberjosh. “We love going and eating at the most ridiculous places right when we pull into town, like ‘Okay, tell me a place that you can only get here that’s just amazing’.” Two of their favorites are Hot Doug’s and Kuma’s Corner (both in Chicago), where the burgers are all named after metal bands.

Will Gunnerson plays drums in Jabberjosh and keeps record of their shared history. “This is probably our sixth or seventh tour, somewhere around there,” he recalls. “They’ve been different lengths, some mini-tours... I think the longest we’ve gone out has been 20 days or so. We’ve usually gone east or up north. We’ve never gone west.”

But that’s not the only thing keeping the duo from achieving stardom. Sam explains, “Will got food poisoning one time when we went into Nashville and we had to say ‘Yeah, I don’t think we’re gonna be able to play’... and actually each time we’ve tried to play Nashville since we haven’t been able to either.”

“One time was a tornado, and the other I was sick,” says Will, “So maybe someday.”

But the brothers, known for their likable and easy-going personalities, take all things in stride with a glass-half-full sense of optimism. “We’ve had nothing but positive things happen since we’ve been on tour really,” Sam says, knocking on wood. “Even if the car breaks down or something, usually there’s a really good story that comes out of it.”

Talking with the members of Jabberjosh shakes up the stereotypes surrounding musicians who cater in loud and heavy rock. The Gunnerson brothers in turn show a deep appreciation for their peers and fans alike. “I gotta tell you... some of the heaviest bands we’ve ever met? Nicest dudes ever.” says Sam. Will finishes his thought, “Just the gnarliest sound to their music and they’re just total sweethearts.”

“That’s always been the thing about traveling: We just to go to cities where there are a lot of friends,” says Will. “The hospitality of people always blows me away. Just how nice they are, just a good sense of community beyond all that networking is a really fun thing...And for people that we’ve had a really good time playing with, we just want to return the favor.” 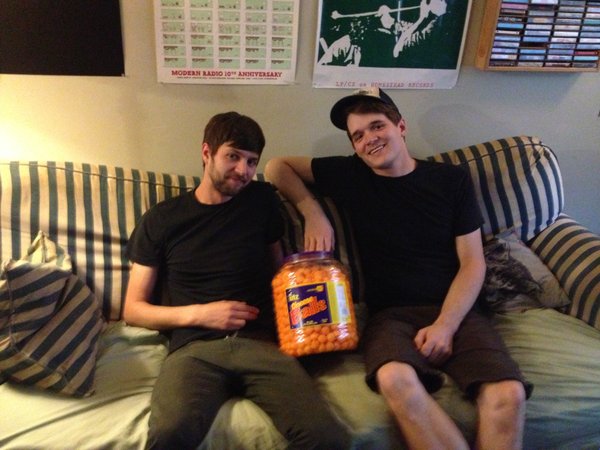 I moved to Lawrence the same year as the Gunnerson brothers, but they came with a pedigree from Wichita’s DIY scene. As Sam recounts, “When we first started playing in bands we were living in Pratt, about 70 miles away from Wichita. And we would go constantly and there was just an unbelievable scene, and we got to meet all these people and see great bands.”

“There’s some really amazing talent down in Wichita. It’s a place of inspiration,” adds Will.

“I mean Will and I were born down there, and it’s still kind of our home," Sam says. "Usually every time when we roll into Wichita we’ll listen to Patsy Cline’s ‘Back in Baby’s Arms’ as we get into town.”

The brothers share a deep appreciation for all types of music. But their playful love of pop culture is perhaps most embodied by “The Birthday List,” something that has become a ritual at Jabberjosh shows.

“It began with the first show, where we really just wanted to announce which famous people we celebrated our birthday with, and then it just kind of continued on.”

It may not sound like the sort of live antics audiences expect from a heavy band, but it’s one they’ve come to love - the loudest show in Lawrence with it’s own “Late Nite” segment built-in.

As Sam explains, “We try to keep it fun. Whether it’s playing stupid covers that are three seconds long, or just doing some weird theme song - we do the Home Improvement theme song, and we have a vibraslap at the end of it because that’s the only musical instrument that sounds like the Tim Allen grunt... at least, that we know of.”

“That we know of,” Will repeats. “We’re still trying to find the perfect grunt.”

Jabberjosh is currently putting the final touches on a new record titled “Dos Hombres” (a play on the ZZ Top classic “Tres Hombres”). “We could have called it Dos Hermanos, but Dos Hombres has such a better ring to it,” says Sam.

The album was recorded with producer Luke Tweedy at Flat Black Studios in Iowa City, where the band previously worked with Tweedy on its tape release “Free Your Ass and Your Mind Will Follow” (another parody-title, referencing Parliament Funkadelic)

“We’re really excited to get that out, because after this tour we’re gonna take a little bit of a hiatus. We’ll never break up,” Sam clarifies. “I mean, we could never do that really. But there’s a couple things Will and I have been wanting to do outside of the band, so this is kind of gonna be our last show for a little while in Lawrence.”

“But, we’ll be back,” both Gunnerson brothers chime in unison, finishing each other’s sentence.

Jabberjosh will a tour kick-off show with Psychic Heat and Cricket Wand this Thursday, Aug. 8, at The Replay Lounge, located at 946 Massachusetts St.