Psychic Heat Turn Up the Temperature on "Lighter and Brighter" EP 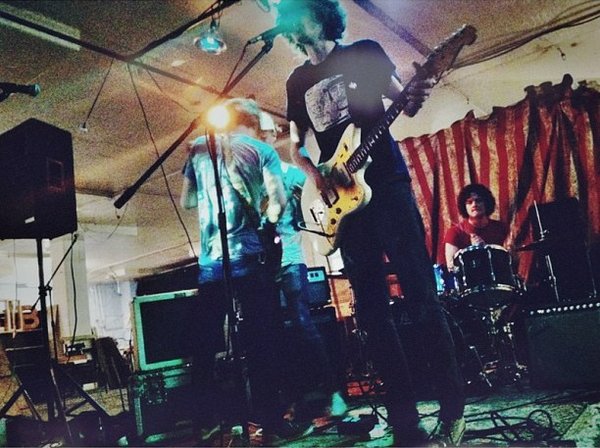 Psychic Heat emerged onto the Lawrence music scene just this past spring, but the young band came out the gate running, bursting at the seams with loud grooves befitting their name and an energetic live show that’s already gained them plenty of local attention. In their first month of existence alone, the band has managed to pack in five shows a week at their busiest, playing everywhere from Love Garden Sounds and the Replay Lounge, to more out of the way venues like Farmesan Records and Produce (a DIY collective based on a farm in nearby Tecumseh) and the band’s own rehearsal/event/arts space, Studio B (located just off the Turnpike in North Lawrence).

“We love doing kind of off the beaten path shows with kind of a DIY mentality. Like ‘Oh yeah we’ll go out and play at a farm, that sounds awesome’,” says Evan Heard, lead singer and rhythm guitarist for Psychic Heat.

“It’s really fun to do those Friday night Replay shows, but its also really interesting to do those out of the way ones because they bring a different crowd, and you have no idea what the perception’s gonna be,” adds Tanner Spreer, lead guitarist and the other founding member of the band.

“I mean in the beginning it was just like ‘I just wanna play a show’ and now we’re playing all these shows and getting offers for more,” Spreer says.

But the band acknowledges the risk of stretching themselves thin. “We were desperate to play, and ultimately it was super fun, but the flip side of that maybe is that having five shows in a week, it splits your crowd into fifths. But it’s also cool in that a whole new group of people get to hear us each time,” Heard explains.

“Joel Coon, who plays drums in the band, recorded us and we did the whole EP in just three days,” Spreer explains. “He added a lot of things on the EP as a producer, just went in and worked his magic adding keys and experimental guitar tracks. And for a DIY home recording, what he made sounded really good... we feel so lucky to be able to have him be a part of it.”

Evan Heard explains the title, and future plans to record: “We have a lot of different sounding songs, and I think they’re all kind of unified by this idea. We named the EP ‘Lighter and Brighter’ because that fits the songs we picked for this release. We have some more dirty garage kind of songs, but we left them off for more of the shoegazey textural kind of stuff. We’re talking about doing a follow-up EP that’s more of the gritty garagey kind of stuff.”

“Someone said we have a bit of classic rock in our sound, and that brought on the idea that we should start looking the part like Led Zeppelin, you know-- spandex, grow our hair out, show a little bulge,” jokes Spreer.

“I’ve sometimes jokingly been calling our music ADHD rock,” says Heard, “because I feel like there’s so much great stuff out there and I want to give so many different ideas a chance.”

The band will have plenty of opportunity to explore those ideas and sounds on record, but it’s in a live setting that Psychic Heat truly stand out. Singer Evan Heard seems almost possessed with energy and enthusiasm as he flails off-stage and into the audience during at least one song every set.

“We try to give 100 percent as far as the energy factor, cause there’s plenty of amazing bands that you see where there’s not much movement, that it’s much more fun when you see a band that’s actually running around and tearing it up,” says Heard, the free-spirited frontman of this psych-rock outfit.

“Honestly, what drives it is just the energy that we’ve gotten from peoples’ reactions, and that’s really what makes it worth doing,” Spreer says. “We’re starting our acrobatic training,” he adds, jokingly. “We have ropes and I’m gonna do a striptease from the ropes while playing, like upside down.”

You can catch Psychic Heat’s sweeping energy as they open for JabberJosh and Cricket Wand tonight at The Replay Lounge, Thursday August 8th.