A resident of Eudora, Kan., for only a month and few days now, Hawaii-born-and-raised singer-songwriter Kawehi has already successfully funded a Kickstarter for a U.S. tour, declared a favorite townie bar, and recorded two videos in her new workspace and temporary home: Black Lodge Recording Studio. 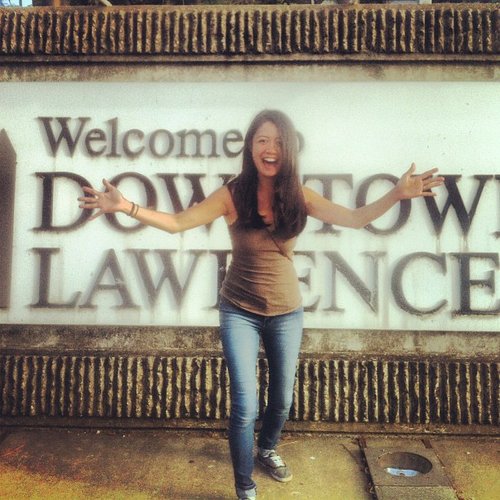 "Without ever seeing it, without ever being here, I just said, OK, let’s move," says Kawehi. "So we picked up and moved and we’ve been here for a month now." Photo from Kawehi's Facebook page. by Jessica Sain-Baird

Living in Los Angeles for the past 10 years with her husband, Paul (“We are a team... he produces the EPs; he does all the videos.”), the two recently relocated to Kansas to focus entirely on music and touring the country — all from Eudora, a city Kawehi had never visited until the day she moved there.

“It was definitely an experience to see where you’re gonna live for a really long time, if not the rest of your life,” the 30-year-old musician says. “I was actually pleasantly surprised. There’s actual restaurants there! It’s very quaint. I really love the trees here. It’s so green. It’s a lot of things L.A. isn’t.”

Ending up in Kansas

Kawehi moved to Los Angeles at 20 for a short time to play with a band organized by her record label.

“I quit the band because it wasn’t really something I wanted to do,” she says. After a short time back in Hawaii, Kawehi moved back to L.A. to pursue her solo music career while juggling a day job.

In April 2012, Kawehi struck unbelievable luck when her recording of Britney Spears’ “Criminal” with only a loop pedal was a featured Staff Pick on Vimeo.

Finding it impossible to create the music she wanted while holding down a full-time job, Kawehi and her husband quit their jobs.

“I started busking, doing college shows, doing anything to get by,” she says. “You can’t get by in Los Angeles. You have to have a job. It definitely takes its toll. We were both ready [to move].”

Paul found Black Lodge “on accident” and was swayed after visiting in person.

“We’re like, are you kidding? We have to do it!” Kawehi says. “Move across the country? I don’t know, but there’s this huge pile of plusses.”

“You have a city with lots of music. I was amazed walking down Mass. Street seeing all the venues that have music. And people actually watching!” When not watching music, Kawehi has already found a favorite local bar to frequent: Red Lyon Tavern.

About a year and a half ago, Kawehi took up looping — recording sections of songs live and playing them back on top of each other.

“I was sick and tired of going up [at a show] with just a guitar. I thought it was boring,” she says. “So I picked up the [looping] pedal.”

“Half of my songs will be looping,” she says about her typical sets. “I record everything live. Right now I have a keyboard, toy electric guitar, acoustic and ukulele.”

“If somebody does a song, they do it their way, it sounds fantastic,” she says. “Why do it the same?”

Taking cover requests is a popular bonus Kawehi offers to Kickstarter backers — but there are a few songs she was eager to cover of her own volition.

“I really wanted to do the Gotye song. I know it’s overplayed. It’s still a good song. I was used to hearing Katy Perry and Taylor Swift on the radio, and I was tired of this stuff in my ears. But when I heard this song, I was like, ‘What!’ I remember exactly where I was and thought it was an amazing song. I knew I had to do that. That was definitely a must-cover.”

Settling in at Black Lodge

The Eudora studio Kawehi and Paul now call home, Black Lodge, was owned by Ed Rose and Ryan and Rob Pope, and has been on the market for a few years. Bands including Motion City Soundtrack and Casket Lottery have recorded there.

Kawehi and Paul have recorded two videos in the studio since moving in, including a Nine Inch Nails cover of “Closer.”

But aside from recording and filming music, they want to open up the studio space to anyone.

“One of the big things that Paul and I talked about is... having house concerts and opening up to the public,” she says. “I do a lot of live shows, too, for my [Kickstarter] backers on the Internet… so we were talking about setting up a live streaming show with an audience. We have all that space. That’s definitely the next thing we wanna make sure we do. That’s gonna happen when we’re finally home.”

Before then, Kawehi is headed on a U.S. tour, but not before beginning to play in Lawrence — she is performing Saturday at Frank’s North Star Tavern.

“I was skeptical [about Kansas] because I’ve never been here before. But I love it,” she says. “I can sleep. I can feel at ease. I definitely really enjoy it out here. I don’t miss California at all. I miss my friends, I miss my family, but everything else... I’m here to stay. We’re definitely here to stay.”