Josh Berwanger, lead singer of the beloved late '90s-early 2000s Lawrence band The Anniversary, has remained active in the local music scene since the "All Things Ordinary" band's sudden breakup nearly a decade ago.

He first created The Only Children, a country-rock band that released two albums, in 2004 and 2007. And in the past few years, he's been working with Michael Hutcherson, original drummer for The Anniversary, on "Strange Stains," which is full of pop songs touching on themes such as loneliness and change. The band released the album Oct. 1. 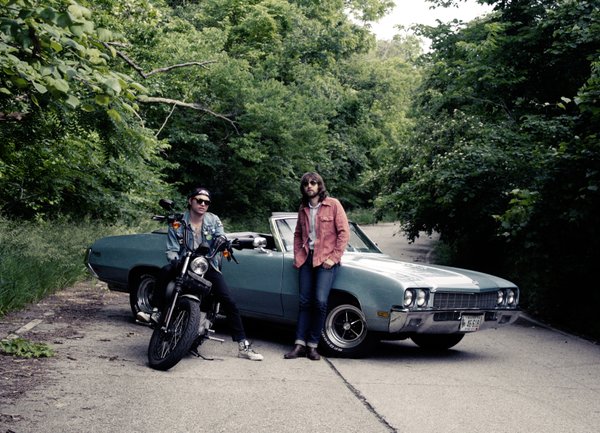 Longtime Lawrence musicians Josh Berwanger and Michael Hutcherson are launching a tour this month to promote their new album. Photo by Rebecca Armstrong. by Jessica Sain-Baird

"Strange Stains" is available on vinyl and CD at the Good Land Records website (stream on Spotify here). The band is launching a tour this week, and you can catch them locally at the "Strange Stains" release show on Oct. 31 at the Record Bar, or Nov. 1 at the Replay Lounge.

"It's an honest and truly sincere rock and roll record," Berwanger says. "It's a record that speaks about love, heartbreak, idiots, and continuing to pursue what you love to do, no matter how hard that shit is."