Minus the Bear Factor More Acoustics Into the Equation 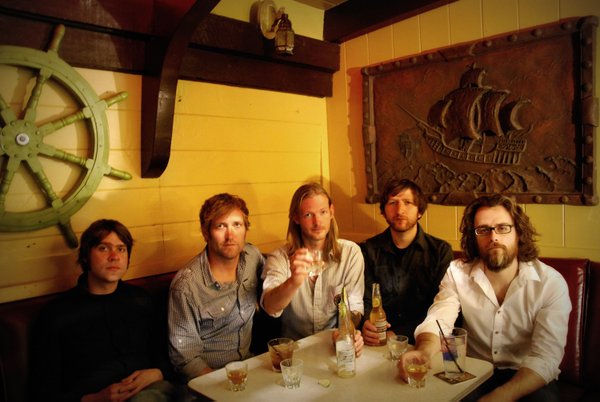 Minus the Bear is going back to the drawing board, and they're taking an eraser to the perfunctory trappings of electric instrumentation and modern production frills.

Now 12 years into their musical career, the Seattle band has just self-released a new full-length LP, simply titled Acoustics II, which showcases unplugged interpretations and "re-imaginings" of songs from each of the band’s five previous studio albums and features two brand new unreleased songs – “Riddles” and “The Storm.”

But why the five-year wait? "It's definitely the right timing," says bassist Cory Murchy. "We've been kicking around the idea since we did the first one." He also commented on the album's retrospective nature, adding, "It's nice to kind of dust those old songs off and revisit them, doing them acoustically... At this point we have quite a few to pick from."

By no means a greatest hits collection, Acoustics II in many ways serves as an addendum to the band's 2008 Acoustics EP. Like it's spiritual predecessor, the album was recorded in-house by the band's long-time producer (and former MTB keyboardist) Matt Bayles at his Red Room Recording studio in Seattle, and released via the band's own label, Tigre Blanco Records.

Minus the Bear also chose to put a modern spin on the self-release business model this time around. Whereas in the past this type of record would often only see the light of day as a fan-club mailing lists, the band instead launched a crowd-sourcing campaign through the web site PledgeMusic.com, allowing supporters to get the album a week before its release and receive exclusive and rare offerings along with their purchase.

The mutual relationship of fan support reflects the bands values.

"We’ve had a real gradual, slow and organic build with our fan-base," says Murchy. "It can seem kind of hard to see it from where we are now, but it's still amazing to step out on stage and just see it in people’s faces every single show."

As for the music, Acoustics II starts with "Riddles," one of the two previously-unreleased tracks, and one that sounds more like the free-love festival-folk of CSNY and The Grateful Dead than the nuanced electro-rock and post-emo guitar-anthems the band is known for. Thankfully the track-list quickly detours back into the archives, following the uneven opener with intriguing arrangements of "The Game Needed Me", the opening track off the band's second album Menos El Oso, and fan-favorite "Absinthe Party at the Fly Honey Warehouse," off their debut Highly Refined Pirates. Throughout its tour of the band's catalog, Acoustics II leans pretty heavily in the direction of high school mix-tapes and Starbucks' programmed playlists. But then again, what else should really be expected from the album's unassuming title and cover-art (a painted depiction of either fireflies, fireworks, or perhaps an impending forest fire, set against the night sky).

While some fans may see the stripped-down nature of the new recordings as a subtraction problem, they can take comfort in knowing the band doesn't intend to carry the difference to the stage. The band will perform in full, plugged-in form, complete with rows of delay pedals and electronic effects, while still debuting the new acoustic arrangements in a separate portion of their live set. Whichever your preference, both modes are sure to display the virtuosic playing and insightful songwriting that has become synonymous with the name Minus the Bear.

Perhaps experimenting with the formula of their own material is just another way for the band's members to mark the passage of time. "Tomorrow’s our anniversary of the first show we ever played," Cory Murchy said. "We've grown a lot as people, as musicians, and as friends. There’s been a lot of changes, but we've gone through all the ups and downs together."

Minus the Bear headlines at The Granada this Friday, Sept. 20, supported by openers Tera Melos and The New Trust. Doors are at 7:30 p.m. and the show begins at 8:30 p.m. Tickets are $20 in advance and can be purchased from the event's Facebook page.