If you’ve followed the Lawrence music scene over the years, you’ve likely heard of Justin Roelofs. He was a guitar player for The Anniversary and released a solo experimental record under the name White Flight. 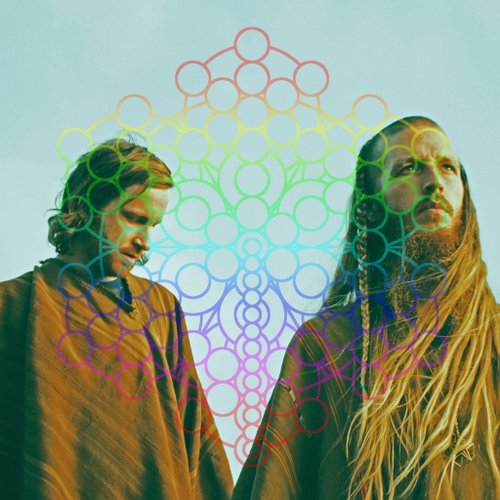 Evan Mast and Justin Roelofs will be releasing a new album this year under the name ABUELA. Photo by Neil Krug. by Jessica Sain-Baird

Now, after several years and a successful Kickstarter, Roelofs is preparing for the release of the highly anticipated album for his newest project, ABUELA, a new collaboration with Evan Mast, member and producer of Ratatat. Roelofs said ABUELA is a highly visual project, incorporating “strong geometrical and metaphysical elements... something from the future past.”

ABUELA’s debut single, “True Colors,” will be released Feb. 4 via the label Canvasback, with a full album expected this year.

Jessica Sain-Baird: How did you and Evan meet and what's inspired you to work together?

Justin Roelofs: Evan and I met years ago, when he was in the first incarnation of Ratatat called Cherry. We've kept in touch ever since, collaborating some here and there. But in 2012, we went to Peru and started recording ABUELA there. So now the collaboration has gone to a very deep level, also working with video and film. It's become a project that we both have a lot of heart invested to and we seem to work amazingly as a team.

JS: Where are you based now? Do you ever return to Kansas, and when was the last time you lived here?

JR: I am mostly based in Hawaii and southern California these days, but honestly I still travel around a lot. I make it back to Kansas usually every other year for a visit with all my family and friends there. I still love Lawrence and the people. I try to make the visits last a month or so when I do come in town.

JS: What was your recording time in Peru like, and from what did you find inspiration there?

JR: Peru, the Sacred Valley particularly, was where we began to record the entire project. I spent a few months living high up in hills behind a tiny village, all with a studio setup that fits in a single suitcase. We were extremely limited with our tools and instrument selection, which kept the initial session focused and clean. Most of this record was accomplished with this same minimalist toolkit and ideology. Since I move around a lot, my studio has to be mobile, so that dictates so much of the sounds I can create.

But Peru was the perfect place to just be in the vibration and let the music move through us. We were in a very modest, absolutely raw and beautiful setting, the studio opening right into the mountains. But it was a journey for sure, with all sorts of various challenges — the exact opposite of a cozy studio experience. We have a similar plan for the next record we will make later this year — to go somewhere exotic and start sessions that will continue in many other places as well.

Since Evan and I are both heavily active producers right now, the recording never really stops for either of us, wherever we are. It’s just nice to be in the same room at certain points, and we only want to do that in wholly inspiring settings.

JS: When can we expect an album from ABUELA? What inspired the name?

JR: You can expect an ABUELA album in early to mid 2014 for certain. We recorded in Peru, Hawaii, southern California, and Evan is based in NYC. We've gotten in the same room a handful of times throughout the project, but much of what we're doing is accomplished with each of us working alone and emailing each other mixes. We have a completed record now that is just still getting tweaked.

As far as the ABUELA name, we were simply trying to think of the hippest, most timely band name we could think of in this glorious internet age. Clearly nothing is more relevant in 2014 than calling your band GRANDMA.

JS: What instruments are you incorporating into the album?

JR: We used a variety of old acoustic instruments, including lots of flutes, lots of charango, sort of like a 10-stringed Andean ukulele, and a ton of vocals. This was mixed within a pallet of super modern instruments, like VST synthesizers and all sorts of extremely current production techniques.

All along for this album I have been pushing to make music from the ancient future. It has also made it pretty hard for people to pin ABUELA down into a specific genre. We've gone with an ‘all genres at once’ approach, nothing is really off limits, which gives us so much freedom in the production process. And I love how there are plenty of other fearless producers these days also blending the lines between hip-hop, electronic, dance, indie, folk, etc. I think it's such an exciting time to be producing music as all the rules and taboos have started to get thrown out the window, especially by the younger generation.