Members of the band OILS are three songs into a practice session in the upstairs of SeedCo Studios, and three of them — Andrew Frederick, Chris Luxem and James Thomblison — have already made their way to the floor. 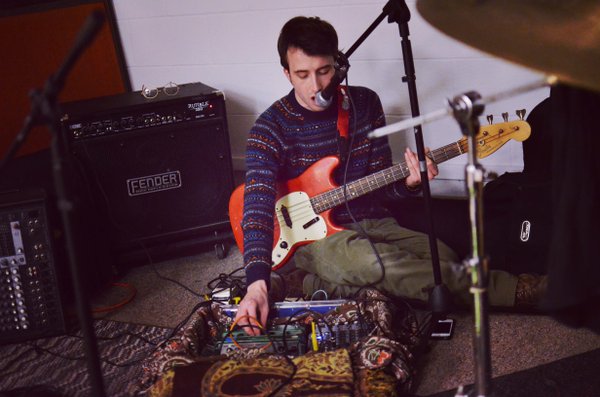 Chris Luxem practices with OILS at SeedCo Studios on Feb. 26. by Jessica Sain-Baird

Sitting cross-legged with eyes closed, Frederick switches between his guitar and reverbed vocals. Luxem perfects the pedals and mixers at his feet. Thomblison, the group’s newest member, looks to his bandmates for cues. Drummer Mark Osman is the only member standing as he plays. Taryn Miller, who recently signed with Domino Records for her solo project, Your Friend, will be joining later in the evening.

The breadth of experience and collaboration between all five OILS members allows for a particularly entrancing textural sound — many songs easily transitioning into jam sessions. It’s not unusual to find any given combination of OILS members performing together on any given night in a multitude of other local projects, including CS Luxem, which has a nearly identical lineup.

“Because we’ve all been collaborating so much, we’re at a point where the boundaries are kind of blurred,” Frederick says. “That’s really exciting because we’re all just going to put a bunch of energy into it and see what happens. We naturally slip into more recognizable genres now because we’ve built a vocabulary to do so.”

Although the lineup has shifted from when OILS first came on the scene in 2010, Frederick and Osman are founding members. OILS released a cassette tape last year and now they have even bigger things on the horizon in 2014: a 7-inch of new material for Replay Records, and a performance at Love Garden’s 24th anniversary celebration in May. 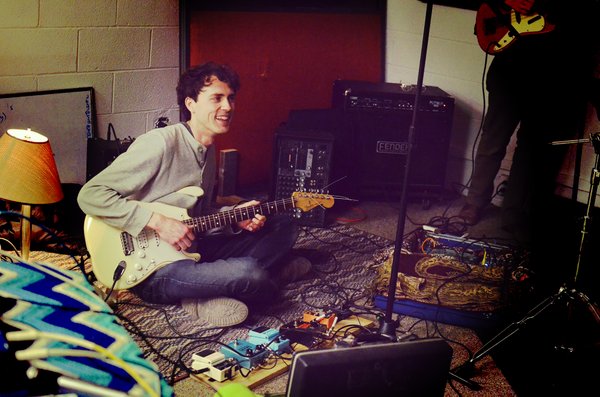 Andrew Frederick practices with OILS at SeedCo Studios on Feb. 26. by Jessica Sain-Baird

In the cozy and cold home base of SeedCo Studios, which hosts open spaces for musicians, artists and other creatives, OILS has found a revival of sorts for local creativity and partnership.

“I was always looking for ways to combine visual artists with sound artists,” Luxem says. Now that’s made more possible with their recording studio in earshot of artists’ studios, and many local artists, such as Jason Barr, creating original artwork for OILS’ shows and recordings. “Printmakers and musicians have always gone hand-in-hand. They’ve helped make posters forever. It’s an extra piece of merchandise at your show.”

With a busy spring ahead of them, though, it’s the upcoming performances that stand out. “We’ve just been recording so much that we have all these tracks,” Frederick says. “We’re really stoked about playing live for now. That’s the biggest thing.”