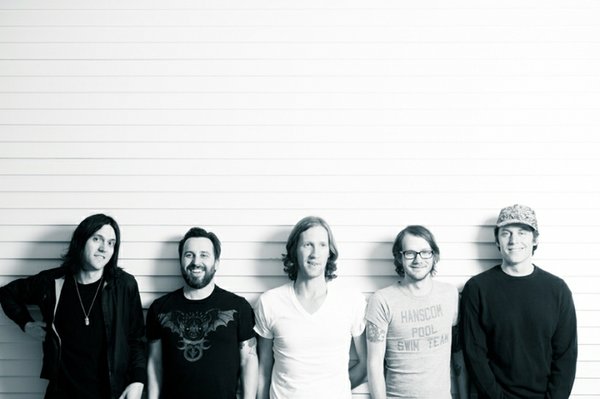 Call it a comeback if you must, just don’t call it a side-project… Omaha emo-punk stalwarts Desaparecidos will take the stage at Liberty Hall tonight, bringing their raucous political anthems to devoted fans and new converts alike. Fronted by Conor Oberst (Bright Eyes, Mystic Valley Band), the group plays a harder and more boisterous brand of rock than many would associate with the folk singer, more akin to Saddle Creek labelmates Cursive or the political punk of Against Me! They released one album, Read Music/Speak Spanish, with limited touring in support of it before disbanding in 2002.

A decade later, Desaparecidos has returned, reinvigorated by a new political landscape and the release of their third 7-inch single pairing of new songs (“Te Amo Camila Vallejo” and “The Underground Man”) since reuniting last year. I spoke with the band’s guitarist and Denver Dalley (who also plays backup in Har Mar Superstar between Desaparecidos activity) about the new song’s message and returning to the road.

“I’m particularly excited because our initial run was so brief as far as touring, and now it feels like we really get to do it from a place of having more experience,” says Dalley. “Its exciting to actually feel like a ‘real’ band now, in a lot of ways for the first time.”

I brought up the more overtly political nature of the band’s new material-- their last single contained songs titled “The Left is Right” (with its ‘Occupy’ Movement declarations of the 99 percent) and “Anonymous,” which pays homage to the controversial ‘hack-tivist’ group.

“We’ve got plenty of fuel for the fire, and wrote these new songs to address many of those issues,” says Dalley. “At the same time, I don’t think it’s like this ‘war’ that’s going on, just more a friendly debate… I’ve always been into respecting other people’s views and finding common ground.”

Such inclusive values reflect the band’s Midwestern roots. “There’s this genuine niceness that comes from the Midwest,” Dalley attests, “People hold to ‘love thy neighbor’ above most else.” Even after going their mostly separate ways the group stayed connected to their Omaha home-base. “Connor and I still have houses there, but primarily live in New York,” says Dalley. “But we’re still an Omaha band; that’s still where we hang out together and that’s where our band practice room is.”

Politics aside, what really sets Desaparecidos apart from many modern rock bands is their strict adherence to releasing their music independently, even in the seemingly antiquated form of 7-inch singles.

“I don’t think there’s any rhyme or reason, or plan of attack.” says Dalley on the choice of distribution. “We as a band aren’t the most business savvy.”

The matter is one bands face whether releasing albums or singles in the digital era. “It used to be bands would work on songs, get them ready to record, and then carefully put together a release,” cites Dalley, “Now a band plays new songs live once and they’re all over YouTube anyway. So this was just a way to release them more instantly to fans, and showcase some new material we’ve been working on.”

“The music industry has become this really dark place where you watch labels crash and burn, but people are still adapting, like Jurassic Park,” Dalley adds. “Labels used to bring out bands, support and ‘grow’ them, but now even major label acts are forced to think and operate more independently.”

All industry pitfalls considered, I asked Dalley if there are plans for a forthcoming full-length, or what else fans could expect from the reunited Desaparecidos. He offered an optimistic, if somewhat cryptic response.

“I think we’d all like to see that, but I can’t tell you what the future holds.” He explains further, “We’re all kind of non-committal, or even afraid of commitment, so for now we’re just taking it one 7-inch at a time.”

Tonight's show at Liberty Hall is all ages, and starts at 8 p.m. with doors open at 7 p.m. Brooklyn punk rockers The So So Glos are opening, and tickets can be purchased through the Liberty Hall Box Office, all Ticketmaster Outlets and at Ticketmaster.com. For more information, visit the Facebook Event Page.