Farmer's Ball is KU student-run radio station KJHK's annual battle of the bands — a competition held since 1994 that has crowned winners ranging from rapper Stik Figa to funk band the Will Nots. This past Saturday, eight bands performed and more than 250 audience members voted at the Bottleneck to choose the four finalists below, who will compete in the finals this Saturday.

With ties to local band Quiet Corral, Brain Food aims to bridge "the gap between electronic and song-based music."

Spirit is the Spirit

This five-piece rock band has a trippy music video for their song "Pillows" and an energetic stage presence that usually sparks a dancing crowd.

One woman and her guitar — though she'll play this weekend with a drummer, second guitarist and keyboardist. Y(our) Fri(end) has played everywhere from Middle of the Map Fest to SeedCo Studios.

This is the final article in a series looking back at past winners of KJHK Farmer's Ball, retelling the artists' memories of winning and their musical endeavors since. This year's Farmer's Ball will take place April 20 and 27 at the Bottleneck.

In the words of a Panda Circus fan, according to lead singer Quinton Cheney: This band sounds as "if They Might Be Giants were a Doors cover band."

And according to Panda Circus' Facebook page: "if Elvis Costello, Ben Folds and Frank Black got stuck paying off their debts in a middle-of-nowhere bar band."

The Lawrence band formed in 2007 and went on to win KJHK's annual battle of the bands, Farmer's Ball, four years later. Now, they're finishing their second album and preparing to play their final show before they go on hibernation.

Of the lineup — Travis Arey, Ben Barthell, Quinton Cheney, Caroline Lohrenz, Erin Zingré — three of them will be working on separate music projects. Arey, Barthell, and Cheney have started a punk project called Something and the Whatevers; Arey also plays with Stiff Middle Fingers.

See Panda Circus at its final show May 21 at the Bottleneck, with Kansas City band Not a Planet.

Posted by Jessica Sain-Baird on November 28, 2012 at midnight

Specializing in vinyl, DJ Modrey Hepburn brings the oldies to KJHK and the Replay Lounge 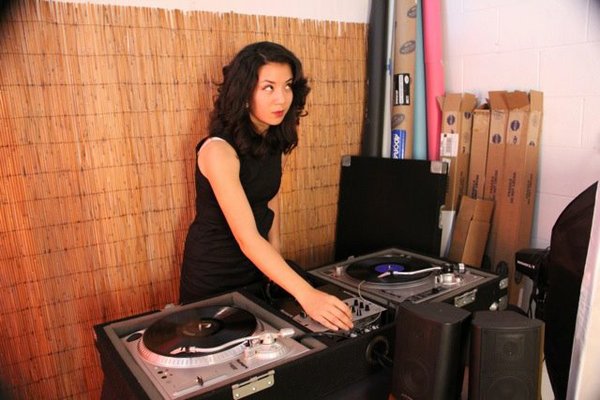 Emily Scholle’s weekly show on KJHK, “Vintage Vinyl,” truly lives up to its name. Scholle, also known as DJ Modrey Hepburn, is the only KJHK DJ who strictly plays records on the radio, though others may play vinyl on occasion. “I really love records,” she said. “I really love how they sound.”

Tune into her show or see her live and you’ll hear songs from the ‘50s through the ‘80s.

“I started playing 1950s. That’s where it all started out,” she said. “I love oldies, doo wop, and rockabilly. All those sappy songs no one listens to anymore. I think my main focus would be ‘50s and ‘60s—rock, British invasion stuff. Those are my two main genres I stick with.”

Her interest in records began when she started DJing for KJHK in summer 2011. At first, she didn’t even own a record player—now, she’s acquired records from Chicago, Los Angeles, and other places when traveling.

“It’s so hard to find [records] that are in good condition,” she said. “So many people bought them and played the hell out of them.”

She said Half Price Books is her local location of choice when it comes to an affordable, wide selection of records, but she also shops at Love Garden. Some of her proudest finds are a few Beatles 45s.

Scholle is a senior at KU studying music education. She said the emphasis in the program on transcribing music and being able to identify music keys has helped her—perhaps subconsciously—make smart decisions on what songs to play alongside each other.

Listen to DJ Modrey Hepburn on Wednesday nights on KJHK from 8-10 p.m., or see her live at the Replay Lounge this Friday for $3.

One of the simplest and best ways to stay plugged into Lawrence’s local music scene while at home is by tuning into KJHK, KU’s student-run radio station. I’ve always been impressed by the work of student DJs at KJHK, and I especially think their four local-themed shows this semester are worth checking out. I asked a host from each show to answer a few quick questions about their shows and who they’ve been featuring.

Don’t forget to tune in!

Describe the show in one sentence: "It's exactly like it sounds: a show focused on in-studio artist performances and interviews."

A few artists you've played host to on your show recently: "DJ vs. Drums; HRVRD; The Empty Spaces."

Why people should tune in: "It's your own, private concert—you hear live music instead of pre-recorded tracks."

Describe the show in one sentence: "Plow the Fields is a local radio show hosted by me, DJ Dirty Shirley, and I play the latest and greatest in local music from Lawrence to KC and beyond."

A few artists you've played on your show recently: "The Harvey Girls; Appleseed Cast; Cloud Dog; Cowboy Indian Bear; The Empty Spaces." [Writer’s note: Ebony Tusks and Pale Hearts will also be playing in-studio performances at the show over the next couple of weeks.]

Why people should tune in: "It's important to keep an ear out for local acts—we have some quality music here in Lawrence that's current and relative to what it means to live here. When you listen to local music, you're learning more about the immediate culture you live in. Plus, it's a good time. I do my best to send out good vibes on the air."

Describe the show in one sentence: "KC Jazz Connection explores the Kansas City jazz tradition from its beginnings in the 1920s to the latest releases today."

Why people should tune in: "Jazz is something as quintessential to the cultural tradition of KC as barbecue. I want to help preserve that tradition and turn on more people to something that's only a 40-minute drive from Lawrence."

Describe the show in one sentence: "I-70 Independent is a show that highlights the greater Lawrence and Kansas City area hip-hop that has a unique sound that is different from the more popular West and East Coast hip-hop, but is catchy and upbeat."

Why people should tune in: "Because not all hip-hop is the stereotypical stuff you hear on the Top 40 charts. The Lawrence area has a very talented hip-hop scene that features artists that not only write and produce their own songs, but they also sing about relevant and important things that are easy to relate to and enjoyable to listen to."