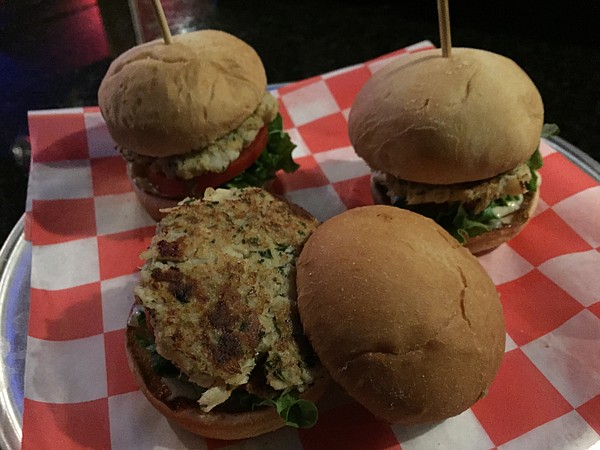 It’s not every bar that prides itself on not owning a fryer. But R Bar, which launched its new — and first-ever — menu of classic tavern eats with a fresh, modern twist about a month ago, isn’t every bar.

The unassuming location adjacent to a non-operating gas station serves more conventional stuff like chicken wings and a “classic American” hamburger slider, but the dish that’s drawn the most attention might be the Maryland crab cake sliders.

Inspired by chef and R Bar co-owner Brian Reeves’ stint in The Old Line State (yes, that’s apparently the official nickname of Maryland), the patties are made with crab meat and “just enough other stuff to hold them together,” R Bar’s menu teases, then grilled — not fried — in lemon butter.

Try it with: R Bar doesn't serve typical sides (no fryer means no french fries, pub chips or the like) but bartender Haley Martin likes her crab cakes with veggie skewers — they pretty much act as a side at R Bar, she says.

Also on the menu: Wings (available in buffalo, "facemelters!" and naked), a few more sliders (Southwest Shredded Chicken and Asian Pulled Pork), and the aforementioned skewers, which also include the intriguing bacon and cinnamon apple.