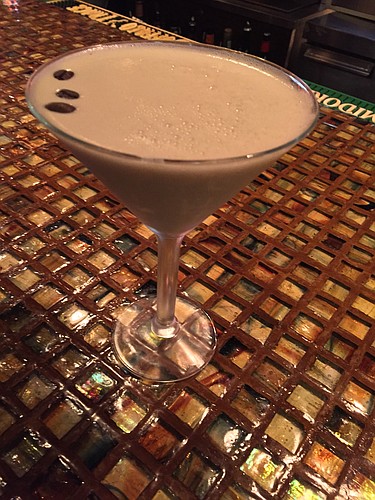 Nov. 30 marks what would have been the 180th birthday of beloved American writer Mark Twain. Given the humorist’s boozy reputation, what better way to celebrate his life and works than with Genovese’s Twain-inspired cocktail?

Better known by his folksy pen name, Samuel Clemens was apparently a huge fan of whiskey, at one point declaring, “Too much of anything is bad, but too much good whiskey is barely enough.” (Speaking from personal experience, I can say there is such a thing as too much whiskey, but who am I to argue with genius?)

There’s plenty of it in Genovese’s rich, frothy martini, which also contains coffee liqueur, Irish cream and a sprinkling of coffee beans. One can only imagine the spectacular milk mustache this drink would create on Twain’s facial hair; picturing the solidly Midwestern dude swilling a martini glass garnished with coffee beans requires a little more imagination.

Twain was once quoted as saying coffee induces wit — though knocking back a few of his namesake cocktails should also do the trick, if you catch my drift.

Where it's served: Genovese, 941 Massachusetts St.

Other libations at this location: Plenty of classic cocktails (bloody marys, Moscow mules, mimosas and the like), plus more than 20 martinis, from The Genovese (this signature drink features gin, Genovese basil and fresh lime juice) to refreshing thirst-quenchers like the Blood Orange and Cucumber.

— Drink up. Stay classy. Don’t forget to tip your bartender. And let us know if you want to suggest a libation for this feature — email jhlavacek@ljworld.com or Tweet her at Twitter.com/hlavacekjoanna. Cheers.