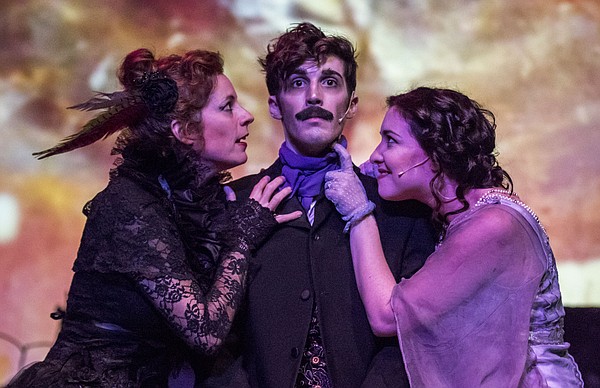 Cast members, from left, Kirsten Paludan, Devin Burns and Marah Melvin run through a scene during a dress rehearsal for "Midnight Visit to the Grave of Poe: A Grotesque Arabesque" on Tuesday, Oct. 20, 2015 at the Lawrence Arts Center, 940 New Hampshire St. by John Young

Once every year for seven decades, a shadowy figure dressed in black paid tribute to Edgar Allan Poe by visiting the author’s grave in Baltimore.

This mysterious ritual — which involved a toast of cognac and a gift of three roses left at Poe’s grave — occurred in the wee hours of the morning every Jan. 17 from 1949 until the day of Poe’s bicentennial in 2009.

The “Poe Toaster,” as he (or possibly she, I guess?) is affectionately known, could still be out there, for all we know.

In fact, Ric Averill even contemplated inviting the unnamed Poe fanatic to his newest production at the Lawrence Arts Center, though even the longtime artistic director of performing arts admits the plan may be a long shot.

That’s too bad, because Averill’s original creation, “Midnight Visit to the Grave of Poe: A Grotesque Arabesque” is, as you might’ve guessed from the title, inspired by the Poe Toaster’s ritual. 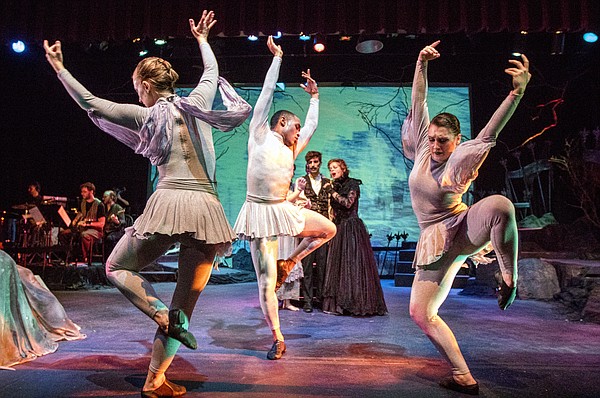 Dancers, from left, Eleanor Goudie Averill, William Roberson and Nina Rose Wardian run through a scene during a dress rehearsal for the upcoming production of "Midnight Visit to the Grave of Poe: A Grotesque Arabesque" on Tuesday, Oct. 20, 2015 at the Lawrence Arts Center, 940 New Hampshire Street. by John Young

Averill describes “Midnight Visit,” which opened last week at the Lawrence Arts Center, as a “total operaesque experience of the life and works” of Edgar Allan Poe.

(Oh, you mean Poe had issues beyond the fact that he married his 13-year-old cousin?)

“The idea I had as an artist was to see if the Poe Toaster came to the grave one night and instead of just laying down the roses, he actually encounters the ghost of Poe,” says Averill, who wrote the script and the music (it’s got an “earthy, contemporary sound” that mixes traditional rock instrumentation with a Steinway piano, synthesizer and cello) for the show. 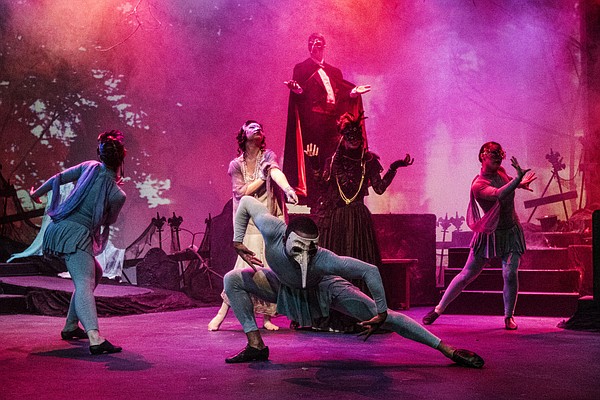 Cast members run through a scene during a dress rehearsal for "Midnight Visit to the Grave of Poe: A Grotesque Arabesque" on Tuesday, Oct. 20, 2015, at the Lawrence Arts Center, 940 New Hampshire St. by John Young

“Midnight Visit” is told in six movements, five of which are based on famous works by Poe: “Morella,” “The Tell-Tale Heart,” “The Masque of the Red Death,” “Eleonora” and “Annabel Lee.”

Running through each is “this sense of loss and grief” triggered by the death of Poe’s mother, whom he lost at the age of 3 to tuberculosis.

Elizabeth Arnold Hopkins Poe (she and Edgar’s father, David Poe, were both actors) died young, at 23. So too did Poe’s cousin-wife Virginia Clemm, who also succumbed to tuberculosis at 24.

Both women — or some fictionalized, abstract versions of them — appear as ghosts in “Midnight Visit” accompanied by modern dancers and Averill’s five-piece rock/classical band.

“There’s this theme of this beautiful mother that echoes through Poe’s work,” Averill says. “It’s this tragic theme of using the young woman who comes back from death to haunt (the protagonist) and to say, ‘You should be loyal to me and never love another.’”

By the end of the musical, the midnight visitor leaves Poe’s grave with a greater understanding of the man and his stories.

The show moves fast, Averill says, and with the constantly moving backdrop of creepy digital images created by artists Clare Doveton and Jessica Kolokol, “there’s always something going on”

As for the mysterious circumstances surrounding Poe’s death, no one knows for certain. The author’s alcoholism and opium addiction probably took a toll, Averill guesses, but he can’t be sure.

“He was his own worst enemy,” Averill says of Poe, but, “What always fascinated me about Poe is just the beauty that can come out of that pain and that agony. It’s just astounding.”

"Midnight Visit to the Grave of Poe: A Grotesque Arabesque" will be performed at 7:30 p.m. Thursday, Friday and Saturday, aka Halloween (when guests are invited to wear their "best gothic Halloween costumes"), at the Lawrence Arts Center, 940 New Hampshire St.

Tickets range from $10 to $25, and can be purchased at the box office, 940 New Hampshire St., or online at lawrenceartscenter.org.

"Midnight Visit," per Averill's description, is geared more toward adults and "sophisticated teens" than kiddos.

The Lawrence Arts Center's other spooky yet family-friendly production, "The Boy Who Left Home to Find out About the Shivers," also runs through Halloween. Tickets range from $8 to $12.