In our second installment of 10 Questions, Taco Zone co-owner, general manager and one-time rocker Brad Shanks (formerly of the indie outfit Blood on the Wall) chats about life after Replay Lounge, the surprising popularity of the tongue taco, and brotherly (in-law) love.

In this case, we're willing to give a pass on what counts as "10" and "questions." 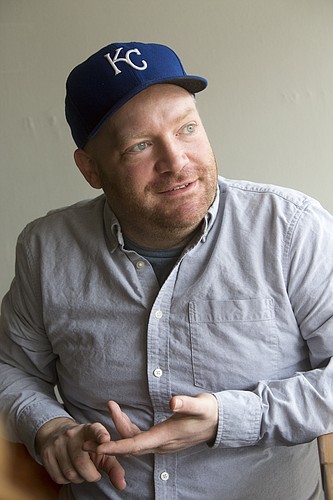 Brad Shanks, co-owner and general manager of Taco Zone at 13 E. Eighth St., talks about his business and some of his favorite Lawrence eateries. by Richard Gwin

Taco Zone started out as a food stand at the Replay Lounge, which has a pretty raucous vibe, as anyone who’s been there knows. Do you ever miss that dive-bar atmosphere?

I love that place and a lot of my friends work there, and I worked there as a bartender for a long time as well. I do miss being there. It’s a lot of fun — you know, on weekends, there’d be like, 5, 6, 700 people going in through that door, so it was always pretty wild. And it was a really great way for us to get our name out. People would show up to see a show and have some drinks, and then they’d see us in the corner and they’d try some tacos, and they’d keep coming back. So it worked out really well.

Is that how you got your start in the service industry, as a bartender at Replay?

I’ve bartended at other places, too. But that was my last job before I started Taco Zone. I’ve also worked at 715 as a bartender. So, two different places. (laughs)

With totally different ambiances. But bartending is bartending, right? Did you ever have any experiences as a bartender where people would just pour their hearts out to you?

A great bartender is a good listener. That didn’t happen that often, but there were people who would come in and want to chat. Usually, pretty interesting people (tell) interesting stories. I was always there to listen.

You tout yourself on the Taco Zone website as Lawrence’s first Southern California-style taqueria...

That was our inspiration for Taco Zone — Southern California-style taquerias. My brother-in-law (chef and co-owner Brian Ayers) and my sister (Courtney Shanks), who’s also a partner in Taco Zone, actually have this really great story. They reconnected in Los Angeles and started dating again after dating years and years ago. They ended up moving in together and getting married, and I’d go out to visit them all the time. They’d take me to these amazing taquerias all around Southern California. It was my favorite thing to do. So, when they decided to move back to the area, Courtney was asking what Lawrence needed or didn’t have, and I was like, “One of those Southern California-style taquerias would be amazing. We don’t have one of those.” This is our version of it, basically.

Compared to what people around here might be used to as far as Mexican restaurants in the Midwest, some of your menu is kind of exotic — your oxtail posole, I know, has done really well. Do you think people’s tastes are evolving?

I think so. Maybe there’s more opportunity in Lawrence than there used to be a while back, I guess. Well, maybe that’s not the best way to explain it. I would just say people are more open to trying out new things as they find out about them, really. It’s kind of like, if you don’t know about our guisado style of braising meats, why would you stop eating some other kind of Mexican food? I think people in Lawrence are very open-minded to new food opportunities, and it’s just growing and growing. I guess that answers your question. I don’t know, probably not. I drank a lot of coffee today. (laughs)

Don’t worry about it. Could you explain guisado for people who don’t know?

Guisado just means "to stew" or slowly braise. Brian’s passion is slow-braising meats, so it translated really well to the guisado style, which is really just slow-cooking meat for hours and hours and introducing new flavors and in the end you come up with our different kinds of fillings. It’s just a really great way to add a lot of flavor to meats that aren’t necessarily your typical thing. Like, we do a lot of lengua with roasted pepper and onions…

Yeah, it’s tongue. It’s not your typical thing you’d find on just any menu. But the guisado style of just slowly cooking it and introducing these roasted pepper and onions really adds this heightened flavor to it that’s a little spicy and something you might not have experienced before.

And people are fans of the lengua?

It’s been amazing. We’re calling ourselves a taqueria, we are a taqueria, and we’re realizing, “OK, you can’t really say you’re a taqueria unless you have lengua on the menu.” We started off just getting people to try it, but I swear, from the moment we started serving the lengua to where it is now, it’s just jumped so far. People are ordering it more and more. And since we give you an option of three tacos, you can always pick three kinds. A lot of people have just been saying, “Oh, I’ll try the lengua,” and the next thing you know, they’re ordering three lengua tacos, you know? Because it is really, really tasty.

Your restaurant isn’t the only one around Lawrence to have made the transition from pop-up to brick-and-mortar in recent years. Was it about this concept of temporary dining options — pop-ups and trucks and the like — that’s become so huge lately?

Gosh, it’s hard to say. With food trucks, you have more of a freedom and opportunity to try things out. Same thing with small spots like this — having our stand on the Replay patio was kind of like, “Well, we only have enough room to make four tacos. Let’s make the best four tacos we can make.” You’re constantly trying to switch things up and challenge people with your food and see if anybody likes it, really. And in our case at the stand, we had such great feedback and great response that we felt really comfortable making this jump to opening our first brick-and-mortar spot.

You’ve been pretty clear that you’re not the chef in this endeavor. Have you learned to cook at all since opening the restaurant? I cook at home just like anybody else. Sometimes it’s good; sometimes it’s bad. But Brian actually started his first cooking job at Herbivore's, which was an old vegetarian restaurant just two doors down from here. Then he got a Julia Child scholarship from going to Johnson County (Community College) for culinary school, and then he went to Le Cordon Bleu in France. He graduated there at the top of his class, and he’s cooked in Michelin star restaurants and he’s been all over the world — he’s cooked in Australia, New York, D.C., Philadelphia. He’s been doing this for over 20 years. And then there’s me, Bartender Brad, who’s worked in some restaurants. I’ve brought some of my own knowledge to the table, but I’m learning a lot from him. I feel pretty lucky and honored that he’s my brother-in-law and that we’re doing it together, because without the food, what d’ya got, really? (laughs)

When you’re not at the restaurant, where do you like to eat?

I really love Leeway Franks. They’re similar to us in that they’re a small little spot trying to do their thing. Their food is incredible. When I was at 715, I used to say, “It’s so nice to work at a restaurant where you want to come and eat or stay for a while after you get off work.” I love that place. I love the Burger Stand a lot. I think what they’re doing over there is just perfect. It’s exactly where I want to go to watch a game and eat a burger. I love Hank Charcuterie, I love 1900 Barker, and Alchemy Coffee’s really cool as well. I love their breakfast sandwiches there in the morning on the weekends…so good. Little Saigon Café out on 23rd Street — I love that spot as well. I could go on and on. Which is nice, because I think about being in Lawrence while I was in school, which was, oh gosh, 20 years ago, and our options were like, (now-defunct downtown bar) G. Willikers. There were very few spots. There was Free State, and that was it.

You mean as far as fine-dining options go?

Yeah, basically. I love that place, too. Their beers are incredible. I could go on and on.

Note: Not wanting to leave anyone out, Shanks later added via email that he enjoys the coconut donuts at Ladybird Diner.