A thoroughly English production is slated to arrive in the Heartland this weekend — hopefully with a bang, if Ric Averill has anything to do with it.

“Chitty Chitty Bang Bang,” the hit musical loosely based on the Ian Fleming novel (yes, he of “James Bond” fame) and, perhaps more closely, the 1968 film of the same name, opens Friday at the Lawrence Arts Center, complete with dastardly villains, oddball humor and its family-friendly mix of “sweetness and vulgarity.”

“This is the American version,” Averill, the Arts Center’s longtime artistic director of performing arts, says of the “tongue-in-cheek” production, which tells the story of a widowed, down-and-out inventor who builds a flying car to amuse his two young children. 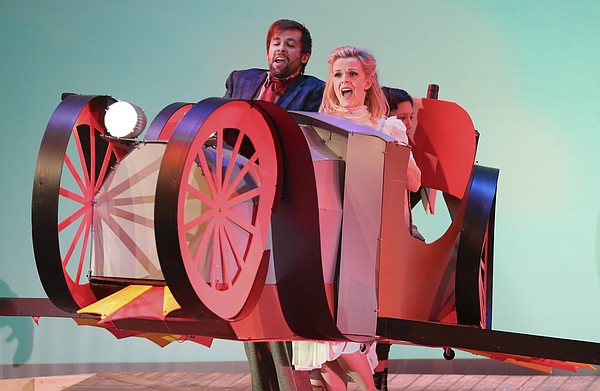 Of course, excursions ensue, and Chitty Chitty Bang Bang (that’s the car's name) leads the family through a series of fantastical — and at times, harrowing — adventures.

Fans of the movie will recognize the familiar score by Academy Award-winning “Mary Poppins” composers Richard and Robert Sherman, performed in the Arts Center’s production by musical director Patricia Ahern and the Free State Liberation Orchestra.

The special effects are similarly “old school.” While the flying car doesn’t actually fly — “except in our imaginations,” Averill points out — the Arts Center crew uses green-screen technology to project images of moving landscapes behind the vehicle that create the illusion of movement.

The set, designed and built by Kansas City artist Juniper Tangpuz, is completely made out of cardboard — from the titular car to the haircutting machine to the telephone booth.

In the Lawrence Arts Center’s production, as in the movie and Fleming novel, “everything’s larger than life,” Averill says.

Those who watched the movie adaptation (co-written by Roald Dahl, which makes perfect sense when you think about it) may recall with horror the thoroughly creepy, long-nosed Child Catcher, who captures and detains children in an underground dungeon below the streets of Vulgaria. He’s still around in the musical version.

In “Chitty Chitty Bang Bang,” the stakes are high — and very real — for the Potts kids, not unlike a “James Bond” novel or the child protagonists of Dahl’s “James and the Giant Peach” and “Matilda.”

“With Fleming and Dahl, nothing has to be particularly appropriate or whitewashed” for children, Averill says. “It’s downright dusty and gritty and fun and serious and zany, all at the same time,” he says of the musical.

The antagonists in “Chitty Chitty Bang Bang,” are, in many ways, just as vile as any of the great “Bond” villains — albeit a tad more bumbling and humorous. As Averill puts it, “they’re on a family level of ‘Dr. No.’”

Unlike Fleming’s “James Bond” tales, this story does end happily ever after. For Caractacus Potts, the hapless inventor who finds new love after loss, and for his non-traditional family, which includes a zany grandfather, played by Averill, and a lovable dog.

In other words, “family is what you make of it,” Averill says. “The family that sings together and dances together and gets silly together, stays together.”