Lee Meisel, owner of Leeway Franks, is all about quality. He describes his shop as a “nose-to-tail” operation where he breaks down whole hogs, grinds the locally sourced meat to make sausage and uses the bones to create a stock for gravy, which is then poured over hand-cut french fries.

It may come as a shock, then, to hear the former 715 butcher wax poetic about McDonald’s breakfast sandwiches. Like everything else on Leeway Franks’ menu, Meisel’s new breakfast offerings — they make their debut Saturday — are personal, driven by memories.

“The Mega Muffin is my favorite, my dad’s favorite, my brother’s favorite,” he says of his Golden Arches-inspired English muffin, Canadian bacon and egg sandwich. 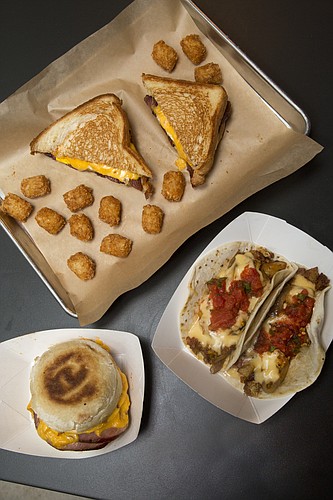 For Meisel, it evokes memories of passing through the drive-thru for a quick fill-up on the way to Saturday-morning hockey games with his father. The breakfast tacos, filled with house-made chorizo, remind him of the years he lived in Texas. The entire menu is reflective of his at-home Sunday-morning breakfast ritual he shares with wife and Leeway Franks co-founder, K.

There’s also a bit of a “hangover cure” current running through the whole thing, Meisel says. Referencing the breakfast bowl — a generous portion of hand-cut breakfast potatoes or tots smothered in sausage gravy topped with an egg and sausage link — he says, “That thing is like, meat on meat on egg…It’s larger than life.”

Leeway Franks, 935 Iowa St., is opening earlier on Saturdays (8 a.m.) to accommodate the new all-day breakfast menu, which also includes selections from locally owned Repetition Coffee. Meisel’s breakfast sandwich (sausage or bacon on Texas toast with spicy mayo, fried egg and American cheese) has always been there, and will remain available during regular hours, 11 a.m. to 7 p.m. Tuesday through Friday, too.

If all goes well, the shop might expand breakfast hours (Saturdays only for now) or start playing with the idea of biscuits and gravy, perhaps, or country-fried steak. Meisel says he’d like to tap into the neighborhood’s family-friendly vibe — folks on their way to work, parents grabbing a bite before dropping the kids off at school.

Aside from Munchers Bakery and The Merc, there aren’t many breakfast options in the area, he notes.

“We want to make our customers happy,” Meisel says. “We’ve developed a great following here … it’s our way of saying, ‘This is for you, guys.’”