Off the Beaten Plate: The Drunken Chicken at Fat Freddy's

Off the Beaten Plate is no stranger to the creatively named and often wildly indulgent pizzas at Fat Freddy’s. Remember the Wake n Bake from September 2013? Or the similarly themed Stoner Pie, which we’ve never featured but will probably make its way into my gullet at some point in this column’s lifetime?

Well, the lineage of pizzas-named-for-intoxicants continues this week with Fat Freddy’s Drunken Chicken: “Will that chicken ever lay off the booze? He’s already sauced!” reads the Fat Freddy’s menu. 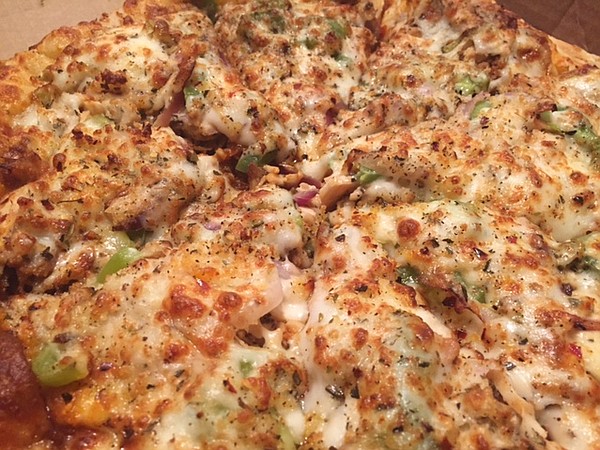 This hefty pie is sauced, which in this case carries double meaning because of the very generous amount of “Sticky Whiskey Sauce” dripping from every slice and the fact that said sauce is made with actual Jameson Irish Whiskey.

The alcohol is cooked off in the oven, of course, but the pizza still has a sort of, shall we say, zest, that’s reminiscent of whiskey. Or it could be that “hint of blue cheese.”

It’s a lot of food for most occasions, though perhaps one has to be in a certain “mindset” to truly appreciate its gluttonous majesty.

Try it with: Like a hangover, this pizza goes well with a nice nap.

Also on the menu: To quote my colleague and Off the Beaten Plate predecessor Sara Shepherd, "complete and utter food debauchery, basically." That includes more wacky pizzas like Whole Herd ("Everything that walks, nothing that flies, and absolutely NOTHING that grows in the sun," the menu says) and the Bacon Cheddar CheeseBurger, which essentially is a burger piled onto a pizza. Aside from pies, Fat Freddy's also makes chicken wings, calzones, stromboli, salads, appetizers such as "Jody's Cheesy Balls" and a half dozen versions of "Hokey Pokey Stix," which are all some variation on garlic-buttered cheesy bread.